Examining how the Missouri town of "Ferguson’s lack of diversity goes way beyond its cops," MSNBC.com's Zachary Roth examined numerous factors that had led to the city's elected officials being predominantly comprised of white folks while the city itself is roughly two-thirds African-American.

Roth explained that turnout in city elections are dreadfully low, often in the teens but dipping as low as 8.9 percent just two years ago. But of course this being the perpetually race-obsessed Lean Forward network, Roth found something sinister in the time and manner of the city's elections:

Ferguson’s election system may also be a factor. For council elections, the city has three districts, or wards, and each ward elects two members each. That means it’s edging toward an “at-large” voting system, in which there are no districts at all, and all candidates face the whole electorate. Numerous jurisdictions around the country have used such systems to reduce minority representation, since it makes it harder for numerical minorities to elect their preferred candidates.

Then there’s the school board. Ferguson shares a board with neighboring Florissant, which is mostly white. And the district uses an at-large system to elect its seven members. The result: Until earlier this year, the board had no black members.

Earlier this year, the board ousted the district’s first ever African-American superintendent, Art McCoy a move that triggered protests in the black community. Yet in April, the two white board members who stood for re-election were duly voted back in (an African-American candidate was also elected to replace a retiring member). One of the re-elected whites declared afterward that he saw his victory as vindication in the controversy over McCoy’s ouster.

It doesn’t help that Missouri’s city council and school board elections are held in April, rather than in November when they would coincide with state or federal contests. That arrangement leads to lower turnout across the board, but especially among racial minorities. Some southern cities have been accused of deliberately moving their municipal elections to the spring or summer in order to reduce black turnout.

Isn't it racist to presume black voters will only come out to vote for federal elections held in November? Talk about your "soft bigotry of low expectations."

At any rate, you may notice that Roth linked to himself in a November 22, 2013 story, "Georgia GOP dusts off Jim Crow tactic: Changing election date." Yours truly addressed that nonsense at the time here.

Political engagement often begins with charity and civic engagement. Politicians tend to get their start in local office after having been active in church, charity, and civic pursuits -- firehouse fundraisers, PTAs, etc. The citizens of Ferguson, Missouri -- regardless of color -- are perfectly free to get involved in civic organizations and begin building a portfolio of public service which stands them in good stead to win local elections.

There is a fascinating discussion that could be had about how to ensure all the citizens of Ferguson, Missouri, are more engaged in civic improvement, regardless of their ethnic or socioeconomic background. It's just very unlikely you'll see a measured, reasonable discussion of that from MSNBC. 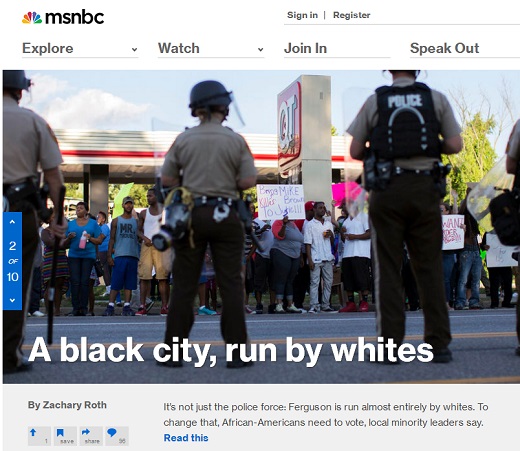