The evening newscasts of all three broadcast networks tonight reported on the unanimous decision in NLRB v. Noel Canning in which the U.S. Supreme Court found that President Obama overstepped his constitutional authority in making recess appointments when the U.S. Senate was technically in session. Rather than couching the ruling as a stunning rebuke of presidential overreach by Mr. Obama, however, coverage on CBS and NBC made it sound like an intrusion on presidential prerogative. ABC's Terry Moran described the ruling as the Court saying "no, no president has [the] power" to make recess appointments when the Senate declares itself to be in session (no matter how sparsely attended).

By contrast a search of Nexis transcripts reveals that on June 28, 2004, when the Supreme Court reached a 6-3 decision in Hamdi v. Rumsfeld -- a Fifth Amendment due process case regarding an American citizen captured in Afghanistan as an enemy combatant -- the network evening newscasts hailed the ruling as "a real blow to the Bush administration" (ABC's Charles Gibson), a ruling that "struck at the very core of the way President Bush has been conducting the war on terrorism" (ABC's Manuel Medrano), with "the justices... say[ing] the Bush administration cannot expect the courts to stay on the sidelines in the war on terror" (NBC's Pete Williams).

Only CBS's Evening News elected to tease the recess appointments case in the opening credit roll and only CBS devoted a separate full story to the ruling rather than shoe-horn it into a report on the Court's unanimous finding in the abortion "bubble zone" case McCullen v. Coakley.

"Tonight, can abortion protesters be barred from clinics? The Supreme Court ruled on that today, and voted to limit the power of the president," anchor Scott Pelley teased, promising stories by Jan Crawford and Bill Plante respectively.

Minutes later, setting up Plante's story, Pelley told viewers that "the Supreme Court limited the president's power to make political appointments that require the consent of the Senate."

"The Court said three appointments the president made to the National Labor Relations Board in 2012 were illegal because the Senate was on a three-day break, and that was too short to qualify as a recess." Plante then informed his audience of President Obama's side of the story, that the "so-called pro forma sessions... were part of an ongoing tactic by Republicans to prevent him from filling the vacancies, which he complained about frequently."

At no point, however, did Plante remind viewers that the pro-forma session tactic was devised and implemented originally by Senate Majority Leader Harry Reid during the waning years of the Bush administration. ABC's Terry Moran and NBC's Pete Williams likewise failed to make mention of that during their reporting this evening, although Williams's language seemed to subtly suggest that Democrats had used it before to their advantage during Republican administrations (emphases mine)

So that means the Senate can block recess appointments whenever it wants.

In his brief summation of the NLRB ruling, ABC's Terry Moran couched the ruling in a tone that made it sound like a hypothetical moot court exercise about the limits of the recess-appointment power (emphasis mine):

Another big ruling here today: President Obama losing in this court on whether he or any president has the power to make high-level appointments when only a few senators are in session. Or does he have to wait for the full Senate to confirm his nominees? The president trying to bypass partisan gridlock, but today the Court unanimously again saying no, no president has that power. 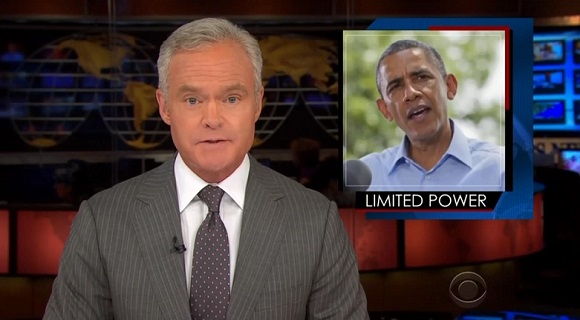