Wendy Davis would love to be the next governor of the state of Texas. She'd also probably love to retain the unquestioned doe-eyed adoration of MSNBC. Those aspirations might be at cross-purposes, however, especially as Davis is tacking to the right on gun rights and abortion in order to pass herself off as a centrist Democrat.

The Lean Forward network might be able to hold its nose on the former, but abortion is too sacrosanct and central to the "war on women" meme. Witness MSNBC's resident "Champion of Choice" Irin Carmon, who complains today that "Wendy Davis falls into [an] abortion question trap" with her backpedaling as regards the late-term abortion ban which she filibustered.

Of course, Carmon painted Davis's problem as one of sloppy, inconsistent messaging and not the need to back away from being defined by a radical abortion rights-absolutist agenda (emphases mine):

This week, Texas gubernatorial candidate Wendy Davis delighted her detractors and confounded her pro-choice supporters when she appeared to support the very same 20-week ban she spent 11 hours filibustering.

Davis’ remarks to the Dallas Morning News that she would have voted for a ban with a broader health exception than the one in force – i.e., not an actual reversal, though it wasn’t terribly clear – were promptly represented as “flip flopping.” More accurately, they represent Davis falling into a trap set for her by abortion opponents, a place of awkward hairsplitting on unpopular later abortions.

The ban on abortion after 20 weeks was one part of the omnibus abortion bill that Republicans forced through in a second special session of the Texas legislature. The bill also included medically unnecessary restrictions on which doctors can provide abortions and where, as well as how they can administer medication abortions. (The 20 week ban is unconstitutional under current Supreme Court precedent, but for strategic reasons, it has not been challenged in court as the other provisions have, and is currently in force.)

According to the Dallas Morning News, which did not release a transcript of the full conversation, Davis said of the 20 week ban, “It was the least objectionable…I would have and could have voted to allow that to go through, if I felt like we had tightly defined the ability for a woman and a doctor to be making this decision together and not have the Legislature get too deep in the weeds of how we would describe when that was appropriate.”

Davis pointed to the fact that many such later abortions occur when fetal anomalies are discovered or when there is a health risk to the woman. She said, “I would line up with most people in Texas who would prefer that that’s not something that happens outside of those two arenas.”

Is that different from her position during the filibuster? Not really. Here’s what Davis said about the 20 week ban in her own words, according to a transcript:

“Number one, and most importantly, from our medical community we’ve heard the concern that this interferes with the practice of medicine. As important, we know that concerns have been raised that this ban interferes with a woman’s health care decision before she and her doctor may have important health information about her own health and the health of the pregnancy.

The ban will have devastating consequences when a woman is experiencing medical complications. And unfortunately, it bans abortion before a woman may receive important information about her own health and the health of her pregnancy. Fewer than 2% of abortions occur after 20 weeks, and while they are uncommon, it is important that a woman and her doctor have every medical option available.”

That “important information about her own health and the health of her pregnancy” is intentionally vague, but it includes the kinds of cases that abortion opponents find unacceptable. That could mean a fetus with a severe abnormality but that doesn’t incontrovertibly mean immediate death after delivery. Or it could be a woman who is diagnosed with cancer late in a pregnancy and has to choose between foregoing treatment that would harm a fetus and a later abortion. While not all later abortions involve such cases, a broad health exception would cover them.


It’s far too late for Davis to shy away from abortion rights,  including the more politically uncomfortable parts, after confronting them head-on in her filibuster. Regardless of what she was trying to say, a political campaign isn’t a great place for complex or nuanced moral conversations. On the campaign trail, Davis would likely be better off if she stuck to the broader point she made in her filibuster: “The alleged reason for the bill is to enhance patient safety. But what [the provisions] really do is create provisions that treat women as though they are not capable of making their own medical decisions.”

At any rate, Davis continues to hit significant bumps in the road on her campaign, which suggest she might not be ready for prime time and could be denying a more credible Democratic challenger from having a better shot at besting the Republican opponent, Texas Attorney General Greg Abbott.

Come inauguration day next year, Republicans will have held the Texas governor's office for  20 years, and a truly socially centrist Democrat could stand some chance of winning the governor's race this year, certainly more so than a gaffe-prone liberal favored heavily by the liberal New York/Washington media establishment.

Of course, that point is moot. With the filing deadline long since passed, it's simply too late for Plan B. 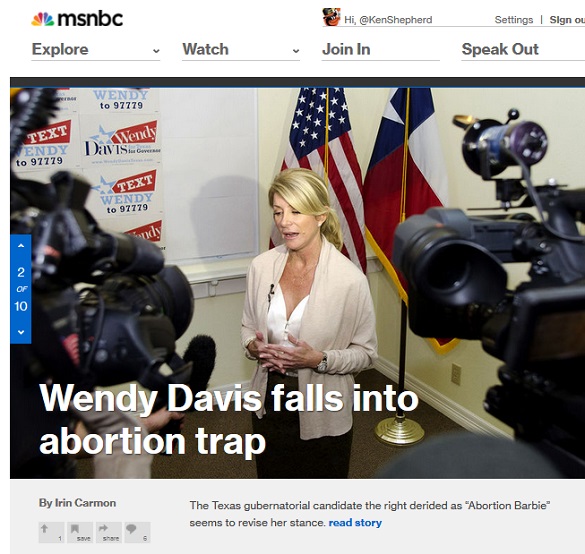