There was a reference to "genocide" in the story, but that was from a quote from a Cuban official railing against the U.S. trade embargo with Cuba (emphasis mine):

When President Obama rose to speak on Tuesday at the packed memorial for the late Nelson Mandela, most watching likely anticipated the tribute from America’s first black president to the life and legacy of South Africa’s would be historic. And it was.

But something unexpected and extraordinary happened before Obama even reached the podium–he stopped to shake hands with Cuban President Raul Castro, leader of America’s long-isolated Cold War rival.

More than a half-century has passed since the U.S. severed ties with its island neighbor after diplomatic relations soured under the communist regime of Castro’s brother, Fidel. To this day, the U.S. maintains an economic embargo against Cuba, which Cuban Foreign Minister Bruno Rodriguez recently claimed has cost the country more than $1 trillion and qualified as “an act of genocide.”

But Tuesday’s handshake before mourners numbering in the tens of thousands signaled a potential shift in U.S.-Cuban relations, and–more than anything–the enduring power of Nelson Mandela to bring together those long-estranged by ideological differences. Said a White House official in a statement:

“This wasn’t a pre-planned encounter. Above all else, today is about honoring Nelson Mandela, and that was the president’s singular focus at the memorial service.”

So the White House itself is strongly downplaying the notion that the handshake is any sign of a significant change in foreign policy towards the Communist regime anytime soon, but Margolin just couldn't help herself.

Margolin also omitted how one portion of President Obama's speech today could definitely be notable as a rebuke of regime's like Castro's Cuba (emphasis mine):

The struggles that follow the victory of formal equality or universal franchise may not be as filled with drama and moral clarity as those that came before, but they are no less important. For around the world today, we still see children suffering from hunger and disease. We still see run-down schools. We still see young people without prospects for the future. Around the world today, men and women are still imprisoned for their political beliefs, and are still persecuted for what they look like, and how they worship, and who they love. That is happening today.

And so we, too, must act on behalf of justice. We, too, must act on behalf of peace. There are too many people who happily embrace Madiba’s legacy of racial reconciliation, but passionately resist even modest reforms that would challenge chronic poverty and growing inequality. There are too many leaders who claim solidarity with Madiba’s struggle for freedom, but do not tolerate dissent from their own people. And there are too many of us on the sidelines, comfortable in complacency or cynicism when our voices must be heard.

Of course, that's excellent rhetoric which doesn't seem to be supported by action. Alan Gross is still languishing in a Cuban prison while the Obama administration is still making excuses for its lack of success. All the while, Obama-boosting media outlets like MSNBC.com don't seem to know about it, much less give a damn. 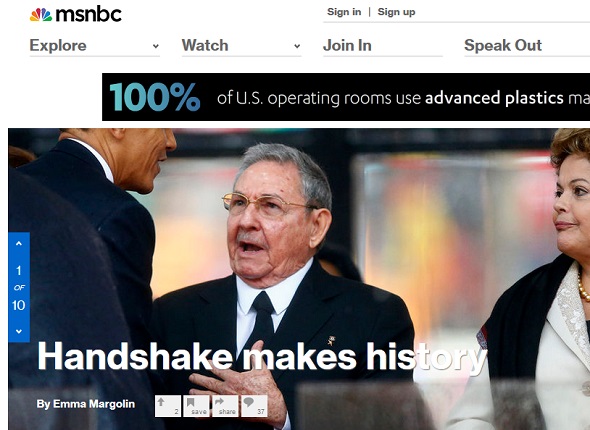