Of course, Schwartzman opened his story with and seemed chiefly concerned about the Cuccinelli camp's creative swipes at McAuliffe, whom, you may recall Schwartzman portrayed as "laid back" and "easygoing" in a puffy July 29 article:

On an otherwise serene Sunday recently, Virginia’s gubernatorial candidates were embroiled in the kind of needling and jabbing that is defining their race to lead the commonwealth.

The subject: whether Democrat Terry McAuliffe proved that he’s masquerading as a Virginian when he said a highway along the southern edge of the state — Route 58 — needs to be widened to four lanes.

“Grab the popcorn,” Attorney General Ken Cuccinelli II’s team announced in an e-mail to reporters just after noon, promising the “World Premiere” of a video with a “new reminder” of McAuliffe’s “lack of Virginia knowledge.” Route 58, the Republicans insisted, is already four lanes.

McAuliffe’s team, in its own e-mail at 1:41 p.m., dismissed the film as “false” and accused Cuccinelli of caring “more about attacking his opponent than he does about the truth.”

The Republicans weren’t finished: “McAuliffe’s Route 58 blunder” was the title of their next attack at 4:20 p.m.; McAuliffe’s “Route 58 mess” arrived at 8:06 p.m. More than eight hours after the spat began, McAuliffe’s spokesman tweeted: “Still marveling at the amazing swing and miss from the Cuccinelli campaign today.”

Even by the standards of modern political combat, the race to succeed Gov. Robert F. McDonnell (R) is an ugly contest between two candidates who are devoting vast resources to disparaging each other as unsuited for the job.

Every day, it seems, Cuccinelli’s forces find ways to portray McAuliffe as an unethical and unprincipled carpetbagger, a political opportunist who doesn’t possess the government experience or knowledge of Virginia needed for the state’s top job.

At the same time, McAuliffe’s team pounces at the chance to depict Cuccinelli as a conservative zealot who is anti-gay and anti-woman and whose views on social issues are too extreme for a state evolving into a hub of cosmopolitan life.

Of course, Schwartzman (pictured below at right, photo via Schwartzman's Twitter account) failed to excerpt any of those negative McAuliffe ads, nor to find anyone to denounce them as misleading, as he turned instead to predictable, boiler-plate pablum about voters despising negative campaigning:

“Where’s the meat in the campaign?” asked former governor L. Douglas Wilder (D). “They both need to repair the perceptions of them in the general public. But you don’t repair it by tearing the other guy down.” 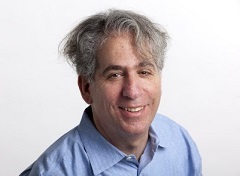 Voters “are sick of it,” Wilder said. “They want to know what you’re going to do about the economy, jobs, spending. How are you going to make governance better? You don’t hear that. You hear negatives — Boom! Boom!”

Time magazine proclaimed the race “The Dirtiest, Nastiest, Low-Down Campaign in America,” one that has drawn comparisons to the polarization of the U.S. Congress and the 2012 presidential contest.

“We’re looking at the Washingtonization of Virginia politics,” said Stephen Farnsworth, a University of Mary Washington professor. “The nasty partisan attacks, the astonishing gridlock that marks the nation’s capital is increasingly the shape of Virginia, as well.

“If you want collisions, you’re living in the right time,” Farnsworth said, comparing the campaign to a NASCAR race. “But if you want a government capable of dealing with problems and coming up with solutions, maybe the car crashes aren’t so great.”

That's an incredibly paint-by-numbers approach to this meme and it comes up every election cycle, but when it comes to Virginia politics, the Post had an additional little spin.Virginia is a genteel Southern state and prides itself on gentlemanly political debate, not this ruffian nonsense:

Virginia has had bitter campaigns before, perhaps the best example being the 1994 Senate race in which “liar” was among the many insults Col. Oliver L. North and Charles S. Robb traded.

Yet the commonwealth remains a state saturated with Southern-style politeness, and its political culture is relatively genteel. Issues often have driven the state’s gubernatorial races, whether it was James S. Gilmore III’s proposal to eliminate the car tax in 1997, or Mark Warner’s pledge to repair the state’s finances in 2001, or McDonnell’s promise to create jobs in 2009.

Again, Schwartzman conveniently forgets how Democratic candidate Creigh Deeds, and the Washington Post, were obsessively focused on Bob McDonnell's master's thesis, which they alleged was proof positive that the Republican then-Attorney General was a troglodyte who opposed women in the workplace, etc. This was the "war on women" three years before anyone knew who Sandra Fluke was. Only, unlike in 2012, it utterly backfired in 2009 on the state level in the Old Dominion.


To his credit, Schwartzman did go on to quote former Rep. Tom Davis (R-Va.) as challenging the conventional wisdom that negative campaigning hurts political engagement by the electorate. And Schwartzman also noted  that "[n]either side agrees on who initiated the nastiness," before giving both sides' versions:

Cuccinelli’s supporters say that Democrats started it in February when they staged mock readings of the attorney general’s book, “The Last Line of Defense,” which laid out his conservative views.

McAuliffe’s team says that Cuccinelli’s loyalists first attacked in April, when the Susan B. Anthony List, an antiabortion group, paid for a radio ad describing McAuliffe as “far outside the mainstream.”

Still, as Schwartzman wrapped up, he dropped further hints that the Cuccinelli camp was the truly venomous side, with strategists like Chris LaCivita, who "advised the Swift boat veterans who attacked John Kerry when he ran for president in 2004" and for that has "become the target of Democrats' ire."

Leaving aside the legitimacy of the complaints of swift boat veterans still seething over Kerry's slanderous anti-war congressional testimony, Schwartzman failed to see any such alleged character assassins on team McAuliffe.