The liberal media are not really "up in arms" with the Obama administration, but are simply having a "lover's quarrel" over the AP scandal in particular, NewsBusters publisher Brent Bozell told CNBC host Larry Kudlow on his May 16 The Kudlow Report program.

What's more, it won't be that long until "[t]he Bill Clinton syndrome is going to be upon us, where it's time to move on, we've covered it [the media will say] and they're going to turn the fire right on Republicans as being obstructionists. Mark my word," the Media Research Center founder predicted. [watch the full segment below the page break] 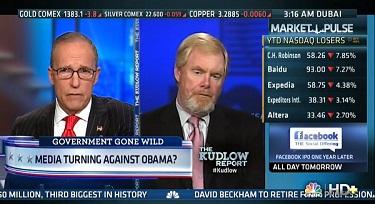 "Go back to the Clinton years and the alphabet soup of scandals involved with Clinton. Now think about the investigation that went into those scandals. It was virtually non-existen[t]," from the media, Bozell reminded Kudlow.

"They would report what they had to report that someone else might investigate. But the zeal of going after Watergate with Woodward and Bernstein, that hasn't been there in" neither the AP, IRS, nor Benghazi scandals, the MRC president noted.

"Why [hasn't] anyone in the press found anybody" who survived the attack on the Benghazi consulate to interview, Bozell wondered, asking Kudlow, "Do you realize we haven't interviewed anyone [that was] there [during the attack on September 11]?"