Every now and then a liberal newspaper can pleasantly surprise us. Today is one of those days, although as I explain later, our praise is qualified. In a 27-paragraph story in Monday's edition, staffers Sandhya Somashekhar and Lena Sun noted a recent sting video by pro-life group Live Action wherein Washington, D.C. abortionist Cesare Santangelo admitted that "in the unlikely event that an abortion resulted in a live birth, 'we wouldn't help it.'"

"[T]echnically, you know, legally, we would be obligated to help it, you know, to survive, but it probably wouldn't," Santangelo told the 24-week pregnant woman in the Live Action video. In a subsequent interview with the Post, Santangelo sought to spin what folks could see on the hidden camera expose.

"What I said is, basically, I wouldn't do anything extraordinary.... We would call EMS. We would call 9-1-1. But I wouldn't do intubation or anything.... You let nature take its course," Somashekhar and Sun quoted Santangelo, an OB/GYN who graduated from George Washington University Medical School 31 years ago.

Somashekhar and Sun took pains to present Santangelo's side of the story, as well as to note that "[n]o authorities have accused Santangelo of violating the law." 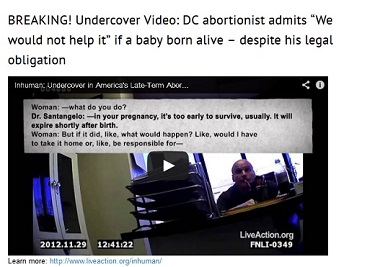 But in doing so, the Post scribes did leave unchecked an absurd complaint by the abortionist's lawyer, Alfred F. Belcuore, who slammed Live Action for recording "a private exchange between a physician and his patient" that amounts to "an outrageous intrusion upon the doctor-patient relationship."

As any lawyer worth his salt would tell you, doctor-patient privilege is designed to protect the patient, not the doctor.

Somashekhar and Sun also buried in the 10th paragraph a note about how the new Live Action video "shows an unidentified worker in the Bronx saying the clinic would put the baby in a jar of 'solution' that would cause it to stop breathing."

Add on top of that the fact that editors failed to include any photos or still images from the Live Action shoot in the article and that the print headline for the below-the-fold story was hardly attention-grabbing. "Antiabortion group tapes remarks on live births," is not as arresting as say "Abortionist: 'We would not help' baby born alive," would have been. The headline on the jump page, where the article concludes, is "Group releases video from abortion clinics," again, not really attention-grabbing.

Live Action president Lila Rose was given just one quote early in the story and was not returned to for further comment later in the story. By contrast, Santangelo was allowed to close with a parting shot in which he tagged Rose and Live Action as "terrorists," a rather poor and offensive choice of words, especially in light of a real act of terrorist that killed three and maimed hundreds just two weeks ago in Boston:

He said he was “tripped up” by a hypothetical at a moment when he was trying to reassure a client. “Once the baby is born, it’s out of everybody’s hands, and the baby has rights, too,” he said. “I understand that and I support that.”

He said he has not watched the video because “I don’t like to feed into these people. I really consider them terrorists.”

While it was good of the Post to report on the Live Action video, it's abundantly clear that Sun and Somashekhar helped Santangelo promote his spin on a story the Post could have just as easily ignored altogether. At the end of the day, that's a minor victory given how pro-abortion rights the Washington Post is editorially.