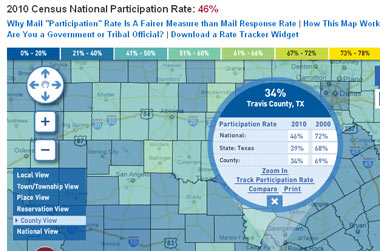 MSNBC's Chris Matthews today jumped on a statistic regarding Census participation in Texas to argue that anti-government sentiment from TEA Parties is hurting the Lone Star State in the decennial head count and hence could shortchange the state in congressional reapportionment and redistricting:

CHRIS MATTHEWS, "Hardball" host: Time for the "Big Number" tonight. It speaks to the unintended effects of sowing distrust about the federal government. Thirty-four percent of Americans nationwide have filled out and returned their U.S. Census forms. But what's the number like in Texas, one of the more conservative states out there? According to the Houston Chronicle, just 27 percent. Well below the national average...

However, the Chronicle article that noted the 27 percent statistic also noted that:

In Harris County, the response rate is 23 percent. Houston's returns are running at 21 percent.

Those jurisdictions, particularly the city proper of Houston, are more liberal in electoral habits than the state writ large, and yet they have a lower response rate when it comes to Census participation. That sure doesn't fit Chris's meme.

What's more, it appears that the Chronicle's numbers --which are from Friday afternoon -- are outdated, according to none other than the U.S. Census Bureau. The Bureau's Web site as of 5:55 p.m. EDT today noted that the national "participation" rate is 46 percent, whereas Texas clocks in at 39 percent.

Again, more liberal jurisdictions like Harris County and Travis County -- home of liberal capital city Austin -- clock in below the statewide average at 35 and 34 percents respectively.

What's more, while the much bluer (politically speaking) state of New York has a 41 percent participation rate, New York City proper has a paltry 32 percent, a full seven points below Texas's statewide average.