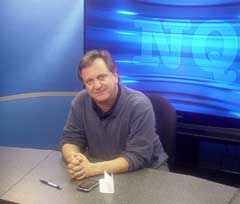 For years and years I'd hear my friends from the Left say how evil and horrible and racist and imperialistic and oppressive America is, and I'd chuckle to myself and think, "Oh, they always say that; they love America." Then on 9/11, we were beaten up, and when I grabbed them by the collar, and I said, "Come on, let's help her. Let's help America," and they said, "Nah, she deserves it."

What I discovered is that the Modern Liberal looks back on 50,000 years, 100,000 years of human civilization, and knows only one thing for sure: that none of the ideas that mankind has come up with--none of the religions, none of the philos­ophies, none of the ideologies, none of the forms of government--have succeeded in creating a world devoid of war, poverty, crime, and injustice. So they're convinced that since all of these ideas of man have proved to be wrong, the real cause of war, pov­erty, crime, and injustice must be found--can only be found--in the attempt to be right.

If nobody ever thought they were right, what would we disagree about? If we didn't disagree, surely we wouldn't fight. If we didn't fight, of course we wouldn't go to war. Without war, there would be no poverty; without poverty, there would be no crime; without crime, there would be no injustice. It's a utopian vision, and all that's required to usher in this utopia is the rejection of all fact, reason, evi­dence, logic, truth, morality, and decency--all the tools that you and I use in our attempts to be better people, to make the world more right by trying to be right, by siding with right, by recognizing what is right and moving toward it.

When this first started to dawn on me, I would question my Liberal friends--and believe me, there were plenty of them in Hollywood. The thing about Hollywood is that it is overwhelmingly Liberal: upper-case "L," not lower-case "l." There are a lot more of us conservatives than you would suspect, but they are afraid. It's hard to come out because what's so Orwellian--and virtually everything about this philosophy is Orwellian--is that the Lib­erals are as illiberal as you can imagine. As much as they scream "McCarthyism," there is a "graylist" there that sees people not get hired because they don't toe the Leftist line.

What you have is people who think that the best way to eliminate rational thought, the best way to eliminate the attempt to be right, is to work always to prove that right isn't right and to prove that wrong isn't wrong. You see this in John Lennon's song "Imagine": "Imagine there's no countries." Not imagine great countries, not imagine defeat the Nazis, but imagine no religions, and the key line is imagine a time when anything and everything that mankind values is devalued to the point where there's nothing left to kill or die for.