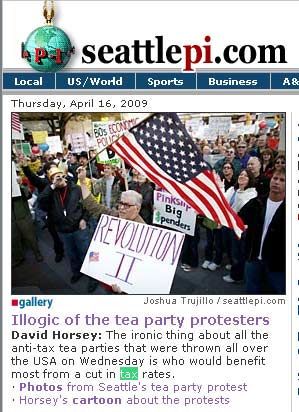 The Seattle Post-Intelligencer, which since mid-March has been published solely online, greeted visitors to its Web page today with links to opinion pieces or cartoons critical of the April 15 Tea Parties (see screencap at right).

In the upper right-hand corner, under a picture of Seattleites at a tea party protest, were links to

No ostensibly objective news stories by P-I staffers covering the protests were teased.

Many suspected it. Now we know it.

A study released by the Pew Research Center's Internet & American Life Project shows that 33 percent of people who read news online about the 2008 presidential election sought out sources that shared their political points of view -- up from 26 percent in 2004.

"While the largest increase on this measure occurred among the young," read a news release, "those who are the most information hungry and engage most deeply in the online political debate also show an increased tendency to seek out political information that matches their existing point of view."

The study also showed that the percentage of Americans who rely on the Internet as a major source of campaign news has more than doubled since the 2000 election and that online supporters of Obama tended to be more engaged with the online political debate than supporters of John McCain.

Fifty-five percent of all adults went online for election news, according to the study, which uses data from a survey of 2,254 adults conducted in late 2008. Read it here.