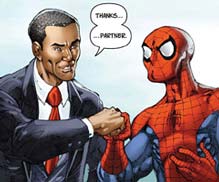 Updated below: In late 2001, "Punisher" storyline had threat against President Bush's life.

Spider-Man will swing to the rescue at the Obama inauguration in the Marvel comics universe, USA Today's David Colton reported in a January 8 story for the newspaper's Life section. Colton's story sought to portray the move not merely as a money-maker for Marvel but part of a storied tradition of graphic novel artists of including the commander-in-chief in comic book cameos:

In a growing world of Barack Obama collectibles, one item soon may be swinging above the rest.

On Jan. 14, Marvel Comics is releasing a special issue of Amazing Spider-Man #583 with Obama depicted on the cover. Inside are five pages of the two teaming up and even a fist-bump between Spidey and the new president.

In the story by Zeb Wells, Todd Nauck and Frank D'Armata, Spider-Man stops the Chameleon from spoiling Obama's swearing-in. At one point, Spider-Man says he mistook Vice President-elect Joe Biden for the Vulture (a vintage Spider-Man villain).

Presidents have been supporting characters in comics before: During World War II, superheroes fought Hitler as Franklin D. Roosevelt cheered them on. John F. Kennedy appeared in Action Comics #309 in 1963, when he helped protect Clark Kent's secret identity.

"If I can't trust the president of the United States, who can I trust?" Superman tells Kennedy.

Colton later noted that "[p]residents have appeared as more shadowy figures in recent years," but then turned to Marvel Comics editor-in-chief Joe Quesada to protest that he and his artists and writers "do our best to be completely non-partisan and treat presidents with respect."

Update (15:12 ET): An e-mail tipster pointed me to a FrontPageMagazine.com article from May 12, 2004 by Michael Lackner, who noted that in one storyline in late 2001, a Marvel comics character threatened President Bush in the Oval Office:

The Punisher, Marvel Comics’ avenging vigilante, has become a radical. As well as taking out organized crime kingpins and thugs, he’s now taking on U.S. Intelligence and undermining support for the War on Terrorism.  The publication of these comic book polemics coincides with the April release of the feature film “The Punisher” starring Thomas Jane and John Travolta.

Leftist propagandizing is not new to Marvel, nor to the author of the Punisher series, Irishman Garth Ennis.  Two months after September 11th, the Punisher was featured threatening the life of President George W. Bush.  The story portrays the President as a slobbering belching incoherent drunk, gleefully itching to launch nuclear missiles.  The Punisher breaks into the Oval Office, tosses a nine-millimeter bullet before the President and warns ominously, “I can get in anywhere …Nine millimeters.  I’m never further away than that.”  Yes, you’ve got it right – Marvel published a threat to assassinate the President of the United States, only weeks after September 11th.  Even viewed as sick humor, the tenor and timing of this piece was inexcusable.