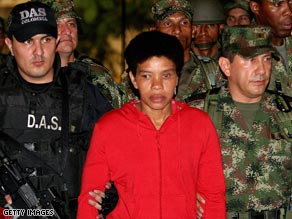 The Revolutionary Armed Forces of Colombia (FARC) is a drug-trafficking terrorist group that has vexed Colombia's government and citizenry for years. Yet the T-word was missing from a May 19 CNN.com article regarding the surrender of FARC Force 47 commander Nelly Avila Moreno, although Colombia's recent military pressure was cited by Moreno as the cause of her surrender:

[Moreno] said she and her longtime male companion made the decision jointly to abandon the FARC group, based in the jungle, at 5 a.m. Sunday.

She said pressure from Colombian soldiers had been key to their decision, and she called on her fellow rebels to follow her example.

"I invite them to change the sensibility that is among the guerrillas," she said, seated by her companion, who said nothing during the news conference.

CNN went on to note that Moreno, whose "nom de guerre was Karina," may be personally responsible for a bus hijacking and arson in 2004, as well as the maiming of a passenger on that bus:

"The commander of that guerrilla group -- a dark-haired woman, tall, with one eye missing -- called herself Karina," [victim Miguel Antonio Paez] said.

"She ordered me tied up. Here, I have the marks from the wires, and there, while I was tied up, she lopped off my penis and testicles and I remained castrated for all my life."

Despite that instance of brutality and FARC's history of terrorism, the word "terrorist" or "terror" was not used in connection with Moreno or FARC in CNN's 22-paragraph story.

Photo of Moreno by Getty Images via CNN.com.