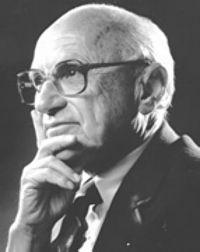 PBS tonight airs a documentary on the late Milton Friedman, and perhaps surprisingly enough, the taxpayer-funded network did a good job. [check here for local listings]

UPDATE: You know it's gotta be good. NY Times reviewer Ginia Bellafante panned it for being too worshipful of the free market advocate. And yes, your eyes deceive you not, she found a downside to ending the draft (Friedman opposed military conscription, favoring an all-volunteer force).

Below is an excerpt from a review published to the BusinessandMedia.org Web site by Hillsdale political economy professor and BMI advisor Dr. Gary Wolfram.:

"The Power of Choice," a documentary on the life and ideas of Milton Friedman, is an excellent film, but it should have been titled "The Power of Ideas." It is the inspiring story of how a son of poor immigrants by the power of his ideas changed the lives of millions of people for the better.

Milton Friedman was a true champion of freedom, as the film makes clear, because he not only had ideas but advanced them in the face of unrelenting hostility. Gary Becker, another Nobel Laureate, explains that Friedman was able to persevere and have such great influence because he was an optimist, his analysis was clear and straightforward, and he felt he was right.

The film is fascinating and well done. It begins by showing the modern and , reflecting on how the average citizen in these countries has prospered due to the movement to a market economy. It then interviews political and business leaders in the two countries who make it clear that the success of their economies is the result of the ideas of one economics professor from the . and are being transformed by these same ideas, creating wealth in these countries unimagined a few years ago.