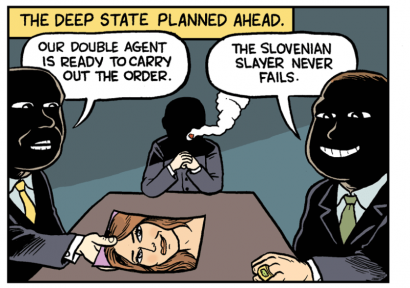 As portrayed by cartoonist Matt Bors, the best case scenarios following the 2016 presidential election are either that Trump lose the election as a result of recount efforts, is subsequently assassinated, impeached or that everyone dies as a result of a nuclear holocaust.

“Fusion's Dodai Stewart has declared the organization wants to be the 'voice of the resistance.' Instead, with a cartoon like this, it acts like Fusion wants to be the voice of extremism. Remember, Trump has already received death threats, had at least one assassination attempt and another liberal charge him on stage during the campaign. It’s the responsibility of alt-left sites like Fusion to keep from further inflaming the situation.”

“If President-elect Obama had been the subject of a cartoon like this by conservatives eight years ago, the howls against such a sick display of hate and incitement to violence would have reached high heaven. If Fusion’s management has any sense left, they should immediately order that the cartoon be taken down. If Fusion, which continues to shed both viewers and employees, is to survive, they would also do well to finally turn away from the dark path they are on, and stop demonizing conservative political and social views, and the people who hold them. The last thing Fusion should be doing right now is doubling down on a far left, ideological diversity-rejecting editorial agenda – which has proven to be an abject failure and has done nothing but alienate millions of conservative millennial viewers throughout the country.”