Remember “Julia?” She was the 2012 Obama Campaign’s creepy make-believe cartoon woman who was showered cradle to grave with President Obama’s welfare-state largess. In fact, the federal sugar-daddy was so bounteous and (we presume) so emotionally fulfilling that Julia lived, worked, gave birth and grew old without ever meeting a man, let alone marrying one.

That liberal feminist utopia is closer to reality than it’s ever been, much to the delight of The Daily Beast’s Paula Szuchman. Her Aug. 21 article on the site’s “Women in the World” lionized a generation of Julias – single moms who opted for in vitro fertilization and single motherhood. 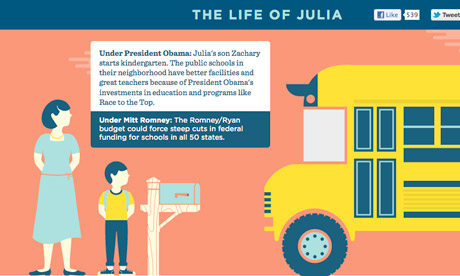 In “No Dad? No Problem. Meet the Moms Who Opt In Forever – and Aren’t Complaining,” Szuchman began with the story of 35-year-old Talia Braude and her 10-week-old baby. “If this isn’t the life Talia dreamed of back when she was 23, dating men she thought she might one day settle down with, then it’s a pretty f**king good alternative,” declared Szuchman.

Praising these do-it-themselves heroines, Szuchman gushed, “They work. They raise their kids. And they do it all solo.” These IVF (in vitro fertilization) single moms are, she continued, “more likely to be independent, financially stable, and making an active choice to raise children by themselves.”

What’s not to admire about superwomen like Braude, Szuchman argued: “She can’t quit her job to stay home with Rian; there’s no one else around to pay the mortgage. She can’t go part time, either—at least not until he’s out of college.”

But if you hadn’t guessed, the Szuchman found plenty of women to say that that the costs don’t outweigh the benefits. Forty-one-year-old Jennifer Whitney clarified that besides focusing on a career, “The beauty of being an SMC is we don’t have to be beholden to anyone else’s decision making about our lives.” Other women stressed that stressed that being single helped their careers and gave them the chance to “come home and focus on one thing” unlike couples who sweat at maintaining a relationship.

A “defining trait” of these women, according to said Rosanna Hertz, a sociology and women’s studies professor and author of “Single by Chance, Mothers by Choice,” is “how much they planned for, and thought about, life as a parent before they took the plunge.” Unlike married women who “have a license to do it,” these women had to do advance-work. “You ask friends and family to get on board and help you out,” she continued, “You’re already creating a village and not expecting to do it all alone.”

Szuchman – and Hertz – failed to mention any negative impact on the kids. According to the non-profit National Fatherhood Initiative organization, children without fathers were almost four times as likely to live in poverty, exhibited higher levels of aggressive behavior, held a higher chance of being incarcerated, raised the risk of teen pregnancy, and negatively affected drug and alcohol abuse, health, education, as well as obesity. While their mothers’ relative affluence may mitigate some of those problems for the kids of Szuchman’s subjects, two-parent households are far healthier environments for children.

But what does that matter to women who’ve removed the annoyance of having a man around? Thirty-eight-year-old Abigail Wolfson summed up the attitude nicely: “My life is totally drama free.” She emphasized, “I get to raise my child however I want. There’s no stress, no tension about child-rearing choices. Now I’m happy all the time.”

And that’s good enough for the Daily Beast. Of course, Szuchman’s article may provide an insight into why Daily Beast writers think everyone’s kids spend all their time sexting …