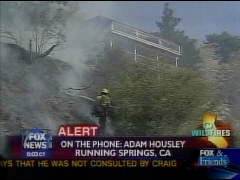 Fox News, just as Glenn Beck previously, picked up on an observation that the rest of the mainstream media largely ignored: brush left in place under environmental groups’ pressure fueled much of the fires in southern California. While all of the network’s morning shows ignored this angle (NBC’s "Today," ABC’s "Good Morning America," and CBS’s "The Early Show") the October 25 edition of "Fox and Friends" contained this report from Adam Housley.

"One of the fires up here, near Big Bear hasn't burned that many homes. And we're being told it's because of the forest clearing plan that's been very controversial. We reported on this in years past. There are some certain extreme environmental groups against this. And they don't want underbrush cleared. They don't want some trees cut down. They don't want big branches trimmed. But in the areas where that was done, not one home burned. Here in Running Springs, that process has not been put into place, and there have been hundreds of homes lost. And there are some people up here saying the reason why is because this forest clearing plan was not used."