The co-hosts of "The View" again discussed the Iranian British hostage situation on the March 29 edition. Rosie O’Donnell trusted the Iranians more than the British and Americans, and the discussion evolved into more Rosie rants against alleged Bush administration tyranny and for the first time on "The View," Rosie ranted on her September 11 conspiracy theories. Rosie’s rants were too much even for fringe liberal Joy Behar. Token non-liberal Elisabeth Hasselbeck was far more assertive than the previous day. In the teaser at the end of the first segment, Rosie and Joy made light of the upcoming discussion.

ROSIE O’DONNELL: Alright we’re going to take a break and come back and talk about the situation in Iran with the soldiers, the British soldiers who were in international waters. The British say they were in the right waters and the Iranians say no they were in our waters, and so it begins.

JOY BEHAR: Do you think people are now clicking us off because you promoed that?

O’DONNELL: Well, I don’t know, but we're going to talk about it and I'm sure it will make the news.

Rosie exclaimed what is certainly news to Iran, that the entire world is siding with Iran as opposed to Britain and the United States.

O’DONNELL: Here’s the problem with what you just said, "us," because it's now Britain and the United States pretty much against the rest of the world. How did this happen?

Rosie, always concerned about the humanity of terrorists, brought that up again.

O’DONNELL: It's just it’s very hard in America when anyone from the mid-east has been so demonized that no matter what, it's impossible for some people to believe that the Iranians in any way could ever do anything ethical in any capacity. They are not people. They have somehow been dehumanized to the point where they’re not people who they’re just the enemy, the terrorists.

With the aide of guest co-host Marcia Gay Harden, Rosie continued on that theme, but that was too much even for her ideological ally, Joy Behar.

MARCIA GAY HARDEN: That digresses from what the real issues are. You worded a war on terror, personally that is propaganda.

O’DONNELL: Right, because it makes people into evil and good.

BEHAR: This guy Amanidajaja (sic), whatever his name is. He is a bad guy, he is a very bad guy. He stated explicitly he wants to wipe Israel off the map. This guy is a bad guy.

O’DONNELL: I'm not saying he's a good guy and I want him over for breakfast. No I’m not. I’m saying that in America we are fed propaganda and if you want to know what's happening in the world go outside of the U.S. media because it's owned by four corporations one of them is this one. And you know what, go outside of the country to find out what's going on in our country because it's frightening. It’s frightening.

HASSELBECK: So you think we're being brainwashed as a whole country? I think not. I think it’s a media

O’DONNELL: Democracy is threatened in a way it hasn't been in 200 years and if America doesn't stand up we're in big trouble.

Rosie should do some research on U.S. history. She is apparently unaware of the Alien and Sedition Acts, President Abraham Lincoln suspending Habeas Corpus, the Red Scare immediately after World War I, and the internment of Japanese Americans during World War II.

Rosie for the first time mentioned her September 11 conspiracy theories on "The View." Note that she has "no idea" who attacked us on that tragic day.

HASSELBECK: Do you believe that the government had a 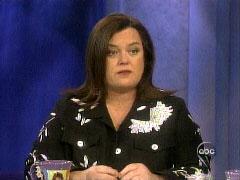 HASSELBECK: And who do you think is responsible for that?

O’DONNELL: I have no idea. But to say that we don't know it was imploded, that there was implosion in the demolition, is beyond ignorant. Look at the film. Get a physics expert here from Yale, from Harvard. Pick the school. It defies reason.