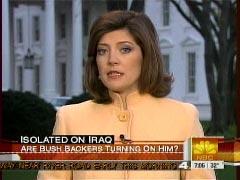 On Monday’s Today, NBC emphasized that Bush is still losing the War in Iraq, and is now losing key allies. Norah O’Donnell picked out sound bites from some of Bush’s allies so they would appear critical of the president and the war. O’Donnell added quotes from Senator John McCain, Henry Kissinger, Richard Perle, and Prime Minister Tony Blair. The entire transcript is below.

Meredith Vieira: "Harry Truman called the presidency the loneliest job in the world and President Bush might agree with him these days. Now it appears he's losing some of his key supporters over the war in Iraq. NBC's Norah O'Donnell is at the White House with more. Good morning, Norah."

Norah O’Donnell: "Good morning Meredith. And there is a fresh round of criticism from friends and insiders of the president on the war in Iraq. And this comes just as the 'Washington Post' is reporting today that the Pentagon's secret review of how to improve the war in Iraq outlines three options: One, send in more troops, two, shrink the force but stay longer, or three, pull out. Despite setbacks in Iraq, Mr. Bush insists victory is achievable."

O’Donnell: "But is the president increasingly isolated as his closest allies now publicly voice their criticism and doubts?"

Senator John McCain (R-AZ): "No, we are not winning in Iraq. That's why we have to have more troops there and we have to do it quickly."

Former Secretary of State Henry Kissinger: "I don't believe that is possible."

O’Donnell: "Neo-conservatives who promoted the Iraq war are also disenchanted."

Richard Perle: "I think the seminal mistake was standing up and occupation rather than turning Iraq over to Iraqis the moment Baghdad fell."

Unidentified Reporter: "It's been, you know, pretty much of a disaster."

Prime Minister Tony Blair: "It, it, it has been. You see, what I say to people is: Why is it difficult in Iraq? It's not difficult because of some accident in planning."

O’Donnell: "Mr. Blair's advisors are playing down the admission as a, quote, 'slip of the tongue.' But the prime minister has split with Mr. Bush calling on Syria and Iran to help in securing peace in the Middle East. Now the challenge for the president with two years left in office and a Democratic congress is to find a way to get things done."

Michael Beschloss, Presidential Historian: "Ronald Reagan lost the Senate in 1986 but went on from that to make peace with the Soviet Union and end the Cold War and give credit to some of his Democratic critics for helping him to do that."

O’Donnell: "Now, in just weeks the president is expected to receive that bipartisan report from the Iraq study group, and he hopes to have a new secretary of defense. Nominee Robert Gates is back up on Capitol Hill today meeting with Senators. Matt?"