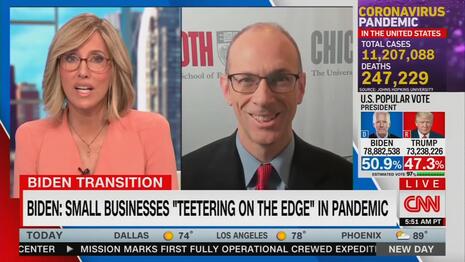 Rather than reporting the news, CNN’s New Day decided to spend its Tuesday morning broadcast mirroring Joe Biden’s words on the transition and COVID. Once again, they warned of dangers both to the lives of American citizens and to the economy if Trump does not start the transition.

As co-host Alisyn Camerota proclaimed to a pro-Biden guest: “We've had many segments already this morning about how this denial of the transition is perilous for national security. You say it's also perilous for economic security.”

The partisan network has been heavily calling on President Trump to concede the 2020 election, often resorting to insulting him. CNN has continued this trend by using talking points given to them by Joe Biden, mainly by drawing from his economic recovery speech given Monday afternoon, as well as other recent remarks.

Apparently, co-host John Berman had no problem being a stooge for the Democrats and pushing their anti-GOP rhetoric: “A lot of Republicans are now using the same kind of mealy-mouthed language saying it's likely Joe Biden will be President but refusing to outright say it and let this transition begin in earnest.”

CNN political commentator Errol Louis likewise ranted: “…relying on these mealy-mouthed Republican Senators to finally wake up and do what they're supposed to do according to their oaths of office, it's not going to happen.” Not exactly the unbiased reporting that an honest journalist would provide.

Since, apparently, CNN had not shown its loyalty to the Democratic Party enough, the hosts felt the need to show it off by pushing the same doom and gloom scenarios as Biden. Austan Goolsbee, who is an informal advisor to the Biden campaign, appeared later on the show to further scare viewers:

As the virus is raging out of control and the Vice President/President-elect's team cannot get in to start designing policies to control the virus, it's going to have a massively negative effect on the economy. If the virus rages out of control in the form that it looks like it's doing right now, we could easily have a double-dip recession, we could stop growing and have the problems we had in the spring.

Camerota showed no interest in challenging or questioning the narrative, instead, allowing her guest to spout DNC propaganda. Goolsbee described Trump’s current policies as “a recipe for thousands of additional people dying who don't have to. And that our economy will suffer a lot more than it needs to.”

CNN has made it beyond clear that it supports the Democratic Party agenda. It is not journalism but merely parroting whatever the DNC and Joe Biden say to the American people.

This CNN bias was sponsored by Shark Vacuums and Oral-B. Click on the links to let them know what you think.

A transcript of the November 17th Coverage is included below. Click "expand" to read more.

ROBERT O’BRIEN [White House National Security Advisor]: If the Biden/Harris ticket is determined to be the winner, you know, obviously things look that way now, we'll have a very professional transition from the National Security Council, there's no question about it.

JOHN BERMAN: That's an unforgivable moment of honesty from President Donald Trump's national security adviser, coming close to admitting that Joe Biden has actually won the election. Joe Biden is the President-Elect. A lot of Republicans are now using the same kind of mealy mouthed language saying it likely Joe Biden will be President but refusing to outright say it and let this transition begin in earnest. … David, you've got remarkable reporting we'll get to in just a minute. First, though, Errol, look, the Biden team is getting briefed today by national security experts who aren't part of the administration because the administration won't cooperation with the transition. It has come to this. At what point are Republicans do you think going to move beyond this mealy mouthed profiles in cowardice language and just say Joe Biden is the President-elect and deserves a real transition.

ERROL LOUIS [CNN Political Commentator]: Well, Republican leadership has made clear that day is never going to come, John. They are not going to do anything they are not forced to do or given permission to do by Donald Trump himself. The Biden team that’s been reported is thinking about making a popular mobilization strategy the way that they put pressure on the White House to do what they should are done days ago, if not weeks. The idea being that the general public can put pressure both on Republican leaders, good luck with that, but more directly on the White House itself to do what's in the public interest. But relying on these mealy mouthed Republican Senators to finally wake up and to what they're supposed to do according to their oaths of office, it's not going to happen.

JOE BIDEN: We're going in a very dark winter. Things are going to get much tougher before they get easier, that requiring sparing no effort to fight COVID so we can open our business safely, resume our lives and put this pandemic behind us. It's going to be difficult but it can be done. [Spliced Clip] Once we shut down the virus and deliver economic relief to workers and businesses, then we can start to build back better than before.

ALISYN CAMEROTA: That's President-Elect Biden giving his first economic address yesterday since winning the election. Joining us now is Austan Goolsbee. Former Chairman of the Council of Economic Advisers under President Obama. He was an informal adviser to the Biden campaign. Austan, great to see you this morning. We've had many segments already this morning about how this denial of the transition is perilous for national security. You say it's also perilous for economic security. How specifically is it?

AUSTAN GOOLSBEE [Informal Adviser to Biden Campaign]: Well, because the economy is so closely tied to controlling the virus. As the virus is raging out of control and the Vice President/President-elect's team cannot get in to start designing policies to control the virus, it's going to have a massively negative effect on the economy. If the virus rages out of control in the form that it looks like it's doing right now, we could easily have a double-dip recession, we could stop growing and have the problems we had in the spring.

ALISYN CAMEROTA: If this were a normal transition of the kind that you were involved in in 2008 between bush and Obama, what could President-Elect Biden be doing in the next 65 days?

GOOLSBEE: Well, it would be done in coordination with the administration that's there. But they could be trying to enact the policies for public health and for controlling the virus rather than ignoring the virus and kind of pretending that it's going to go away. Because if you have an infectious disease that's growing at an exponential rate, if you negligent it, and you don't coordinate the policy the way too his credit President Bush instructed his team during the financial crisis, you coordinate everything that we're doing with the incoming administration. If you do that you can hopefully get some control of the virus. If you don't, and it spirals out of control, it's more than thousands of people will lose their lives unnecessarily, it's that the economy is also going to take a deep downturn.

CAMEROTA: It doesn't look like the Trump White House is inclined to coordinate as you're describing. So what will this look like on day one of the Biden administration?

GOOLSBEE: Well, I mean, if they don't it's going to look like a mess. It's not too late. I hope that they come to their senses that what's best for the country is to get people not necessarily around a table, but get them on zoom or something so that we can coordinate this policy. The libertarian argument is a kind of a false argument for an infectious disease where it's everybody just be out on their own and try to take care of it yourself. That's a recipe for thousands of additional people dying who don't have to. And that are our economy will suffer a lot more than it needs to.

CAMEROTA: In terms of the economic stimulus, should Congress be doing something right now rather than waiting until January?

GOOLSBEE: I think they should as quickly as possible move on two fronts. One is money to help fight the spread of this virus because the economy is tied to that and the virus is the boss. Two, you've got large swaths of the economy that have not recovered, that are down because their customers are afraid of catching the virus so they're not going out to restaurants, to beauty salons, to cruise ships, whatever you want to say. You have to keep people from getting evicted and having their gas shutoff. So I think we're going to now go into a real pinch period and I think it's going to become obvious hopefully to all parties involved that where there needs to be some relief, it's not exactly stimulus of a traditional form of try to jump start the economy. This is literally just rescue and relief to prevent permanent damage from swamping us from this temporary shock.

CAMEROTA: Let's hope that something becomes obvious to both sides. Austan Goolsbee, thank you very much.