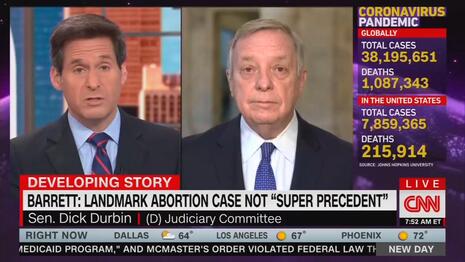 It was obvious from the get-go that Amy Coney Barrett is not what leftist CNN and the Democratic Party wanted from a Supreme Court Justice. On Wednesday, CNN’s New Day once again did not even attempt to be fair and gleefully attacked the nominee for her views on abortion.

Co-host John Berman asked Democrat Sen. Dick Durbin: “She made clear that she does not think that Roe v. Wade, or she cited scholarship specifically that does not think Roe v. Wade is a super precedent, in other words, like Brown v. County Board of Education [sic], something that can't be touched. What should voters, what should Americans take away from that? ”

The point was not to challenge the Senator or to present an opposing view. That would upset CNN's audience at home.

Another softball question asked was “You talked about some questions that she did not answer. Really at all. Some of them had to do about the peaceful transfer of power, about voter intimidation, about whether the President even has the ability to move the election date. She wouldn't answer that and I wonder what you think of that because I'm not so sure that's an issue of the so-called Ginsburg rule where a judge doesn't want to weigh in to a potential case, whether or not the President can move the election day is a simple matter of legal fact, isn't it?”

This was not about an honest discussion on the opinions of the nominee, but an attack. Often, nominees will refuse to give their opinion on that case or any other.

Rather than reporting on the facts of the case or challenging Durbin on his unsubstantiated opinions, Berman helped him along. A transcript from Tuesday’s hearing reveals what Barrett actually said about super-precedent. It’s for cases that “so well settled that no political actors and no people seriously push for their overruling.” She noted there were only six such cases.

It is to be expected that the Democratic Party would be upset about any nominee who refuses to please Planned Parenthood. Berman should have done his proper job and challenged the Senator on his viewpoints, not lead him along.

This CNN bias was sponsored by Liberty Mutual and Lincoln. Click on the links to let them know what you think.

A transcript of the October 14th Coverage is included below:

JOHN BERMAN: About an hour from now, questioning will resume for President Trump's nominee for the Supreme Court, Amy Coney Barrett. One topic raised several times during 11 hours of questioning so far, the future of abortion rights in the U.S. Judge Barrett declined to say whether Roe v. Wade set a precedent that should not be dismantled. Here is Senator Kamala Harris.

KAMALA HARRIS [D-CA]: I would suggest that we not pretend that we don't know how this nominee views a woman's right to choose to make her own health care decisions.

BERMAN: Joining me now is the Democratic Whip, Senator Dick Durbin, who also questioned Judge Barrett. Senator Durbin, thanks so much for being with us. There are a lot of people who look at these theaters as kabuki theater, but, in fact, there was a lot learned if you listened over the course of the 11 hours yesterday and one thing learned, I think, was Judge Barrett's position on abortion, at least from a jurisprudence perspective. She made clear that she does not think that Roe v. Wade, or she cited scholarship specifically that does not think Roe v. Wade is a super precedent, in other words, like Brown v. County Board of Education, something that can't be touched. What should voters, what should Americans take away from that?

DICK DURBIN [D-IL]: Well, I think it's very obvious. When she was asked about the three central points behind her nomination the question of the future of the Affordable Care Act, Roe v. Wade and whether she would be doing the President's bidding if there is an election contest, she basically made it clear that she wasn't going to make any commitments at all. That tells me sitting on the other side of the table that those are frankly up for grabs. Let's face it here, she is a personable, likeable, intelligent person who has done great things in her life. No question about that. But there is an Orange cloud over her nomination in the Trumps of Donald tweet. He has told America I'm not going to put anybody on the Supreme Court unless they're going to eliminate the Affordable Care Act which protects 23 million people, unless they're going to overturn Roe v. Wade and if they're going to be there I want them there for my election contest if it's necessary after November 3rd. Those are still the real realities of this nomination.

BERMAN: For all the talk about precedent, though, which she leaned on repeatedly and which we often hear in a Supreme Court confirmation hearing she made clear that Roe, the decisive case, dealing with abortion rates in this country is not the same type of precedent. So why is that important?

DURBIN: Well, it is important because super precedence like Brown v. Board of Education that said you have to integrate the public schools of America, she said over and over again there is no -- there is a consensus on this. Well, when it comes to the issue of abortion in her mind and in the mind of any observers, this is still a jury out controversy on the political level in America on the rights of health care for women, and that's what it comes down to. She believes that this is still in debate and she's made no commitment to suggest Roe v. Wade is a super precedent she would follow. You have to, I guess, anticipate that she would be a vote as the President promises that would overturn the protections for women's health care.

BERMAN: You talked about some questions that she did not answer. Really at all. Some of them had to do about the peaceful transfer of power, about voter intimidation, about whether the President even has the ability to move the election date. She wouldn't answer that and I wonder what you think of that because I'm not so sure that's an issue of the so-called Ginsburg rule where a judge doesn't want to weigh in to a potential case, whether or not the President can move the election day is a simple matter of legal fact, isn't it?

DURBIN: I don't understand it. She is a constitutional law professor. We have explicit language in the constitution about the peaceful transfer of power with dates and procedures spelled out in detail and yet when she was asked repeatedly as to whether she believed that the President's position is defensible or at least is willing to stand up for the constitutional provisions she said: I'll wait. I want to hear the arguments. I want to see what the testimony is. I want to know what the facts are before I will tell you whether there should be a peaceful transfer of power in the United States of America. I don't get it. I think the right answer was we have an established standard throughout our history that makes us a democracy, that we don't go into the streets after an election and that has to be honored. Anybody anyone who comes before me and wants to say that they can remain in the Presidency regardless of the electorate has got a burden that they will be unable to meet as far as I'm concerned.

BERMAN: One of the notable moments, memorable moments of the hearing was your questioning with Judge Barrett when you asked her about the death of George Floyd. I want to play some of that.

AMY CONEY BARRET: Senator, as you might imagine, given that I have two black children, that was very, very personal for my family. [Spliced Clip] My 17-year-old daughter Vivian who is adopted from Haiti, all of this was erupting, it was very difficult for her, we wept together. [Spliced Clip] For Vivian to understand that there would be a risk to her brother or the son she might have one day of that kind of brutality has been an ongoing conversation and it's a difficult one for us, like it is for Americans all over the country.

BERMAN: Why did you ask the question and what do you think of the answer?

DURBIN: Well, I think the answer was very real and very convincing and personal and I think it reflects what many families across America went through and the denial by some of the administration that we are dealing with systemic racism as a result of police going way beyond their rights and doing things that aren't acceptable is totally unacceptable as in the George Floyd instance, was the reason that she gave that answer and I thought it was a very credible answer. But the point I was getting to is she has a written decision which says a convicted felon can be denied a right to vote but cannot be denied a right to buy an ak-47. I think that's upside down and we know that the right to vote has been particularly a problem when it comes to minorities in America, suppressing the vote, we even see it now. One collection box in a county of 4.5 million people in Texas. Guess what's going on there, they're trying to suppress the vote. What I was trying to do was link up all of our concerns about racism in America with the reality of her written opinion which gives a standard for voting rights which I think is just not fair.