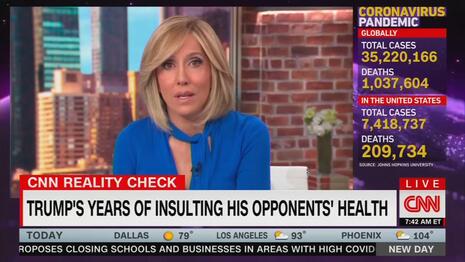 Over the weekend, NBC's Saturday Night Live showcased several skits that shamelessly praised President Trump's COVID-19 diagnosis and even hoped the virus would be his end. While this is disgusting, the left-wing comedy show is known for its anti-Trump hatred.

Meanwhile, CNN’s New Day is supposed to be a news program, but that did not stop it from having a shockingly similar message. Co-host Alisyn Camerota gleefully declared: “Sleepy, unsteady, senile, weak. That's some of Trump's favorite insults about the health of his opponents, but now he's the one who's sick.

Praising the downturn in the President’s health has become a common occurrence. On last Friday alone, there were numerous examples where the leftist media either subtly or otherwise praised the diagnosis and used it for political leverage.

CNN commentator John Avlon, who has made many harsh and unbacked claims about the President in his “Reality Check” segments, was the latest, calling it “a karmic twist.” This was in response to an account of times during the 2020 and 2016 presidential campaigns where Donald Trump made an issue out of his opponent’s health.

Instead, Avlon accused the President of spreading “disinformation” that has been created by the Russians.

Co-host John Berman, instead of reining in a commentator on his show, piled on: “I think, John, you just revealed why the President has been so squirrely about his health. Because obviously, he thinks it's weakness to be in the hospital. So he's trying to avoid it any way he can.”

Rather than accurately report the news, New Day shilled for Joe Biden in his reelection campaign.

This leftist attack was brought to you by Liberty Mutual and Sandals Hotels and Resorts. Click on the links to let them know what you think.

A transcript of the October 5 coverage is included below:

ALISYN CAMEROTA: Sleepy, unsteady, senile, weak. That's some of Trump's favorite insults about health of his opponents, but now he's the one who's sick. John avlon is here with a reality check. So now what, John.

JOHN AVLON: Ali, there's never been a President felled by a serious illness so close to an election. With Trump now saying, we should take this disease seriously, because after 210,000 American deaths, it has affected him personally. We all wish the President and everyone else White House covid outbreak a speedy recovery. But it's a karmic twist, because Trump has deployed the politics of sickness in this campaign and the last, trying to stir rumors that his democratic opponents were seriously ill. But just maybe this turn of events will allow our collective fever to break. So let's back up, take a look at what Donald Trump was doing almost four years to the day before his diagnosis.

AVLON: So he's making fun of Hillary Clinton for having pneumonia. And that wasn't all. His campaign released ads like this.

UNIDENTIFIED VOICE-OVER Hillary Clinton doesn't have the fortitude, strength, or stamina to lead in our world.

AVLON: It all injected rocket fuel into countless memes and Hillary health hashtags, often amplified by Russia. The muscle memory endures, because team Trump has been trying to run the same play against Joe Biden. 2020 nominees are less than four years apart, but Trump has been straining to raise questions about Biden's mental fitness in speeches, ads, social media, via surrogates, struggling to explain away strong performances to date that would reflect neither sleepiness or senility. After Biden’s DNC speech, Trump booster Rush Limbaugh said that Biden must have pre-taped it. Biden's CNN town hall talked about performance-enhancing drug use and around a disastrous debate in which Trump himself was possibly sick and likely contagious came conspiracy theory speculation that Biden was wearing an ear piece. Have we mentioned that projection is one of Trump's favorite political weapons. Because not coincidentally, we have also learned via Department of Homeland Security bulletin, that the Russians are spreading the same kind of disinformation via social media, the kind of stuff that Trump has even retweeted. But don’t get distracted from the fact that the literal politics of sickness affects all Americans through health care, and the Trump administration is preparing to argue in front of the Supreme Court that the Affordable Care act, aka Obamacare, is unconstitutional with nothing in place to replace it. We can do better. Witness the fact that the Biden campaign paused all negative ads out of respect for the President's condition. The Trump campaign, true to form, refused to do the same. Illness should inspire compassion. A recognition that we are all flawed and broken in different ways. But there's a common underlying condition underneath the politics of sickness and the politics of personal destruction. Both are symptoms of hyperpartisanship, which too often evaluates cruelty and justifies laws through a vision of politics as a version of civil war. We need to start overcoming this affliction, and address its root causes if we're going to see anything resembling real healing in the American body of politic. And that's your reality check.

JOHN BERMAN: I think, John, you just revealed why the President has been so squirrely about his health. Because obviously, he thinks it's weakness to be in the hospital. So he's trying to avoid it any way he can. But you judge for yourself whether or not you think that SUV photo stunt is a sign of strength or weakness.