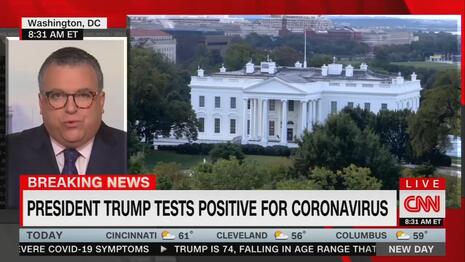 Nearly all of CNN’s New Day on Friday was devoted to the news that President Trump has tested positive for COVID-19. During this media frenzy, one narrative was constantly pushed, that the American people cannot trust the President. Co-host John Berman tried to defend the irresponsible rhetoric: “When you lie about the little things it's hard to trust you on the big things and that’s where we are this morning.”

This has not only been a common thread on CNN, it has been prevalent throughout the leftist media. During The View on ABC, they ran the exact same story challenging the credibility of the White House, especially regarding the pandemic. Neither show could provide evidence on why the American people should not trust the President.

“… this has been a constant conversation for nearly four years now, during the Trump presidency, which is when a President has such a deficit of trust with big swath of the American people, a majority of the American people in some polls that don't see him as honest and trustworthy when crisis hits what does that deficiency of trust mean for that moment? And let's talk specifically about how nontransparent, how opaque this administration has been about the President's health specifically.”

Another guest, political analyst and NYT reporter Astead Herndon, further sowed distrust about the information coming from the White House regarding the President’s condition. He questioned: “There is so much unanswered right now partly because we don't have the information and the white house has not been clear leading up to this process with the American people.”

At the time of the broadcast, the White House had released a memo detailing that the President remained well and he should still be able to discharge the office of the President. Nearly an hour earlier, the Vice-President revealed that he also had been tested and was negative for the virus. Considering the time frame, that is a good amount of information.

It is troubling that the liberal network is so quick to accuse White House officials of lying and say that the American people cannot trust the information released without any evidence.

This leftist accusation was brought to you by USAA and Sandals Hotels and Resorts. Click on the links to let them know what you think.

A transcript of the October 2 coverage is included below:

ERICA HILL: The breaking news this morning, the President and First Lady have tested positive for coronavirus and are in isolation at the White House. … we're learning so much as we go along this morning. It is only 8:30. It feels like it should be a lot later based on where we're at, at this point. But as we look at what 8:30 on Friday morning, October 2nd, looks like right now, versus what we thought it would look like right now, a lot has changed --

HILL: To say the least. One thing that hasn't changed though, there's genuine concern and there are real questions about what we are going to know about the President and the First Lady. How much credibility this White House has as we try to get answers on the President's condition and even the time line of events simply based on history.

CHALIAN: Erica, such an important point that you're making there. I mean, this has been a constant conversation for nearly four years now, during the Trump presidency, which is when a President has such a deficit of trust with big swath of the American people, a majority of the American people in some polls that don't see him as honest and trustworthy when crisis hits what does that deficiency of trust mean for that moment? And let's talk specifically about how nontransparent, how opaque this administration has been about the President's health specifically. And so on this issue alone, of just the President's health and, by the way, President Trump not the only President that has been opaque about his health in American history. But in this moment, this President who repeatedly lies to the American people, who very publicly dismissed the science related to this virus, constantly, and -- and who is known not to be forth coming about his own health with the American people it raises so many questions about what Americans tuning in to the news right now can actually take for truth in what comes out of the white house and right now obviously it's precious little. But when information does come out, how the voter -- how the American voter sifts through all of that is a tough task.

JOHN BERMAN: It is. Look, I have been pointing it out all morning, people are getting angry at me on Twitter for pointing it out. When you lie about the little things it's hard to trust you on the big things and that’s where we are this morning. That's why we have to question about what we're being told by the white house. We're in the middle of this campaign and it goes without saying that this does undercut part of the President's main message which is that most of the pandemic is behind us. It's clearly not behind us, clearly not for him at this point this morning. What do you see as the immediate impact on this campaign? What is going to happen to Joe Biden over the next few hours besides him being tested for coronavirus?

ASTEAD HERNDON [CNN Political Analyst]: I think there's the kind of immediate impact, that convergence of story line you're talking about. For the President they have tried to make the coronavirus a kind of side issue for the campaign. When you go to their rallies or events, not only are there no masks, not only is there violations of social distance, not only are the people packed in, but it's rarely mentioned. They fail to acknowledge what is the hugest story line in the past year and the biggest impact on voters' lives day to day this year. This has now brought that issue directly to the white house. I think on the logistic level, this means he cannot have those in person rallies that he has wanted to juice turn out. he'll be more sidelined in the white house and this also means that this administration cannot run from the issue any longer. For Joe Biden I think obviously initially there's going to be that coronavirus test. But this throws everything into question. Will Senator Kamala Harris and Vice President pence debate next week? I know he's gotten a negative test, so that looks differently now and what about the debate between Biden and Trump? Is that going to happen in person, on zoom? There is so much unanswered right now partly because we don't have the information and the white house has not been clear leading up to this process with the American people, with media and that's not something we can translate to voters and residents and say we have this kind of a trusted share of information. We don't know what's going to happen next.

HALL: Yeah. I was going to say too, the idea of a zoom Presidential debate could not be more 2020 although I feel like we keep saying that over and over again.

BERMAN: This isn't a joke that is going to go over well, you try to zoom with 70-year-olds, I’ve done it, it’s not easy.

Hall: We touched on this, Margaret, there are serious questions about how the work gets done and not just the campaign work, but the actual work that happens on a daily basis in the west wing. We don't know this morning. We're still waiting on those answers. We're not sure who can show up to work, we’re not sure who has to be in quarantine. That has a massive impact as well.

MARGARET TALEV: Yeah, Erica, I think that's right. When you say who has to be in quarantine we know what the CDC guidelines are for this. We know that if everybody was going to operate by the book, it would be days before people were congregating together, maybe a couple of weeks. I don't expect that to play out in this white house, given the timing so far. Look a President and a Vice President can continue to govern themselves, even if they are ill as long as they're not gravely ill. So we see the updated schedule that he intends to go forward with the call today on covid-19 and how it affects vulnerable seniors. Yes, that's completely ironic, but true. And that's what on his schedule and there are a number of other interactions as well. What about the final weeks with congress? There's obviously a crucial supreme court confirmation and will the Democrats and the Republicans feel the same about that? How will the President and Vice President make policy decisions? How will the staffs make decisions? I can see the President potentially -- if he has mild symptoms or symptoms that pass, I could see him wanting to get back on the campaign trail in those final weeks but will the crowds be as confident as they have been or will there be kind of a Tulsa effect? So I think there are a lot of substantive policy and political questions in the immediate hours we don't know the answers to, but they will surely have an impact as they refocus the attention back to this central issue that all Americans in every state are aware. Anyone can be vulnerable, even the President.