On Tuesday’s Morning Joe, co-host Mika Brzezinski went off on a number of governors who have vocally expressed their opposition to allowing Syrian refugees into their state without a proper vetting process, calling their views “hateful” and “stupid.”

The MSNBC host accused the governors, which include Democrat Maggie Hassan of New Hampshire, of “tapping into hatred” for daring to suggest that the federal government should press the pause button on allowing any new refugees into this country until we fully know who they are.

Joe Scarborough agreed and suggested that Democrat Maggie Hassan is only joining with the Republican governors because “[s]he's running for Senate. It's not that it's a coincidence that she's running against Kelly Ayotte.”

No one on the Morning Joe panel seemed to see the irony in lecturing Republican governors over not having the legal authority to ban refugees from entering their respective states given that President Obama has been accused multiple times of picking and choosing which federal laws he wants to enforce, such as federal drug laws or immigration law.

Instead, Brzezinski continued to rant against the governors for being “hateful” and “destructive to the process”:

You're being incredibly stupid and hateful and I think destructive to the process unless you think governors are irrelevant and senators and congressman who have gone on television all day yesterday saying no Syrians in my district. It’s disgusting. Come on, are you kidding me? Come on, it’s reprehensible.

Later in the broadcast, Mika had a heated confrontation with Congressman Peter King (R-N.Y) over the United States’ vetting process for refugees, which King stressed did not truly exist for those coming from Syria. Despite the Morning Joe panel’s repeated insistence that the U.S. has one of the strictest vetting processes in the world, King told Brzezinski “you're entirely wrong” because there is no true vetting occurring for those fleeing Syria:

We cannot vet the refugees from Syria. There are no databases to work against. There are no government records. And when I talk to people involved in the vetting, they have no confidence at all in the people that are being allowed in. There's in way -- when people talk about thorough vetting, there is no vetting as a practical matter. That is the reality.

MIKA BRZEZINSKI: Okay. That will be popping off. And that would be popping off. There's no legal authority to do it, number one. So they're just using this. And it's what, 10,000 Syrian families, women and children. It's just not who we are. And they're all Republican governors. Some from swing states, which is interesting. But --

JOE SCARBOROUGH: Are they all Republican governors?

BRZEZINSKI: I think they are.

MIKE BARNICLE: No, there’s one Democrat in New Hampshire.

BRZEZINSKI: There is one Democrat. There you go.

SCARBOROUGH: She's running for Senate. It's not that it's a coincidence that she's running against Kelly Ayotte.

BRZEZINSKI: Do we even need to talk about this?

SCARBOROUGH: We can if we want to.

SCARBOROUGH: You know what, the president of the United States actually has the ability to help us win a war against ISIS. These governors have no legal authority.

BRZEZINSKI: Are tapping into hatred. 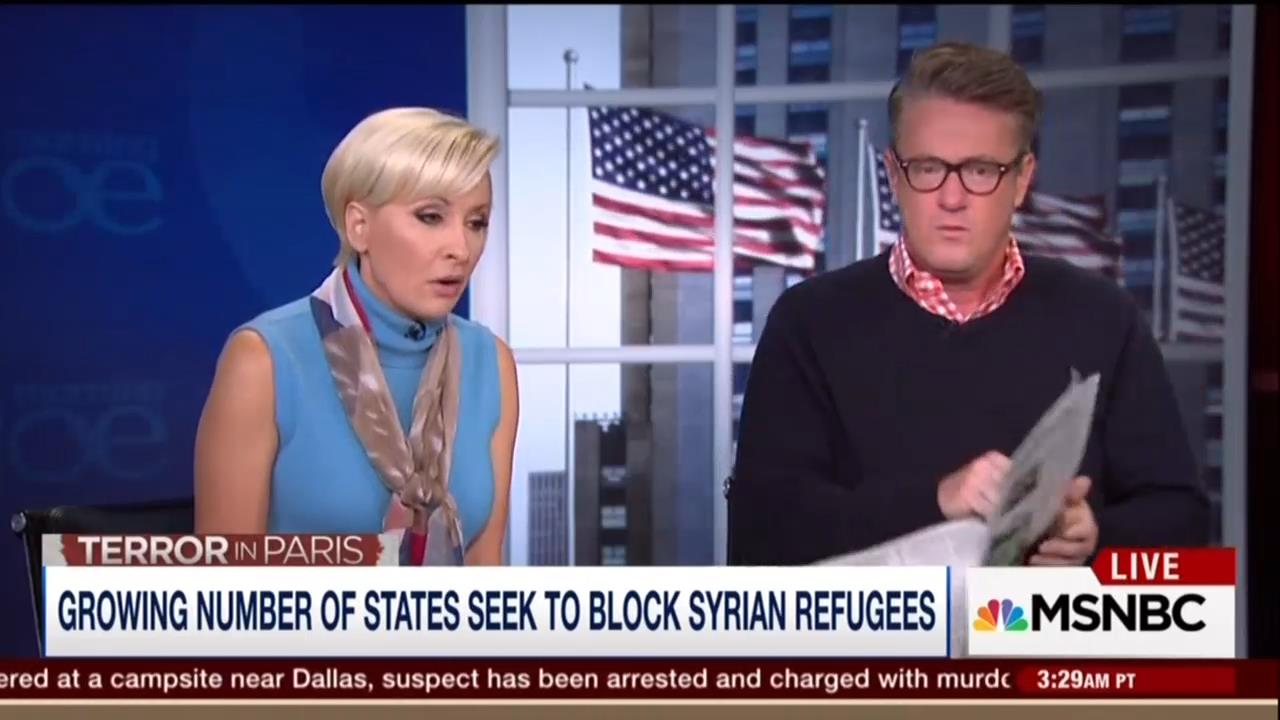 SCARBOROUGH: They have no legal authority to stop refugees from coming into the states.

BRZEZINSKI: Which is why they should shut up. I’m sorry.

SCARBOROUGH: Okay, but you're trying to put that at the same level with the president of the United States disconnected against a war against ISIS? No they’re just being stupid. And it’s irrelevant.

BRZEZINSKI: You're being incredibly stupid and hateful and I think destructive to the process unless you think governors are irrelevant and senators and congressman who have gone on television all day yesterday saying no Syrians in my district. It’s disgusting. Come on, are you kidding me? Come on, it’s reprehensible.

SCARBOROUGH: I agree. And let me say again, these governors have no authority.

BRZEZINSKI: And senators and congressman.

SCARBOROUGH: They can hold a press conference if they’d like.

BRZEZINSKI: I guess congressman don’t mean anything to you.

SCARBOROUGH: One time? Without being interrupted?

SCARBOROUGH: These governors have no authority to do this period. End of sentence.

WILLIE GEIST: Resettlement is a federal matter. And also when refugees come in there's no group of people who are screened more strictly than refugees in terms of the process they have to go through.

GEIST: It’s not like they just flood into the country.

BARNICLE: And again, they don't come in overnight. There's a vetting process that takes place.

SCARBOROUGH: That is the insanity of it as well. You look at what's happening in Europe and they're coming in trains, right? They're just flooding across the borders and the Europeans are overwhelmed. We have the toughest process in the -- one of the toughest processes in the world if you're going to come in and do this legally and the vetting is intense.

BRZEZINSKI: Well, some of these governors don't trust it.

SCARBOROUGH: Unless they want to get elected on the federal level --

BRZEZINSKI: Some of them are running for president so it is kind of important.