On Tuesday night, both the CBS and NBC evening newscasts did their best to play up Texas Governor Rick Perry’s appearance at an Austin courthouse following his indictment on corruption charges. The Texas Republican was indicted after vetoing funding for the state’s Public Integrity Unit after its leader, Travis County District Attorney Rosemary Lehmberg, refused to resign following her DWI arrest.

The CBS and NBC’s evening news anchors highlighted Perry being photographed for his mugshot with NBC’s Brian Williams proclaiming that Perry was “fingerprinted, had his mugshot taken. A humiliating experience for a once and potentially future presidential candidate.” [See video below.]

On the CBS Evening News, anchor Scott Pelley pushed a similar message and noted how “this evening, Texas Governor Rick Perry was fingerprinted, photographed, and booked on two felony charges of abusing power. This is the booking photo that we just got into the newsroom.”

Pelley then introduced Anna Werner who provided a fairly straightforward report surrounding the details of the case against Perry, including why the Republican vetoed funding for the state’s Public Integrity Unit.

Despite the mostly balanced coverage of Perry’s day in court, the CBS reporter ended her report by throwing cold water on the Texas Republican's future in politics by claiming that “even if he's not convicted, there's the question of what this could cost him politically if he it does intend to run for president again in 2016.”

After NBC’s Brian Williams insisted that Perry’s indictment was a “humiliating experience” the Nightly News anchor turned to reporter Janet Shamlian, who like CBS’s Anna Werner, provided mostly balanced coverage of the day’s proceedings. To her credit, Shamlian went even further than CBS’s Werner by spotlighting both Democrats and Republicans who stand with Perry against what they see as a politically motivated indictment:

The Perry defense has some unusual allies. Obama adviser David Axelrod tweeted “unless he was demonstrably trying to scrap the ethics unit for other than his stated reason, Perry indictment seems pretty sketchy.”

In similar fashion to CBS’s Anna Werner, NBC’s Shamlian felt the need to conclude her report by wondering “the question is whether voters are laughing, if Perry runs in 2016.” For its part, ABC’s World News with Diane Sawyer did not cover Governor Perry’s appearance at the Austin courthouse on its Tuesday night broadcast. 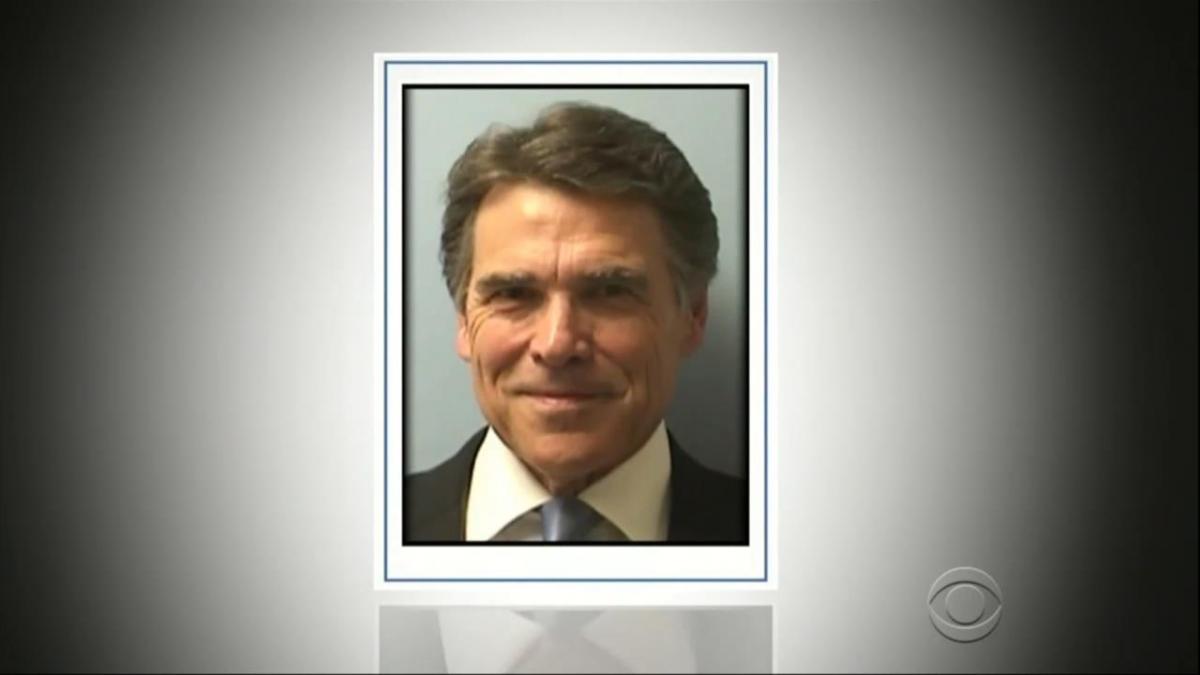 SCOTT PELLEY: This evening, Texas Governor Rick Perry was fingerprinted, photographed, and booked on two felony charges of abusing power. This is the booking photo that we just got into the newsroom. A grand jury indicted Perry last week, and Anna Werner is in Austin tonight. Anna?

ANNA WERNER: Well, Scott, supporters cheered Perry as he arrived here this afternoon. He told reporters that the charges against him were politically motivated.

RICK PERRY: I'm going to enter this courthouse with my head held high knowing the actions that I took were not only lawful and legal but right.

WERNER: The charges against Governor Perry stem from an incident in April of last year when Travis County District Attorney Rosemary Lehmberg, a Democrat, was pulled over for drunk driving. This is police videotape. Her blood alcohol level was more than three times the legal limit. She pleaded guilty, but Governor Perry wanted her to resign. He threatened to cut funding for her office, specifically the Public Integrity Unit which investigates political wrongdoing. Lehmberg refused to step down and Perry used his veto power to cut $7.5 million from her unit. Michael McCrum is the special prosecutor.

MICHAEL MCCRUM: I took into account the fact that we're talking about a governor of a state. Obviously, that carries a level of importance, but when it gets down to it, the law is the law, and the elements are the elements, and the analysis is whether or not the facts meet the elements of the offense.

WERNER: Perry has a team of lawyers working on his case, but, Scott, even if he's not convicted, there's the question of what this could cost him politically if he it does intend to run for president again in 2016.

PELLEY: Anna Werner in the Texas capitol. Anna thank you.

BRIAN WILLIAMS: Tonight the Republican Governor of Texas, Rick Perry turned himself in to authorities. He was fingerprinted, had his mugshot taken. A humiliating experience for a once and potentially future presidential candidate. It comes after he was indicted by a grand jury on a pair of felony charges for alleged abuse of power. Charges he and his team say are completely without merit. We get our report tonight from NBC’s Janet Shamlian in Austin.

JANET SHAMLIAN: As Texas Governor Rick Perry arrived to be booked on charges of abuse of power and coercion, he made it clear he sees the charges against him as a political vendetta.

RICK PERRY: I'm going to fight this injustice with every fiber of my being. And we will prevail.

SHAMLIAN: Perry has made no secret of wanting to run for president again. Visiting Iowa last week, and later this week, New Hampshire. Ditching his cowboy boots and putting on some serious glasses. The indictment stems from actions Perry took against a political adversary, the Democratic District Attorney of Travis County. A liberal bastion in a red state. Prosecutors say Perry threatened to withhold and then vetoed state funds from the DA’s ethics unit, which investigates public corruption.

But the DA, Rosemary Lehmberg, has her own problems. A DWI arrest last year, and an embarrassing video of her jailhouse behavior. Perry’s lawyers even played the video at a news conference. The Perry defense has some unusual allies. Obama adviser David Axelrod tweeted “unless he was demonstrably trying to scrap the ethics unit for other than his stated reason, Perry indictment seems pretty sketchy.” And former Perry opponent, Ron Paul.

RON PAUL: I don't generally defend our governor very much so I don't promote him, but this is pure politics. I tell you, this is really a joke.

SHAMLIAN The question is whether voters are laughing, if Perry runs in 2016. It was just a few moments ago, that the governor left the courthouse here after having that mugshot taken. He was surrounded by supporters and he was defiant, saying what he did was lawful, legal and proper. Brian?

WILLIAMS: Janet Shamlian where it all happened today in Austin Texas. Janet Thanks.