For the third time in the past year, NBC News has been caught selectively editing video for political gain, with the most recent instance coming on the Monday, January 28 Martin Bashir program.  Bashir ran heavily edited video showing Neil Helsin, whose 6-year-old son was killed in the Newtown shooting, appearing to be heckled by audience members during a legislative hearing on gun control. The chorus of criticism from media critics on the right and left forced MSNBC to backtrack, but not apologize.

Martin and many others who saw Mr. Heslin's testimony have called that interruption heckling. Some disagree. He wanted you to hear it in full so you can draw your own conclusion.  [See video after jump.  MP3 audio here.]

Had Mr. Bashir really wanted his audience to hear the complete video in full, wouldn't he have done so in the first place? And why was Bashir himself unavailable to face up to his poor judgment? Melber failed to state why he was filling in for Bashir? Was Bashir on assignment elsewhere? Did he call in sick? Suspended?

What's more, while Bashir and colleague Lawrence O'Donnell insist what happened was "heckling," there are plenty of other liberal journalists, like CNN's Anderson Cooper, who believe it is uncharitable and inaccurate to call the comments by the hearing attendees as heckling.

Sadly, Bashir was not the only MSNBCer to run the edited video, with colleagues Tamron Hall, Al Sharpton, and Lawrence O’Donnell doing the same.

MSNBC’s disgusting lack of journalistic standards have hit a new low, and their unwillingness to admit or take responsibility for their smear tactics need to be called out for what they are: pure gutter politics, aimed at demonizing law-abiding gun owners. 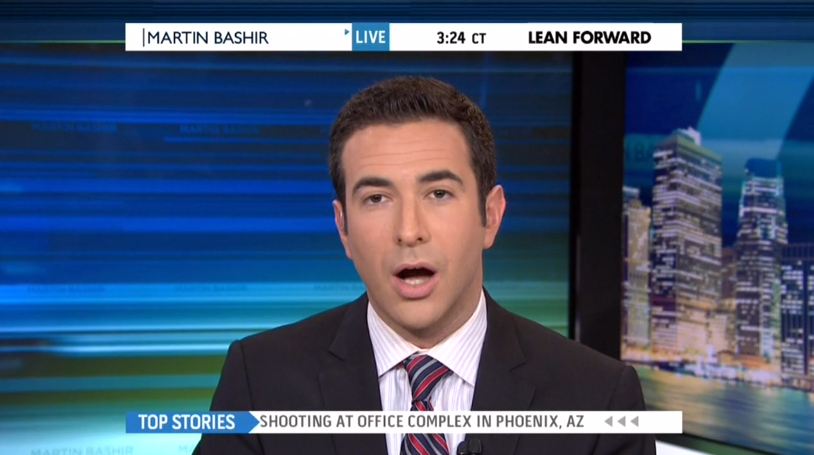 ARI MELBER: On Monday on our program, we aired a portion of a hearing where we heard from Neil Heslin whose 6-year-old son Jesse was killed at Sandy Hook Elementary School. We have received a number of comments over the past two days so we're going to play the relevant portion of that testimony in full…Martin and many others who saw Mr. Heslin's testimony have called that interruption heckling. Some disagree. He wanted you to hear it in full so you can draw your own conclusion.