On the February 7 edition of MSNBC's Now with Alex Wagner, panelist John Heilemann, who writes for New York Magazine, thought it appropriate to equate the gay marriage debate in California to racial bigotry experienced by African-Americans in the 1960s.

During an interview with openly gay former Lieutenant Dan Choi, Heilemann asked former Republican National Committee Chairman Michael Steele the following bigoted and offensive question: “Michael I’m curious about whether you think it would be okay in modern America, for there to be some states where black men could not marry white women?  If local standards where that were unacceptable.” [MP3 audio here. See video below.]

Regardless of one’s position on gay marriage, to equate the national debate on gay marriage to racial bigotry and discrimination is inappropriate and disgusting, especially when the question comes from a white journalist such as John Heilemann to a black conservative like Steele.  MSNBC didn’t even pretend to remain objective during the segment, which Wagner's producer entitled “Fighting for Equality.”

The segment immediately framed the debate by creating a victim out of Wagner's guest, demonstrating the blatant bias and pro-same-sex marriage agenda on MSNBC.  By turning to the only black panelist and suggesting that the objections to gay marriage are comparable to objections to interracial marriage is making a political issue into a supposed civil rights issue.  The New York Magazine reporter lost major credibility as an objective journalist by injecting race and civil rights into a political issue.

The issue at hand is not whether gay marriage is correct, but rather the way the gay marriage debate is framed.  Much like the recent debates over Susan G. Komen’s funding for Planned Parenthood as well as providing access to contraceptive for those affiliated with religious organizations, MSNBC has a clear politically-motivated agenda on these highly contentious issues.

MSNBC continues to demonstrate it is just an extension of the political left rather than a news organization that reports the news and gives viewers both sides of the story so that they can make judgments for themselves.

Below is the relevant transcript from Tuesday’s show: 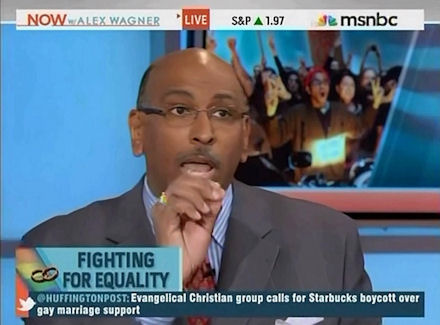 Jon Heilemann: Michael I’m curious about whether you think it would be okay in modern America, for there to be some states where black men could not marry white women?  If local standards where that were unacceptable.

Michael Steele: First off, lets just be very clear about a couple of things.

Steele: There are a significant number of African Americans, myself included, who do not appreciate that particular equation, because when you walk into a room I do not know if you are gay or not, but when I walk in a room, you know I'm black. And whatever racial feelings you have about African Americans, about black people, that is something that is visceral, it comes out. I don't know until later on, maybe you tell me or some other way, so don’t sit there and make that comparison. Don’t make that comparison because its not the same.

Heilemann: The analogy is perfect.

Steele: It’s not the same.  It’s not perfect.

Heilemann: There are human...legally speaking...

Steele: I don’t...I don’t...Respect the fact that I don’t think it’s perfect.  As an African American it’s not perfect.

Heilemann: Legally speaking there are, these are immutable characteristics.   There are, you can’t help whether you are white or wether you’re black or gay or whether you’re straight.  The notion that there, that you should be able to, because you can’t change these things, they’re not behaviors, they’re not clubs you belong to.  You can’t change who you love or you can’t change what cover you are.  Therefore, there should be equality around, on a national basis.  Whites should be able to marry blacks everywhere in the country because to have that be otherwise would be discriminatory.  Similarly, it’s the same story with same-sex marriage.  You have, you have...you can’t...


Steele: In your cultural view that may be acceptable.  In mine it's not.

Alex Wagner: And race in this country is certainly a very nuance question.

Steele: And race is a  very different category of discrimination.

Wagner: I think the fundamental, you know, question here, I mean were discussing it with Dan, who I want to bring you back in here, is the notion of, state by state versus federal, and I would also would say, in terms of this debate, where it’s going. Because on one hand, you have Prop 8 being evaluated in California.  On the other hand you have a bunch of folks who are running for the highest office in the land who have really impugned the notion of gay marriage.  You have Rick Santorum comparing it af ew years ago to bestiality, and there seems to be a massive gulf culturally in terms of where the right is on this and where the left is on this.