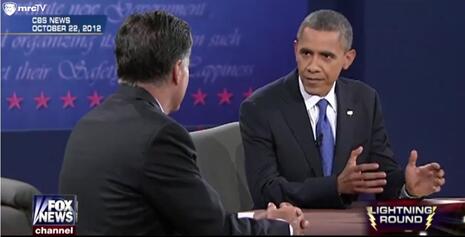 Over there in The Washington Free Beacon was an astute analysis by Drew Holden that reminds just how in the tank the liberal media is for all things Left.

In this case, Holden recalls the now infamous  2012 presidential debate between President Obama and GOP nominee Mitt Romney. Obama looked across the debate table at Romney and said this:

A few months ago when you were asked what’s the biggest geo-political threat facing America you said ‘Russia.’ Not Al Qaeda,you said Russia. And the 1980’s are now calling to ask for their foreign policy back.

In the day, CNN was clearly skeptical, discussing Romney’s view of Russia as if he were from Mars, complete with a chyron that read “Reality Check” on screen as they dissected Romney’s supposed mistake.

Leave it to then-Democratic Senator John Kerry to say that Romney “talks like he’s only seen Russia by watching Rocky IV.”

But what was telling, Holden points out, was the across the board reaction of the liberal media. Holden writes:

Several media outlets simply parroted the Obama campaign’s criticisms, with outlets including the Hill, the Daily Beast, and Salon amplifying the attack.

The New York Times editorial board went a step further, saying Romney’s comments displayed "either a shocking lack of knowledge about international affairs or just craven politics. Either way, they are reckless and unworthy of a major presidential contender." For the Times, Romney’s position wasn’t just wrong: It was unsayable.

Then there was a fact check from Glenn Kessler at The Washington Post. Kessler side-stepped whether the comment was "a Cold War throwback" and zeroed in on Romney’s specific allegation that Russia was "always" a roadblock for action against the world’s worst actors.

The conclusion? "Significant omissions and/or exaggerations." Kessler would add that "The Russians may be tough negotiators, but there’s nothing wrong with that.

Let’s go back to that reference to The New York Times editorial on Romney’s Russian point. The editorial says, among other things, this, with bold print for emphasis supplied:

Two decades after the end of the cold war, Mitt Romney still considers Russia to be America’s “No. 1 geopolitical foe.” His comments display either a shocking lack of knowledge about international affairs or just craven politics. Either way, they are reckless and unworthy of a major presidential contender.

Got that? The wisemen of the Times believed Romney displayed “either a shocking lack of knowledge about international affairs or just craven politics.”

As this is written, here’s the front page, all caps headline from The New York Times:

The Times story reported this:

Ukrainians on Friday braced for a violent battle for their capital, Kyiv, as officials warned residents to stay indoors and “prepare Molotov cocktails” to defend against advancing Russian forces who had entered a northern district of the city. Russia signaled that it was open to talks with the Ukrainian government, but it was unclear what the conditions were.

As missile strikes hammered Kyiv and a rocket crashed into a residential building, President Volodymyr Zelensky urged Ukrainians to defend the country, saying that no foreign troops were coming to their aid.

What is clearly at play here is that yet again the American Left is wildly naive about not simply Russia but the role of evil and the drive for power in the world. The subject could be Russia, China, Iran, the surging murder rate in Chicago or how to deal with the local neighborhood bully. What is perpetually on display, in this case in the liberal media’s rollover for Russia, is a willful naiveté about human nature. With no understanding of the quest for power, for control, dominance and sheer evil.

At the end of the day that is what not only Vladimir Putin is about, it is what every dictator in human history has been about. The problem for Americans is that their supposed elites in the world of liberal media have absolutely no understanding of this seriously basic fact at all.

Which, to say the least, as Americans are learning right this very minute, is seriously dangerous.