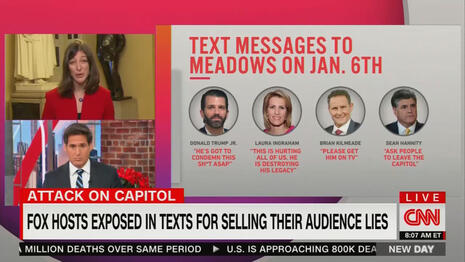 The other day in a new episode of the January 6 Committee sham, Speaker Nancy Pelosi’s handpicked Republican ally, Wyoming Congresswoman Liz Cheney, took it upon herself to violate the privacy of Fox hosts Sean Hannity, Laura Ingraham and Brian Kilmeade by reading aloud their private texts to Trump White House Chief of Staff Mark Meadows from January 6.

Safe to say – and unsurprisingly – all three were recommending President Trump speak out against the increasing evidence that the gathering of protestors at the Capitol was turning into a riot.

What seems not to occur to Cheney is that she is a member of the US government – and the idea of a government official targeting members of the press by reading their private communications is the stuff of Orwell.

Strangely, over there in the precincts of The New York Times (Frank Bruni) Cheney’s attack on media privacy and the free press rights of Hannity, Ingraham and Kilmeade simply doesn’t matter.

Here’s what Bruni had to say on the subject of media privacy: Nothing. Zero. Crickets.

Yet strangely, when a Westchester County, New York judge restrained The Times from publishing internal documents from James O’Keefe’s Project Veritas the paper’s leader was livid. The judge ordered The Times to “immediately sequester, protect, and refrain from further disseminating or publishing any of Plaintiff Project Veritas’ privileged materials.”

This ruling is unconstitutional and sets a dangerous precedent. When a court silences journalism, it fails its citizens and undermines their right to know. The Supreme Court made that clear in the Pentagon Papers case, a landmark ruling against prior restraint blocking the publication of newsworthy journalism. That principle clearly applies here. We are seeking an immediate review of this decision.

In other words? Freedom of the press and privacy for the Times, but not for Fox News hosts.

The bait and switch that Bruni apparently hopes no one notices is that instead of focusing on the privacy of Hannity, Ingraham and Kilmeade he focuses on the so-called “Big Lie” that centers around the results of the 2020 election. The headline on his piece was this:

The problem here is obvious. The results of the 2020 election are utterly irrelevant to the fact that the Fox hosts have a constitutional right to their free press rights. Those rights do not change no matter the subject under discussion. It could be the events of January 6th or Hunter Biden’s latest craziness or American policy towards China or who will win the Super Bowl or any of a limitless number of topics. The principle that there is a free press, with members of the media having the right to privacy in their communications with anyone – newsmaker or not – is  inviolate.

Make no mistake. The reason these three media hosts have seen their right to journalistic privacy tossed to the wind is because, but of course, the real target here is Donald Trump.

But there is a reason for principle. The principle of journalistic privacy applies regardless of the topic or the political needs of the moment. Unless, of course, you are a Fox host.

Question? Most knowledgeable political observers are predicting that the 2022 elections will bring a Republican majority. And if that turns out to be true, the tables will be turned. All those subpoenas directed by the Pelosi-run January 6 Committee at Republican House members, ex-Trump staffers and allies can easily be turned around and directed at Speaker Pelosi herself, not to mention her staff and the rest of the Democratic House leadership. The object: to find out why Pelosi failed to protect the physical security of the Capitol.

And if, by the by, the massive record of Pelosi’s communications - texts, phone records, e-mails - turns up messages from some liberal journalist, and that is released to the public by some Republican member of Congress?

Hell hath no fury like a lefty journalist with double standards.