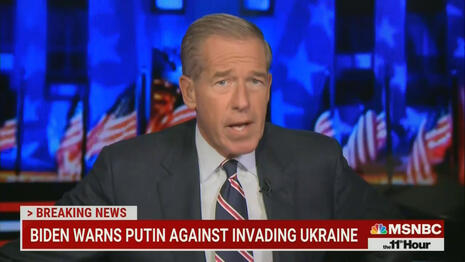 Included in the farewell was a smear of conservatives – after insisting he was, as Curtis notes, “not a liberal or a conservative,” but “an institutionalist” fearful of “the darkness...has spread” across America while equating Trump supporters to arsonists and murderers that frighten him as “an aging volunteer fireman.”

But earlier in the week, he was at the business of smearing the solidly conservative Newsmax Magazine with a blatant untruth.

The simplest amount of research – in this case reading an article in Newsmax Magazine before he talked about it – wasn’t done. Or just maybe it was done – and the idea was to deliberately misrepresent Newsmax to fit a phony left-wing narrative.

Newsmax host Eric Bolling led his own 4:00 pm Wednesday show, The Balance, with this vivid example of how the fake news operation at MSNBC works.

Eric Bolling: Well, it’s official folks. Newsmax is the victim of - wait for it - fake news. It’s the liberal strategy on full display. Find a headline that fits your narrative and run with it. Ignore the actual content. Ignore the words painstakingly written by reporters. Literally judging a book by its cover. And it went down last night on MSNBC in the 11th hour with Brian Williams. Take a listen.

Brian Williams: “But Putin is not without friends in the United States. This is the December issue of Newsmax Magazine -- “Vlad the Great.” Tweeted out tonight by Ron Filipkowski: ‘For anyone who thinks Newsmax is anything but Russian disinformation here is the cover of Newsmax Magazine’s December issue. Hundreds of thousands of MAGAs get their news from Putin everyday.’ Close quote.”

Bolling, who also displayed a copy of the magazine added this: “Now here’s the thing, Brian. Or should I say Lying Brian?”

Bolling recounted the infamous (and true) story, replete with video, of Brian Williams spouting his made- up-out-of-whole-cloth story of being in a helicopter covering the Iraq war when the helicopter was shot.

Not a word of the Williams tale was true, nor were, when NBC investigated, other tales. The network, discovering this, unceremoniously removed Williams from his anchor job at NBC, let time pass, then placed him in a much lesser role at MSNBC. As it happens, Williams has now left MSNBC.

Bolling then continued by opening the magazine to the”frigging first page” and a summary of the article that “tells a far different story.” He added that “no one at NBC wants to do the slightest amount of work.”

In fact, the summary says:

Russia may not have the muscle to challenge us directly. But that hasn’t stopped its leader, Vladimir Putin, from exploiting every opportunity to weaken America and its allies.

Clearly, the article is a take-down of Putin.

Bolling then points to the summary, saying “Right there. Open the from cover.”  The real point of the article, of course, was that Vladimir Putin, in the fashion of Russian dictators like Peter the Great, is a bad guy. And in today’s world Putin is out to harm America.

All Brian Williams and Ron Filipkowski had to do was - read the article. Too lazy to do that, they could have gone to the Newsmax website and followed this link to the magazine and read the description of the article. Here it is, with bold print for emphasis supplied:

Putin’s War on The West
The Russian leader exploits every opportunity to weaken the U.S. and its allies.

He’s evil, he’s cunning, and he’s the most powerful man in the world.

And now, the December issue of Newsmax Magazine takes you into the secretive, sordid, and sometimes frightening world of the man who’ll stop at nothing to get what he wants — Russian President Vladimir Putin.

In our explosive cover story, “Vlad the Great: Putin’s War on the West,” investigative reporter and bestselling author Kenneth R. Timmerman explores Putin’s beginnings and his goal of exploiting every opportunity to weaken the United States and its allies.

From his days as a cutthroat KGB spy stationed in East Germany to his power-hungry ascension to the presidency of Russia, Putin has given the U.S. and the world unending headaches with his nonstop amassing of nuclear weapons, incessant saber-rattling, and deadly espionage plots.

The iron-fisted tyrant kills his enemies without remorse, invades surrounding regions such as Crimea and Georgia, and works 24/7 to shut down America via sophisticated cyberattacks.

In addition, Putin has had an ongoing flirtation with China and Iran to form an axis to destroy the free world. ‘Putin has managed to expand Russia’s sphere of influence dramatically, while insulating the Russian economy from any serious impact from U.S. and international sanctions,’ Timmerman writes.”

The author of the article, Kenneth Timmerman, is a well known journalist who is easily described as a hawk on foreign policy. He was a Middle Eastern correspondent for the Atlanta Journal-Constitution, and while there was taken prisoner for 24 days by Lebanese Fatah guerrillas. To suggest that he is some kind of advocate for Vladimir Putin is absurd.

Newsmax, as the world outside of Brian and Filipkowski’s leftist narrative fantasy knows full well, is conservative -founded by the decidedly conservative Chris Ruddy and decidedly no friend of Putin’s. An article that calls Putin “evil” and “cunning” and that he is an “iron-fisted tyrant (who) kills his enemies without remorse” is hardly kissing up to Putin.

And newsflash? Calling Putin “Vlad the Great” is an obvious sardonic reference to another once-upon-a-time Russian dictator - Peter the Great, who ruled Russia with a Putin style iron fist between 1682 and 1725.

It is no secret that Russian dictators love Peter the Great. Allan Nevins, the famous Columbia University Professor of History, wrote a detailed article on the love for Peter the Great by another Russian dictator - Joseph Stalin. Writing for The New York Times in February of 1940, Nevins wrote this of Stalin and his idol: “Stalin, it is said, now has for the only picture in his Kremlin office a portrait of Peter the Great,” with the latter being “one of his (Stalin’s) sources of inspiration.”

Peter the Great was big on “general territorial expansion” - as was Stalin. At this very moment of 2021 Putin has, per news accounts, some 120,000 Russian troops poised on Ukraine’s border. It is patently obvious that Putin sees himself as a new Peter the Great.

Which, of course, was the obvious point in Newsmax calling Putin “Vlad the Great.”

The real point of this idiocy from “Lying Brian” and Ron Filipkowski is that contrary to facts, they are intent on pushing a left-wing narrative that the American conservative movement –  Newsmax in this instance – is an ally of Putin. Since they choose to ignore the facts of what the article in question says, they just make it up and peddle this nonsense to the gullible. And for a reason - to push a left-wing narrative that, like the Trump-Russia collusion hoax, is utterly false.

Fact: There could not be a more anti-Putin media organization than Newsmax.

Is an apology coming to Newsmax from Brian and Filipkowski for deliberately misrepresenting the truth to push their liberal narrative?