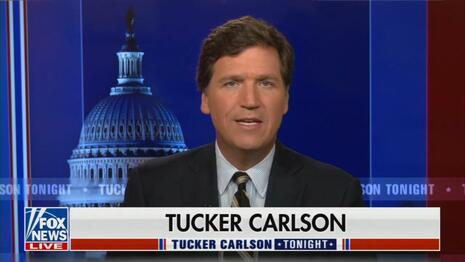 Fox’s Tucker Carlson has a new book out, The Long Slide: Thirty Years in American Journalism. The book is a collection of columns Tucker has written over the last thirty years. It’s a great ride through all manner of events and people.

Yet what instantly catches the eye is the book’s introduction —  in which Tucker writes a scathing take down of…his publisher. That would be Simon & Schuster.

His focus concerns the rise of censorship in America as practiced by Big Media, and he gives a short chapter and verse on the problem as it has appeared at S&S. After a review of a past that was once open-minded enough to have the liberal magazine The New Republic publishing his own pieces, he begins by zeroing in on the case of provocateur Milo Yiannopoulos.

In 2016, he writes, S&S signed a book deal with Yiannopoulos, then an editor at the conservative Breitbart News. Yiannopoulos had a “habit of questioning dominant cultural cliches” - which questioning an increasing number of journalists were finding “immoral.”

As with people like leftist entertainers Kathy Griffin and Sarah Silverman, Yiannopoulos was seen as “pushing boundaries.” The difference - the very big difference - was that Griffin and Silverman “made lame jokes designed to affirm the professional class’s sense of its own moral superiority.” They were lefties. Yiannopoulos, on the other hand not only “pushed real boundaries” he seriously trolled the left. Worse still, he attacked the left and is “flamboyantly gay.” As a result? “None of our taste makers congratulated him for it. Many of them became hysterical.”

Now here is where this gets interesting. Tucker notes that the Chicago Review of Books “denounced Simon & Schuster’s contract with Yiannopoulos as a ‘disgusting validation of hate,’ and announced that going forward, they would no longer review any book the company published.”

Next a leftwing activist with an S&S book deal pulled her own book from S&S to protest the Yiannopoulos book.

All of this, Tucker writes, “rattled Simon & Schuster.” Interestingly, “so many people pre-ordered copies of his book online that it became a bestseller before it was published.” To no avail. S&S canceled the book.

Working on a book at the time for S&S, Tucker asked S&S why Yiannopoulos had been canceled. Surely, he came to reason, there had to be something else at play behind the scenes other than sheer politics. He writes, this, clearly astonished:

“Could Simon & Schuster really have canceled such a promising book because the author’s political opponents had complained about it? That seemed impossible to me.”

For the next four years Tucker assumed there had to be something else at play in the S&S cancellation of an already best-selling-by-pre-order book by Milo Yiannopoulis. Then came the George Floyd killing.

As the nation erupted in flames in the summer of 2020, with race everywhere in the headlines, by coincidence a month later S&S hired a new publisher, an African-American woman named Dana Canedy. Canedy was ballyhooed by CNBC as “the first black publisher of a major imprint.” Similar praise appeared across the liberal media spectrum, with Canedy telling the New York Times her hire was symbolic of “an era of racial reckoning.” Fair enough.

Shortly after Canedy was aboard, the S&S imprint Threshold Editions “passed on a second book from the conservative author Candace Owens.” Owens first book, Blackout: How Black America Can Make Its Second Escape from the Democrat Plantation had been a New York Times bestseller. She is, of course, also an African-American woman.

But curiously, the Times ran a report that S&S planned to “stop publishing” Owens. Tucker was curious, and texted his editor at S&S to see if this was true. Why, he asked? Answer: “That’s between the author and the publisher. We’re not going to comment.”

Hmmm. First the provocative gay man Yiannopoulos, next the young black woman Candace Owens. Both bestselling authors canceled by S&S. It didn’t take long for another conservative to get the same treatment.

That would be Missouri’s Republican Senator Josh Hawley. Hawley had penned a book on the threat of Big Tech, and S&S editor Jonathan Karp loved it. “They are excellent. The writing is clear, commanding, and persuasive” he enthused. Hawley’s attack on Facebook in particular was  “a powerful critique.”

Then came January 6th and the attack on the Capitol. Hawley was quick to denounce it, immediately issuing this statement at 4:26 in the afternoon.

“Thank you to the brave law enforcement officials who have put their lives on the line. The violence must end, those who attacked the police and broke the law must be prosecuted, and Congress must get back to work and finish its job.”

Congress did just that. And Hawley, who had already announced his intention to vote against certifying the presidential election results from Pennsylvania, stood on the floor of the Senate and did as he said he would.

Tucker points out that this is hardly controversial as “Democrats in Congress had voted against certifying the vote in states after previous elections, including after the 2016 race. In 2005, 31 House Democrats voted against certifying George W. Bush’s victory.” And, in fact, eight Pennsylvania congressmen did the same as Hawley, with the GOP majority in the state legislature formally requesting in a letter that US Senators and Congressmen object to certifying the Pennsylvania returns. There was nothing either new or extraordinary about Hawley’s actions.

Except to Simon & Schuster. The very next day, January 7th, S&S cancelled his Big Tech book. Recall that S&S editor who told Tucker the reasons for the cancellation of the Candace Owens book were between “the author and publisher”? Not so with Senator Hawley.

S&S went out of its way to say they cancelled the Hawley Big Tech book because “we take seriously our larger public responsibility as citizens” and S&S executives “cannot support Senator Hawley after his role in what became a dangerous threat to our democracy and freedom.”

For a United States Senator to immediately rally to the Capitol Police under attack, to call for the attackers to be prosecuted and then stand up on the floor of the Senate and vote against certifying the Pennsylvania vote?  Joining numerous Pennsylvania House members and acknowledging the formal request from a majority of the Pennsylvania state legislature? Not to mention doing exactly what many congressional Democrats had done in 2016 and 2005? Now this was suddenly “a dangerous threat to our democracy and freedom?”

What this really was about, of course, is a much broader Big Media attack on conservatives in the media.

The silencing of Yiannopoulos, Owens and Hawley by Simon & Schuster is exactly of a piece of the efforts to bully Fox advertisers into withdrawing ads on the shows of Tucker himself, Sean Hannity and Laura Ingraham. Not to mention the similar attempts over the course of his career to silence the late Rush Limbaugh. And oh yes, not to be forgotten is You Tube pulling down Senator Rand Paul’s discussion of virus masks and removing a video of Republican US Congresswoman Nicole Malliotakis of New York expressing her opposition to Mayor Bill DeBlasio’s vaccination passports in New York City.

As if all this weren’t enough, Tucker writes that eventually he learned this:

“A group of nearly six hundred self-described ‘publishing professionals’ signed an open letter demanding that no person like Josh Hawley ever receive a book contract again. As they put it, ‘no one who incited, suborned, instigated, or otherwise supported the January 6, 2021, coup attempt should have their philosophies remunerated and disseminated through our beloved publishing houses.’

This ban the signatories wrote, must apply to all former Trump administration employees as well: ‘participation in the administration of Donald Trump must be considered a uniquely mitigating criterion for publishing houses when considering book deals…No participant in an administration that caged children, performed involuntary surgeries on captive women, and scoffed at science as millions were infected with a deadly virus should be enriched by the almost rote largesse of a big book deal.’”

Of course, Hawley had instantly, literally within a matter of minutes after the attack began, issued a statement condemning the attack, supported the Capitol Police and called for the prosecution of the rioters. The description of Hawley in that letter was, to be charitable, an utter falsehood. As Tucker writes, S&S canceled Hawley’s book because “a group of angry partisans demanded that Simon & Schuster do that. That was the only reason.’

Then there’s this. Two weeks after Joe Biden’s inauguration, Hunter Biden, the son of a president who was, to borrow from that letter of those 600 militant publishing types, had begun putting migrant children in cages and who himself is “the subject of an active criminal investigation by the Justice Department” and whom the FBI is investigating for his China business dealings? That Hunter Biden, announced the self-same Simon & Schuster, would have his memoir Beautiful Things published by…yes, Simon & Schuster.

There was no letter of protest from those militant “publishing professionals” either.

“What did shock me was the contrast between the way Simon & Schuster executives treated Hunter, and the way they treated Josh Hawley. The difference couldn’t have been starker. Jonathan Karp disliked Hawley’s opinions and his political party. He approved of Hunter’s. So under pressure from partisans, Simon & Schuster cancelled one and promoted the other. None of this was the result of any ethical consideration. It had little to do with book sales. It was political.”

All of this, as described with searing accuracy by Tucker Carlson in The Long Slide, is really all about the left’s “moral imperative” in “preventing Republicans from writing books.”

I would add that this censorship of conservatives and use of cancel culture reaches well beyond book publishing to conservatives posting videos to You Tube, tweets to Twitter, comments on Facebook, or hosting radio and television shows. Not to mention being present on common cable carriers, as Fox, Newsmax and One America News have been targeted by some House Democrats who tried to get all three removed from cable.

As the old Apollo 11 saying goes, “Houston, we have a problem.” Indeed we do.

Whether it’s Big Media like the Simon & Schuster publishing house, or once iconic papers like The New York Times and Washington Post, or television news outlets whether on cable (CNN, MSNBC) or broadcast like ABC, CBS and NBC - not to mention PBS - the move to silence conservatives by Big Media and Big Tech is real. Very real.

Not to mention dangerous.