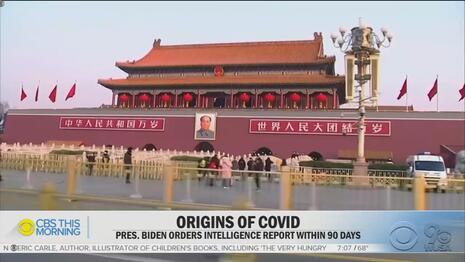 You’d think that after the Covington kids disaster and the Steele dossier calamity the American news media would get the message. Which is to say, report facts, not liberal narratives.

But of course, ain’t happening.

Over there at The Wall Street Journal, columnist Holman Jenkins had this to say on the latest self-inflicted media wound. His headline:

The news business is headed for trouble if it won’t control its biases as other professions do.

“On what basis was the lab leak theory ruled out for months by the media despite the lack of any evidence or logic for ruling it out? We’re bad journalists, has been the unembarrassed answer from the media this week in a wide array of print and online publications as well as National Public Radio.

We in the press dismissed the lab theory because of an appeal to authority: When anti- Donald Trump spokespeople ridiculed it, that was good enough for us. We dismissed it because of the equivocation fallacy: “Chinese” is a word that can be used to denote a racial category. Therefore it was racist to suggest a Chinese lab might have leaked the virus.

We engaged in availability bias: Instead of letting the evidence or lack thereof guide us, we adopted the attitudes of public figures whose political, cultural and social status we wished to emulate. Most insidiously, we relied on a fallacy sometimes known as ‘alleged certainty’: ‘The question remains open’ is not a headline that attracts clicks. A headline that does is ‘lab leak theory again proves Trump’s incompetence.’”

Mr. Jenkins gets it exactly.

Trump Derangement Syndrome is a disease that continues to amaze. Otherwise rational people —  journalists in this case - are so consumed with TDS that they quite voluntarily throw any semblance of standards over the side to guarantee their anti-Trump bona fides with their also-TDS infected liberal media colleagues.

The Covington kids were racist! Liberal media heads nod in unison, eventually brought to the realization - not coincidentally helped by lawsuits —  that there was zero truth to their carefully structured narrative of arrogant white kids tormenting an aging Native American.

This time around it was the origin of the Corona virus. It really isn’t rocket science to understand that the presence in Wuhan of the Wuhan Institute of Virology makes a leak from that lab one of the possible explanations for what happened. Leaks from laboratories have happened before and, in spite of all efforts, will doubtless happen again. Human beings are fallible. They make mistakes. It is nothing more than quite obvious common sense to count a lab leak as a possible source of the virus.

This jewel of liberal narrative propaganda actually said this:

“Sen. Tom Cotton (R-Ark.) repeated a fringe theory suggesting that the ongoing spread of a coronavirus is connected to research in the disease-ravaged epicenter of Wuhan, China.

…In response to Cotton’s remarks, as well as in previous interviews with The Washington Post, numerous experts dismissed the possibility the coronavirus may be man-made.”

Now —  this past week, over a year later —  here is the headline at a doubtless laughing Fox News:

“The Washington Post issued a correction 15 months after alleging Sen. Tom Cotton, R-Ark., was peddling a "debunked" "conspiracy theory" about the origins of the coronavirus pandemic.

Much of the media last year was quick to dismiss the possibility that the virus stemmed from a leak from the Wuhan Virology Lab in China, a theory that was promoted by top Republicans including Cotton and then-President Trump and then-Secretary of State Mike Pompeo.

Over the weekend, however, the Post revised the February 2020 report which had the headline, ‘Tom Cotton keeps repeating a coronavirus conspiracy theory that was already debunked.’

‘Earlier versions of this story and its headline inaccurately characterized comments by Sen. Tom Cotton (R-Ark.) regarding the origins of the coronavirus,’ the correction read at the top of the report. ‘The term 'debunked' and The Post’s use of ‘conspiracy theory’ have been removed because, then as now, there was no determination about the origins of the virus.”

Ouch. That’s a lot of egg to wipe off the Post’s face.

Over at The New York Times columnist Bret Stephens headlined the problem exactly:

Media Groupthink and the Lab-Leak Theory

“If it turns out that the Covid pandemic was caused by a leak from a lab in Wuhan, China, it will rank among the greatest scientific scandals in history: dangerous research, possibly involving ethically dubious techniques that make viruses more dangerous, carried out in a poorly safeguarded facility, thuggishly covered up by a regime more interested in propaganda than human life, catastrophic for the entire world.

I mean the long refusal by too many media gatekeepers (social as well as mainstream) to take the lab-leak theory seriously. The reasons for this — rank partisanship and credulous reporting — and the methods by which it was enforced — censorship and vilification — are reminders that sometimes the most destructive enemies of science can be those who claim to speak in its name.”

Whatever comes of the inquiry into the origin of the virus, the scandal about the liberal media’s coverage of that origin is real.

And as indicated with the coverage of the Covington kids and the Steele dossier, it isn’t the first time.

Nor, one suspects, will it be the last.