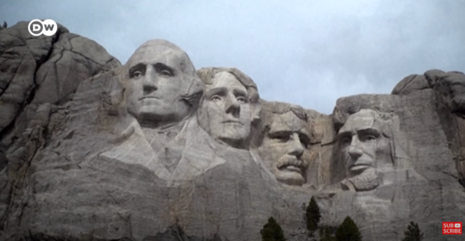 As NewsBusters’ own Tim Graham reported the other day, CNN reporter Leyla Santiago had this curious take on President Trump’s Mt. Rushmore visit.

The President, she told Jake Tapper, is "kicking off the Independence Day weekend, President Trump will be at Mt. Rushmore where he'll be standing in front of a monument of two slave owners and on land wrestled away from Native Americans….”

What makes this so curious? Here is a report from competitor Fox News:

“CNN began broadcasting this week from the network’s new facility in the Hudson Yards area on the West Side of Manhattan. The brand-new, state-of-the-art headquarters is part of a luxurious complex that also features condominiums which start at $4.3 million, high-end restaurants and stores such as Cartier, Rolex, Louis Vuitton and Neiman Marcus.” 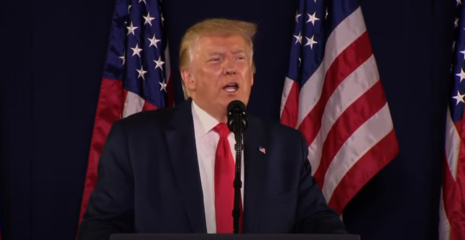 Hmmm. Notice anything? CNN is moving to its new offices located in “the Hudson Yards area on the West Side of Manhattan.” And yes, this is the very same Manhattan once owned by Indians. Indians who sold it to the Dutch West India Company for goods famously worth twenty-four dollars.

As CNN might say, Manhattan was “wrestled away from Native Americans.” Yet there is CNN itself leaving its old Manhattan headquarters - where it was located in the Time Warner complex that sits on…ya can’t make it up, Columbus Circle. And moving to another location - in, yes, the very same Manhattan.

One suspects it never occurred to CNN that they were headquartering on land “wrestled away” from Native Americans. Anymore than it occurs that Manhattan is part of the city and state named for the slave-trading Duke of York. As discussed in this space back on June 27th here is a thumbnail description of the Duke.

“The Duke of York, who later became King James II of England (and James VII of Scotland), created Britain’s greatest slave empire known as the Royal African Company, which transported between 90,000 and 100,000 African slaves to the Caribbean and American colonies between 1672 and 1689.”

Does the word “irony” have any meaning at CNN?

Then there was the media write-ups of the Trump Mt. Rushmore speech the night before the Fourth of July. The Wall Street Journal editorial board was understandably incredulous at these headlines:

Observed the WSJ editorial board:

“Divisive? Mr. Trump’s speech was certainly direct, in his typical style. But it was only divisive if you haven’t been paying attention to the divisions now being stoked on the political left across American institutions. Mr. Trump had the temerity to point out that the last few weeks have seen an explosion of “cancel culture—driving people from their jobs, shaming dissenters, and demanding total submission from anyone who disagrees.”

Describing this statement of fact as “divisive” proves his point. Newspaper editors are being fired over headlines and op-eds after millennial staff revolts.”

The WSJ’s Holman Jenkins was agog as well. His headline:

The Press on Mount Rushmore

When Donald Trump is gone and forgotten, the media’s lies won’t be so easy to forget.

“Every American, regardless of how he or she feels about Donald Trump, should read his July 3 speech at Mount Rushmore and then The Washington Post account of the speech by Robert Costa and Philip Rucker. The Post account begins: “President Trump’s unyielding push to preserve Confederate symbols and the legacy of white domination, crystallized by his harsh denunciation of the racial justice movement Friday night at Mount Rushmore . . .”

Except that Mr. Trump made no reference to the Confederacy or any of its symbols. His only reference to the Civil War was to Abraham Lincoln and the abolition of slavery as a fulfillment of the American Revolution.

Sen. Tammy Duckworth, as many commentators on the right noted, also lied when she said Mr. Trump ‘spent all his time talking about dead traitors.’He mentioned not a single leader or champion of the Confederacy.

…What we may really see in the Post’s disingenuous formulation is an attempt to appease its own newsroom, by some unnamed editor who cared less about putting a good and honest piece of writing in front of Post readers than about protecting himself from personal blowback. (I’m assuming it’s a “him”; such cowards usually are.)

Seemingly effortlessly, though, he has incited people and institutions that do have something to lose to wreck their own reputations: The FBI, CNN, our universities, etc.

Tens of millions of voters who plan to vote against Mr. Trump in the fall hardly need Post lies to give them more reason to do so. But millions of others will vote for Mr. Trump, or consider voting for him, exactly because the Washington Post lies about him.”

Suffice to say, a serious newspaper like the WSJ is not normally about labeling serious competitors of flat out lying. But this time around it was inescapable that this was exactly what the Post had done, with the others the paper cited in those headlines going out of their way to paint a portrait of the Trump speech that was just wildly wrong.

Taken together? Whether it was CNN’s oblivious reaction in describing Mt. Rushmore as being located on “on land wrestled away from Native Americans….” — while CNN itself has made a point of locating its New York bureau on land that could be similarly described (and in a city and state named for a world class slave trader)? Or whether it was the Washington Post lying - and being called out for lying by the WSJ —  one cannot imagine a more destructive way to, as Jenkins noted, “wreck their own reputations.”

For critics of the liberal media, the maxim attributed to Napoleon comes to mind:

“Never interrupt your enemy when he is making a mistake.”