Will the Hypocritical New York Times Change Its Name? 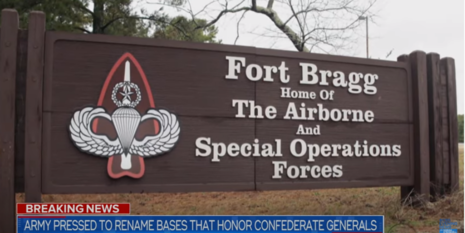 The irony is so thick it would take a chain saw to cut it.

Here is the headline from this New York Times editorial on May 23rd. "Why Does the U.S. Military Celebrate White Supremacy? It is time to rename bases for American heroes — not racist traitors."

The editorial - not an Op-Ed from a non-Times person but from the paper’s own Editorial Board - says this, bold print for emphasis supplied:

“This same toxic legacy (of white supremacy) clings to the 10 United States military installations across the South that were named for Confederate Army officers during the first half of the 20th century. Apologists often describe the names as a necessary gesture of reconciliation in the wake of the Civil War. In truth, the namings reflect a federal embrace of white supremacy that found its most poisonous expression in military installations where black servicemen were deliberately placed under the command of white Southerners — who were said to better “understand” Negroes — and confined to substandard housing, segregated transportation systems and even “colored only” seating in movie houses.”

…The federal government embraced pillars of the white supremacist movement when it named military bases in the South.

….Military installations that celebrate white supremacist traitors have loomed steadily larger in the civic landscape since the country began closing smaller bases and consolidating its forces on larger ones. Bases named for men who sought to destroy the Union in the name of racial injustice are an insult to the ideals servicemen and women are sworn to uphold — and an embarrassing artifact of the time when the military itself embraced anti-American values. It is long past time for those bases to be renamed.”

Got all that? Military bases named for racists have got to go. Their names must be changed.

Tell me again, what is the name of this newspaper? If you said The New York Times you would be blindingly correct. Now move over to this Daily Caller story from 2017 after the first statue-removing skirmish erupted in Charlottesville. The headline: "New York Is Named After A Horrendous Slave Trader."

The DC reported this of the man for whom “New York” was named:

“The Duke of York, who later became King James II of England (and James VII of Scotland), created Britain’s greatest slave empire known as the Royal African Company, which transported between 90,000 and 100,000 African slaves to the Caribbean and American colonies between 1672 and 1689.”

In other words, The New York Times - and everything bearing the name “New York” - from the state to the city to any and every institution (the New York Yankees!) in the state and city and anywhere else - is named after one of the most notorious slave traders in world history.

So, to use the language from that Times editorial headline? "Why Does The New York Times Celebrate White Supremacy?"

Using the standards of The Times? The naming of the paper for the slave-trading racist who was the Duke of York must surely reflect the newspaper’s embrace of white supremacy.

So the obvious. Will The New York Times —  demanding as they do that military bases named for white supremacists be re-named —  change its own name?

Perhaps it should just ‘fess up to the paper’s complicity in honoring a slave trader by renaming itself “The Slave Trader Times?”