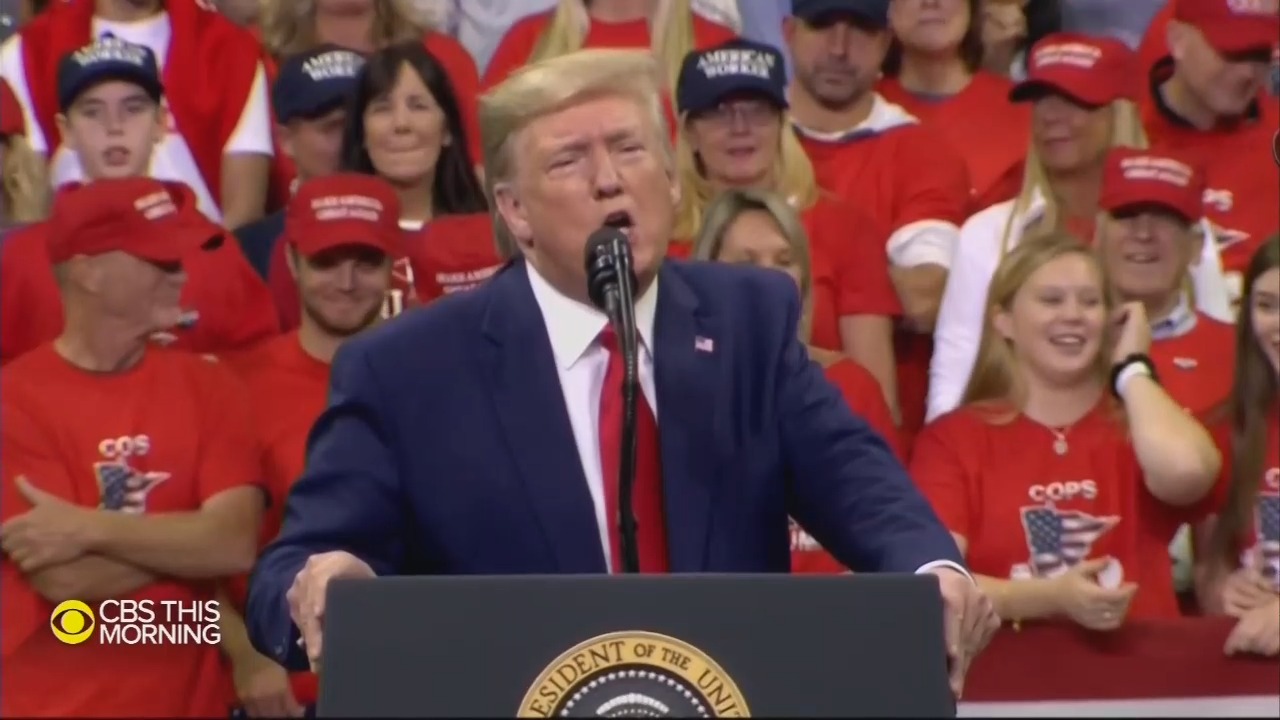 The day after the Trump rally in Minnesota, the tag line in The HuffPost’s “Morning Email” reads this way: “How Trump used the U.S. government to chase conspiracy theories; Plus, Trump’s vicious Thursday night rally.”

When one clicks on the link to the rally story one is taken to this article headlined: “Trump Rips Rep. Ilhan Omar As ‘Fraud’ And ‘Disgrace’ During Rally In Her District. President Donald Trump ranted against the Minnesota Democrat and vowed to prevent more Somalian refugees from entering the U.S.”

What follows in the HuffPost is an account of the “vicious” rally that curiously leaves out a key fact. This one.

Outside the event, as Fox correctly reported here, there was indeed some vicious behavior going on. But it wasn’t coming from either Trump or any of his supporters.

Here’s the headline from the quite factual Fox reporting: “Trump protest in Minneapolis erupts in pepper spray, MAGA hat fires.”

The report says what the HuffPost report blithely ignored, and I have supplied some bold print for emphasis:

“Hundreds of protesters outside President Trump’s rally in Minneapolis Thursday night set fire to Make America Great Again hats and other memorabilia in an effort to show their defiance to the current administration before police broke up the crowd, reports said.

There were reports that multiple protesters were arrested. One report indicated that protesters threw urine.

…A reporter for The Washington Post posted a video on Twitter that appeared to show a protester punch a Trump supporter in the back of the head as he left the rally. The crowd can be heard shouting “Nazi scum! Off our streets!” The video shows a Trump supporter being followed by protesters before someone calls out “There’s a Nazi over here,” prompting the attack.

The apparent Trump supporter was also slapped and pushed before eventually running to safety.

Police officers on horseback and bicycles formed a protective line in front of the arena, according to The Tribune. Officers with riot batons and shields also maneuvered through the crowd of protesters. The  Post captured video of one Hispanic family who wore pro-Trump clothing departing from the rally as one protester shouted ‘He hates you!’ The mother repeated ‘Mexicanos for Trump!’ as she left the scene.”

The Washington Post’s Jenna Johnson tweeted out this with the video, which Fox included in their report:

“A man in a blue jacket seemed to be leaving the Trump rally by himself when he was spotted by a protester who yelled: “There’s a Nazi over here!” A group of protesters then attacked the man, slapping and pushing him. He finally ran away.”

Johnson also tweeted out  this: “There was also briefly a chant of, ‘Kill a cop, save a life.’”

So inside the arena were thousands of quite peaceful, enthusiastic Americans at a political rally listening to the President of the United States. And outside the arena it was distinctly not Minnesota Nice. The protestors set fires in the street and threw urine. They punched, slapped and pushed a rally goer until he had to run to safety. It was so bad that the police were forced to bring out the pepper spray. All this among a “brief chant” of “Kill a cop. Save a life.” And oh yes, a Trump-supporting Hispanic family was targeted for verbal assault.

Vicious indeed. And not a word about it in The HuffPost.

Indeed, the HuffPost article made sure to focus on  Rep. Ilhan Omar’s response to Trump. The congresswoman, who has earned a reputation for blatant and repeated anti-Semitism,  tweeted out an attack calling the President xenophobic. Really. Aside from Omar’s utter lack of self-awareness in projecting onto Trump the behavior for which she is notorious?

There was no reminder from the HuffPost that this was the self-same Omar who notoriously has gone on the record with the oldest of anti-Jewish bromides (“It’s all about the Benjamins, baby”) and accused Israel of having “hypnotized the world” and committing “evil doings.” Trump read some of her worst quotes in his Minneapolis speech.

This is yet another example of the Leftist State Media’s addiction to the journalism of omission. If the facts are not helpful to the LSM’s agenda - then simply don’t report them. In this case, with violent anti-Trump protestors in the streets, the job at hand was to ignore them in favor of painting Trump —  yet again —  with the standard and ancient “Republicans are racist, sexist, homophobic, xenophobic” yada yada yada descriptives.

If this were merely a case of a far-left web site playing the usual games it wouldn’t merit any attention. But in an environment in which conservative speakers are banned on college campuses,  and the Democrat-controlled House is holding secret impeachment hearings, this small tag line from The HuffPost is every bit of an indicator as to just how the Leftist State Media will be covering the news from day to day.

And when they miss a beat and actually report all the facts? The New York Times did just that, allowing investigative journalist Peter Schweizer to publish this op-ed detailing just how Vice President Biden and son Hunter have played the influence pedaling game to enrich the Biden family.

The title: “What Hunter Biden Did Was Legal — And That’s the Problem. We need a Washington Corrupt Practices Act to stop political families from self-dealing.”

What happened as a result of The Times publishing this? Here’s the essence as reported over at The Daily Wire:

“On Wednesday, the Biden campaign sent a letter excoriating The New York Times for daring to provide coverage that is unfavorable to former vice president and 2020 Democratic presidential hopeful Joe Biden. The campaign also sent letters to enormous news disseminators Facebook and Twitter for allowing ads that highlight Biden’s shady dealings with Ukraine.”

As Sean Hannity mentioned on his radio show on Friday, the same demand to shut down that Trump campaign ad was made by the Biden campaign to Fox News. Fox refused.

So let’s be clear. The news media is not supposed to be in the business of reporting hard facts but rather, in the bible of the Leftist State Media, it must get into the business of censoring, manipulating and selectively presenting the news. Always with an eye to framing the news for the far-Left’s political purposes.

The 2020 election is as of today not quite twelve months away.