The Media, Greta Thunberg, and the Covington Kids 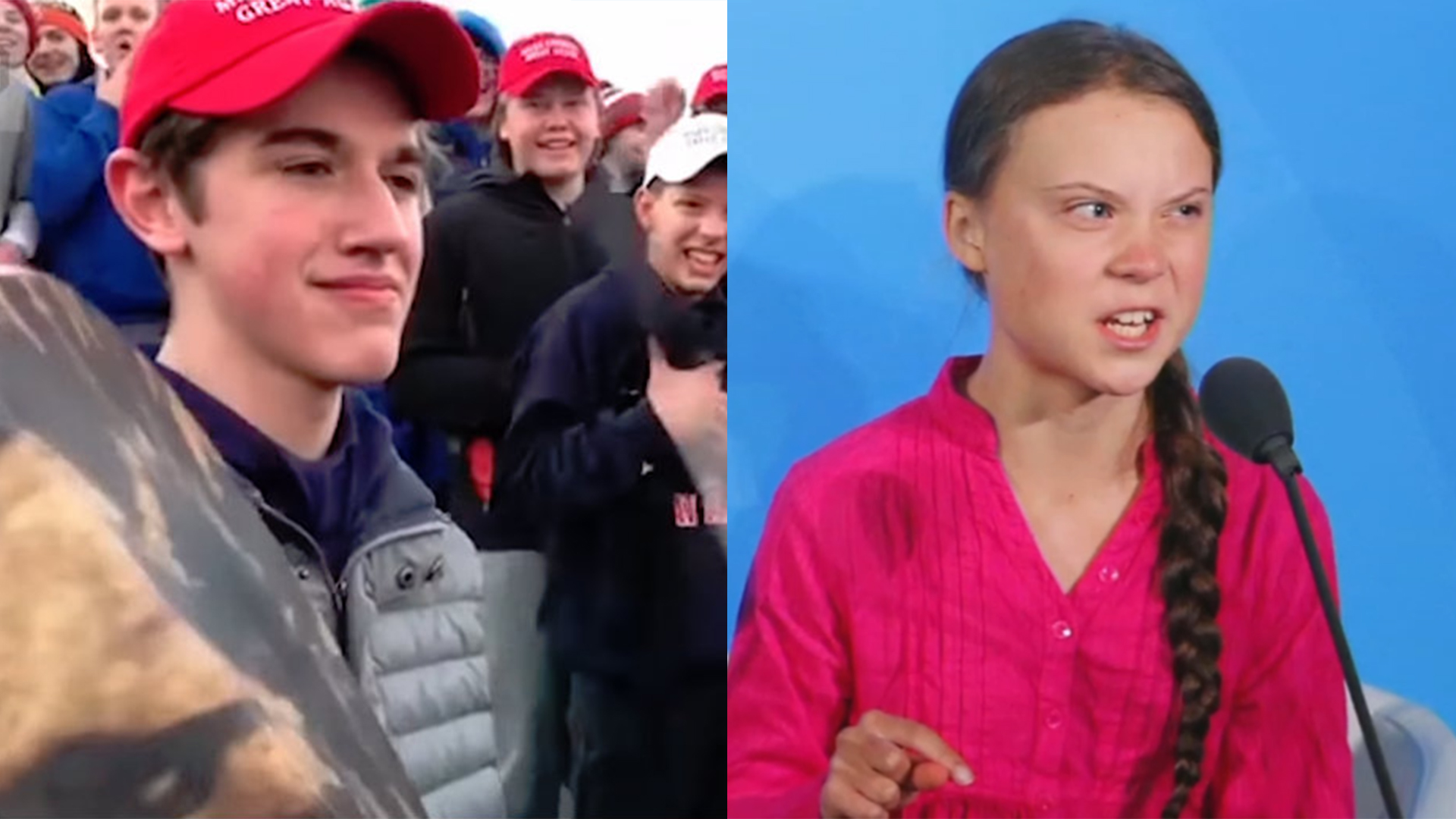 For a snapshot of just how the liberal media works, look no further than their treatment of Greta Thunberg and Nicholas Sandmann. Take a good look at the very different treatment of these two kids - and you can see the media coverage of the 2020 campaign unfolding in front of you before we even get to the fall election.

Here you have two teenagers, both of them 16. One is a Swedish girl, the other a boy from a Catholic school in Kentucky. One, Greta, seeks the spotlight and gets it as an advocate for climate change. The other, Nick, did not seek the spotlight but was thrust into it by virtue of attending the March for Life in Washington and waiting, with classmates and as instructed, on the steps of the Lincoln Memorial for the bus that would take he and his classmates home.

As is recalled still, out of the blue Nick was confronted by a left-wing Native American activist who caught sight of Nick’s “Make America Great Again” red hat. The older activist, as eventually was clear thanks to video, marched up in front of Nick and began pounding his drum. Politely, Nick Sandmann simply stood there and smiled at the man.

What followed with both Greta and Nick is what interests.

Greta was lionized in the media. Here are some sample headlines:

Vox: “Greta Thunberg became a climate activist not in spite of her autism, but because of it.”

The New Yorker: “Greta Thunberg’s Slow Boat to New York: A crowd of young eco-warriors and international media greeted the teen-age climate activist as she sailed into town on a carbon-neutral boat to attend a summit at the U.N.”

And Nick? For merely wearing a pro-Trump hat and smiling - after attending a pro-life march - Nick was savaged in the media.Here are some sample headlines:

ABC News: “Students from Covington Catholic High School, under fire over confrontation with Native American protesters, head back to class.”

On and on and on went the attacks on Nick Sandmann. Over at Fox News, Tod Starnes headlined: Covington Catholic High School students smeared by mainstream media lies -- Don't expect an apology.”

In fact, there were some apologies when it became clear from additional video footage that in fact Nick Sandmann had been completely innocent. Curiously, most of the apologies came from conservatives who themselves fell for the leftist media distortion of the facts and had jumped to the wrong conclusion based on the media’s initial video of the incident.

Nick Sandmann, on the other hand, was in fact on the other side of not one but three politically correct issues. One, he is white and was seen as being in a face-off with a Native American, an - older Native American at that - a distinct no-no. Second, he had been attending a pro-life march, putting himself in opposition to the only issue more sacred to the Left than climate change - abortion. And third - or maybe first - he had the audacity to wear that pro-Trump “Make America Great Again” red hat.

What the American people saw up close in the very different treatment of two sixteen-year old kids was exactly how the Leftist State Media goes about its business. Broaden the picture out from these two teenagers to the presentation of  the news of just this week alone-the uproar over President Trump’s call with the Ukrainian president, the so-called “whistle-blower” complaint and the call for impeachment - and one can see just how much the media is driving the debates in America. They have no intention - none - of being fair or balanced. Everything, every single news story, will be presented through the lens of the Left.

Is it any wonder that Gallup ran a poll on media credibility as the 2016 election careened to an end and headlined the results this way: “Americans' Trust in Mass Media Sinks to New Low.”

That particular poll, recall, was running at a time the media was confidently asserting Hillary Clinton was going to beat Donald Trump in a landslide.

As America heads into the 2020 election, the country is in for another weary round of Left-wing media propaganda . With Donald Trump  and his supporters getting the media’s Nick Sandmann treatment and whatever Democrat who emerges being cast by the media, along with his or her supporters, as an adult Greta Thunberg.