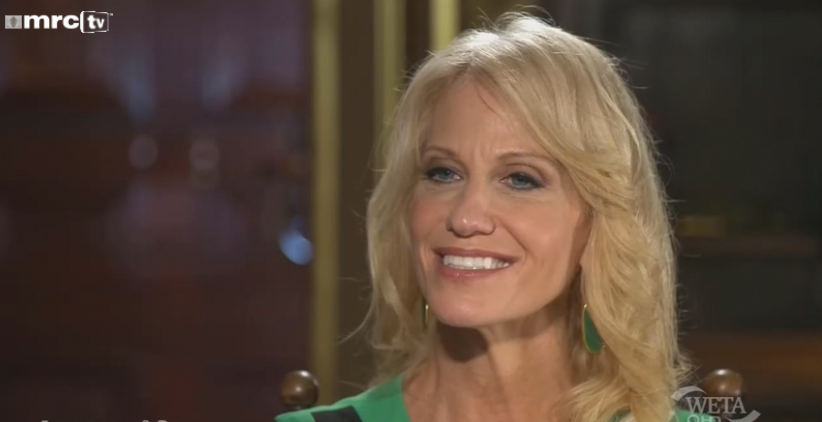 There they go again.

All three focused on a notice from the The Office of Special Counsel (no, not Robert Mueller) that tried to insist there was —  gasp! —  politics being practiced in the White House. The Counsel, named Henry Kerner, wrote a report that said, in part:

“Ms. Conway, in her official capacity, attempted to influence the Alabama special election by advocating for the success and failure of candidates in that race.”

“Walter Shaub, the former director of the Office of Government Ethics who is the senior director of the Campaign Legal Center, the non-partisan group which filed the OSC complaints against Conway, called on Trump to take disciplinary action against her.

“The White House cannot continue to have one standard for the federal workforce generally and a lower standard for appointees who are close to this President,” Shaub said in a statement.”

Now take a close look at that description by the AP. It says, bold print supplied, the “…Campaign Legal Center, the non-partisan group which filed the OSC complaints against Conway, called on Trump to take disciplinary action against her.”

Notice the clever deception? The “Campaign Legal Center” (CLC) is hardly a “non-partisan group.” It is a group of liberal activists who, among other things, had filed an amicus brief in the milestone Citizens United case, which struck down restrictions on unlimited political contributions.

Which is to say, the CLC  was trying to shut down the free speech of conservatives running a 2008 film titled Hillary: The Movie. Four years earlier they tried to shut down Swift Boat Veterans for Truth, the group of Vietnam-era Swift boat veterans that formed to oppose Democratic nominee John Kerry. In 2010 the CLC asked the IRS to investigate a group run by Karl Rove that was supporting GOP candidates.

None of this was mentioned in the AP story, nor, for that matter was any of this included in the reference to the CLC at CNN.

Over at Mediaite the headline was: “WATCH: Kellyanne Conway Melts Down When Busted for Lying About Violating Hatch Act, Lies Some More.”

The story revolves around Kellyanne’s back and forth with AP reporter Zeke Miller. And it repeats a flat-out untruth.

It is not, say again not, a violation of the Hatch Act to be in the White House and practice politics. Case in point?

In 1981, President Reagan’s White House Chief of Staff James Baker wanted longtime Reagan aide and conservative activist Lyn Nofziger to work in the White House. Baker accomplished his mission by creating the White House Office of Political Affairs and naming Lyn the boss with the title of Assistant to the President.

The White House political office has been there ever since. I myself worked in that very same office in the Reagan second term. It is 110 percent political, supporting and opposing candidates in the President’s name and promoting his policies.

In fact, it vanished momentarily in the Obama-era - and was later brought back by President Obama. The reappearance of the political office received the notice of the New York Times. The headline: “White House Comeback for Political Affairs Office.”

The story said the following:

“WASHINGTON — President Obama has decided to bring politics back into the White House.

Such considerations are at the center of everything that happens at 1600 Pennsylvania Avenue, of course. But three years ago, Mr. Obama closed the longstanding Office of Political Affairs at the White House and sent his operatives to his Chicago campaign office and the Democratic National Committee as he prepared for his re-election campaign.

Now the West Wing is reopening the office and promoting David Simas, a top communications aide, to be its new director. Mr. Simas, a strategist from Mr. Obama’s 2012 campaign, most recently served as one of the officials in charge of the rollout of the Affordable Care Act.

…In a statement, Mr. Obama praised the ‘talent and dedication’ of Mr. Simas and the others. Eric Schultz, a White House spokesman, said the new office would ‘coordinate the White House’s existing political strategy and outreach activities.’

…But with Mr. Obama in his second term and crucial midterm elections ahead, the White House seems eager to send a new message: that it is serious about defending Democratic control of the Senate and taking back the House from Republicans. White House officials said it makes more sense to have a political office during a congressional election year to focus attention on candidate needs, including fund-raising.”

In sum? The idea that the White House staff in any presidency is somehow “violating” the Hatch Act is ridiculous. The presidency itself is   a political institution - with all policy decisions always involving politics.

Kellyanne Conway is simply a target of left-wing groups because she is very good at politics - and she works for Donald Trump. What is ridiculous is that the media tries to play the game that something wrong and unusual is afoot in the Trump White House when it comes to practicing politics.

It isn’t so. History counts - and it might help if the media knew something about the history of politics in the White House. Not to mention it is way past time to stop describing liberal activists as “nonpartisan” when they are anything but.