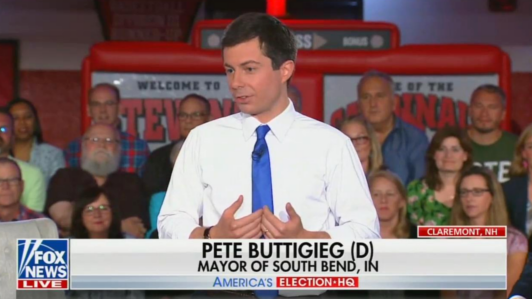 So over there at Mediaite is this curious story. The headline: “Pete Buttigieg Asked if Trump is a Racist: ‘If You Do Racist Things, And Say Racist Things…’”

The South Bend, Indiana Mayor and presidential candidate had a sit down with The Washington Post. And this question was asked of the mayor: “Is President Trump racist?”

To which Buttigieg replied this way:

“If you do racist things, and say racist things, the question of whether that makes you a racist is almost academic. The problem with the president is that he does and says racist things and gives cover to other racists.”

What did The Washington Post reporter not bring up to Mayor Buttigieg in response to that answer? After all, “If you do racist things, and say racist things”, according to the mayor, well —  it’s almost academic to note that you are a racist.

Strangely unmentioned was this story from last month in another Post, The New York Post. The headline: “Pete Buttigieg, Al Sharpton talk politics during lunch in Harlem.”

Not only did Buttigieg dine with Sharpton, saying afterwards how much he “valued the conversation” but he also went out of his way to speak at Sharpton’s National Action Network conference.

Now recall that this would be the very same Al Sharpton who:

— Was once captured on audio tape spewing the “n word” about then-New York Mayor David Dinkins.
— Was also captured on audio tape going on and on about “Chinamen”, Koreans and watermelons.
— Was also on tape saying: “We taught philosophy and astrology [sic] and mathematics before Socrates and them Greek homos ever got around to it.”
— In the middle of a Harlem racial incident inflamed the crowd by attacking a “white interloper.”
— In another controversy involving a New York City College radical professor who was at the center of a dispute over castigating “rich Jews” for the slave trade, Sharpton was quoted as saying: “If the Jews want to get it on, tell them to pin their yarmulkes back and come over to my house.”

Can you imagine if Donald Trump had any of this?

Then there’s this one, which certainly should have given the openly gay Mayor some pause. Appearing on a live television show with host Morton Downey, Jr. an enraged Sharpton shrieks at a hostile audience member that he is a “punk faggot.”

Yet with all of this blatant racism and anti-Semitism from Sharpton long, long on the public record —  The Washington Post is asking the Mayor if the President is a racist, completely ignoring that recent New York Post story that literally pictures the Mayor dining pleasantly with a man who is notorious for it.

There was not a peep about Buttigieg not only dining with Sharpton, but going out of his way to speak at his conference.

Not to put too fine a point on this but The Washington Post’s interview with the Mayor was a classic example of creating fake news by playing the game of omission —  letting a liberal presidential candidate wax on about Trump’s supposed racism with absolutely no acknowledgment that the candidate himself has just recently gone out of his way to court Sharpton, a man with a an absolutely notorious - and lengthy — documented record of disturbingly vivid racism and anti-Semitism.

As we move on to the 2020 election this is exactly the kind of game Americans have to watch for when they tune in to or read a mainstream media outlet.