Fox, the NRA, and Liberal Repression of Dissent 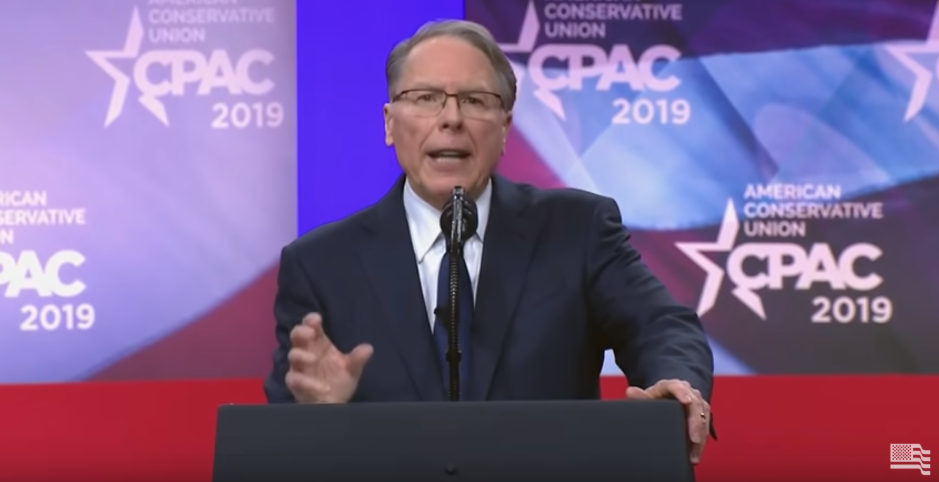 The other day, somewhat lost in all the coverage of President Trump at CPAC, there was a very concerning CPAC talk by Wayne LaPierre. Wayne is, of course, the longtime head of the National Rifle Association. And what he had to say was as enlightening as it was concerning.

His focus was on the fundamental freedoms at the heart of the founding of America. He said, in part:

He went on to discuss the debates of past years, describing his debates with opponents as spirited but respectful of the principles of freedom. It is an era, he made plain, that is alarmingly increasingly gone. He went on:

Today, our adversaries, seek not only to challenge our opinions - but our very right to express them. Rather than complete in the marketplace of ideas, they want to rig the competition. Foreclose it. They want to shut it down altogether.

Specifically, by way of an example, he pointed to New York Governor Andrew Cuomo as someone who “hates the NRA.” Cuomo “hates the freedoms for which we stand” and isn’t shy in saying so. He cited the Governor’s stated view that if you are an NRA member you have “no place in his state.”

Here is the alarming part. Since Cuomo cannot legally ban the NRA - a violation of the Constitution —  he has set about a covert campaign to accomplish the same end. How?

“…By using his power over Wall Street to starve the National Rifle Association of funds…..At the Governor’s direction, New York’s banking regulator sent letters to the CEO of every bank and every insurance company doing business in the state of New York. The letters urged those institutions to blacklist Second Amendment groups, especially the National Rifle Association. To deny us bank accounts, to block NRA members from purchasing affinity insurance - including health insurance for their families. To prevent us from purchasing ads on the airwaves, and to suffocate Second Amendment speech by choking off the funds that make free speech possible.That’s Governor Cuomo’s goal.

To achieve it, the Governor didn’t just threaten companies.He went out and acted. New York started to punish companies that did business with the National Rifle Association. The State imposed multi-million dollar penalties, and forced several of our business partners to abandon us.”

After repeating that for emphasis, Wayne made the all-too-obvious point: “Just imagine if the governor of a red state did the exact same thing to Planned Parenthood.” 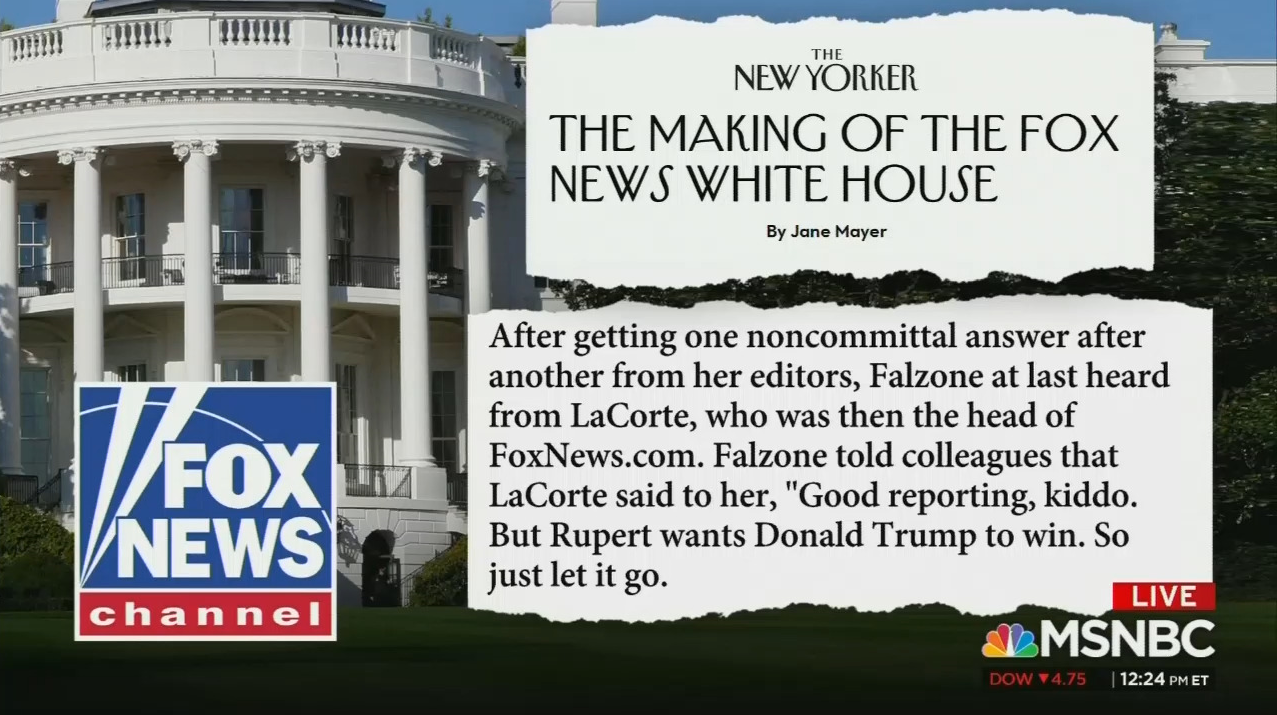 Now, let’s pause and move over to the subject of the recent decision by the Democratic National Committee to refuse to let Fox News moderate a Democratic presidential debate during the 2020 primary season. And as well, focus on the recent hit piece in the New Yorker by Jane Mayer, she a longtime liberal. The Mayer piece, published in an arm of the Liberal State Media, that vast complex of cable and broadcast networks, print outlets, and the internet, was titled:

The Making of the Fox News White House
Fox News has always been partisan. But has it become propaganda?

The essence of the Mayer piece was merely the latest version of the Left’s eternal complaint about Fox News - but with a new twist. Aside from the usual whine about the network being conservative, the newest complaint is that the network is really “Trump TV”, with the President tight as a tic with everybody from owner and founder Rupert Murdoch to Sean Hannity etc etc.

Well aside from the fact that Mayer completely ignored the close ties between various liberal media types with the Obama and Clinton administrations - recall that the tight relationship between then-CNN President Rick Kaplan and the Clintons gave birth to the derisive nickname of CNN as the “Clinton News Network - the real problem here is the unsubtle subtext. Which is: somebody needs to silence Fox News.

And….presto. Within days of that article’s appearance, the DNC announced it will not allow Fox News to host any DNC debate. The decision quickly praised over at…CNN.

What America is seeing here is something that Fox’s Tucker Carlson touched on the other night, and was reported on here at NewsBusters by Nicholas Fondacaro. The headline: “Tucker, Concha Blast CNN for Cheering on DNC’s Fox News Ban from Hosting Debates.”

Fondacaro cited this from Tucker Carlson:

“We (at Fox News) defend speech, even when it's unpopular, even when the person speaking has attacked us personally. Free expression is bigger than any one person or any organization. It is the very heart of this country, it's the foundation of all other freedoms. We really believe that.”

Tie what Wayne LaPierre said at CPAC to what Tucker Carlson was pointing out this week and one comes to exactly the conclusion that, as Tucker’s segment was titled, the American Left is now really all about a “Crackdown on Dissent,” with a chyron subtitling “Left Wants to End All Discussion & Debate.” He noted, also correctly, that when CNN personnel are cheering on the DNC the real message is that “disagreement shouldn’t be allowed.”

The Left embraces this view (of silencing dissent) because it increases their power. They don’t want debate. They consider compromise immoral - they say that.They demand total obedience. Around the world the Left is working to crush dissent, as CNN applauds from the sidelines.

Now. Let’s go back to where we started, with that CPAC speech of Wayne LaPierre’s.  What LaPierre is describing — with Governor Andrew Cuomo’s use of state power to silence the NRA — is precisely what Carlson is describing in the refusal of the DNC to let Fox host a debate.  It is part and parcel of an increasingly global effort to silence dissent and free speech. It is deadly serious. (And full disclosure, Carlson also cited my firing by CNN as part of this ominous silencing business.)

While at CPAC I had the privilege of meeting Hayden Williams. Readers will recall Hayden as the young conservative who was manning a table at UC Berkley in support of the conservative group Turning Point USA. Out of the blue, as seen in a video gone viral, Hayden is approached and abruptly punched in the face. The video of the incident is sickening, as the sound of the punch is clearly heard. (Here is Williams discussing the incident with Laura Ingraham and his attorney, Harmeet Dhillon —  along with the video of the incident.)

Without question, all of this is part of the same very big elephant in the room. It could be Andrew Cuomo threatening banks and insurance companies not to do business with the NRA in the State of New York. It could be trying to silence Fox News by refusing to allow them the quite normal and free press activity of hosting a debate. Or, quite graphically, it can be about punching Hayden Williams in the face.

The goal in every case is to silence dissent. Conservative dissent quite specifically.

And the Liberal State Media is cheering on this very dangerous business.

Not good. Not good at all.