The Media’s Walls: Okay for Them; Not for You 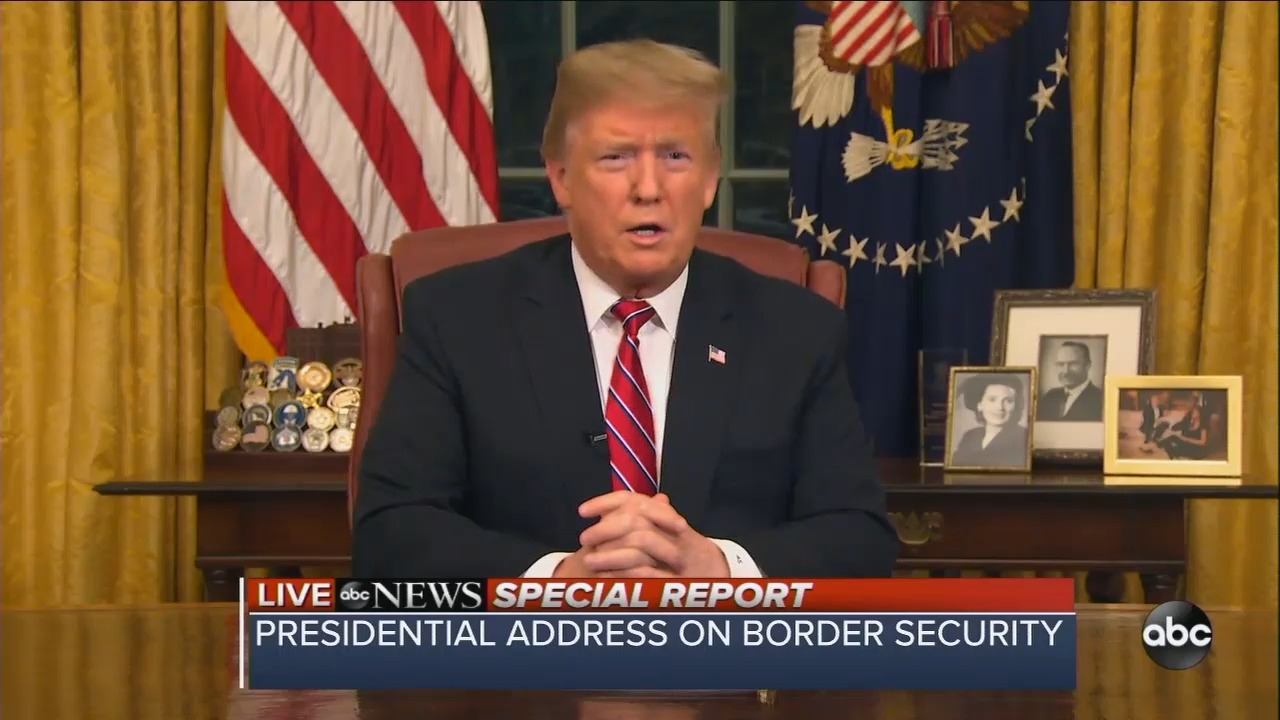 So this week brought a presidential address to the nation on the hot button subject of building a wall at the southern border. And the media? Well, they were intent on focusing on what they insisted would be nine minutes of presidential lying.

What did the media not say on the subject of walls? What did they go out of their way to ignore? Well, anything that would indicate that whether it is Democrats Nancy Pelosi and Chuck Schumer or the media itself - they are all crazy in love with walls. Walls for themselves.

Let’s start with a report that did not surface in all the mainstream media coverage of building a wall.

Recall this line from the President’s speech, bold print supplied:

Well now. Let’s put aside the private homes of “wealthy politicians” - and focus on two places that supposedly are “open” to the public. That would be the United States Congress and the media. And let’s focus on all the media attention that was conspicuously lacking on a particular aspect of these two places this week.

Congress, of course, is physically located in seven major buildings on Capitol Hill in Washington DC. They are: the United States Capitol, plus three Senate office buildings (Russell, Dirksen and Hart by name) and, on the House side, three House office buildings (Cannon, Longworth and Rayburn by name.)

To get personal, I in the long ago worked in two of the House buildings (Longworth and Rayburn) and one on the Senate side —  the oldest, the Russell building, that was opened in 1909. And of course, as with lots of aides to a congressman or senator, I spent my fair share of time in the US Capitol building itself. I departed Capitol Hill professionally in late 1983 when I went to work on the Reagan re-election campaign, but until December of 2004 I had an apartment a few blocks from the Capitol.

What does this have to do with the missing media story of the week? Plenty. When I worked on Capitol Hill —  in both House and Senate — the Capitol “campus” was wide open. Anyone could drive the side streets between the House and Senate office buildings. There was a parking lot on the East Side of the Capitol —  the side that up until 1981 was used for presidential inaugurations. Anyone — say again anyone —  could drive onto the parking lot, find  a space and go about their business.

Now? None of this - absolutely none of this - is possible, much less permissible. Why? Because Congress —  as the President hinted at in that line in his speech about wealthy politicians building walls, fences, and gates around their homes —  has surrounded itself with all manner of walls and barriers of one kind or another.

It is now completely impossible for Mr. and Mrs. Average America -Sally-and-John Q. Public to drive between, say, the Rayburn and Longworth House Office buildings because those streets are now physically closed off to the public. Drive onto the grounds of the Capitol? Are you kidding? There are concrete retaining walls about waist high that physically prevent you from doing so. Steel barriers are there, folded into the streets so they can be raised and lowered for the well— identified VIP.

And the news stories that discuss the fact that Nancy Pelosi and Chuck Schumer work safely behind all of this collection of concrete and steel barriers - all supplemented by hundreds of gun-toting human shields in the form of the US Capitol police? Zero. Nada. (And yes, this kind of security has long existed at the White House for whomever was the president of the moment.)

To be clear? I’m all for it. Why? Because it is not immoral to protect the elected representatives of the United States government behind barriers of concrete, steel and human security with guns in a day and age when there are maniacs out there with bombs and guns who would delight in targeting any of the these people.

They deserve protection — and most assuredly they get it, the Scalise shooting the exception that proves the rule. There were no walls at that baseball field that day that shooter James Hodgkinson suddenly appeared to open fire —  but there was a US Capitol policeman, armed, a human barrier, who brought down the shooter and saved lives.

The point is not should all these politicians have various concrete, steel and human barriers to protect them. They should and must. The question is —  where were all the stories this week about the fact that these barriers exist to protect, among others, Nancy Pelosi and Chuck Schumer?

They weren’t there —  because, of course, the concrete, steel and human barriers that protect Pelosi and Schumer work. And that reality is not to be permitted to be discussed by the liberal media because if it works for Chuck and Nancy —  obviously it would work at the border as well. And that cannot be admitted. Walls, to quote Nancy herself, are “immoral.”

And the other place walls and security barriers of some type work - which the media will never admit? Two stories from this week.

First, as noted here in NewsBusters by P.J. Gladnick, CNN’s Jim Acosta had a bit of an “oopsie” moment on the wall story. P.J. wrote it this way:

If the Guinness World Records were to ever have a category for self-owning, this tweet by CNN's Jim Acosta would definitely be towards the top of the list.

….Here’s what he said in the video:

“And here's some of the steel slats that the President has been talking about, right here. As you can see, yes you can see through these slats to the other side of the US-Mexico border but as we're walking along here we're not seeing any kind of imminent danger. There are not migrants trying to rush towards this fence here in the McAllen, Texas area. As a matter of fact, there are some other businesses behind me along this highway. There's a gas station, Burger King, and so on but no sign of the national emergency that the President has been talking about. As a matter of fact, it's pretty tranquil down here.”

You're right, Jim. It is pretty tranquil there because that steel slat fence you featured is preventing migrants from trying to rush across the border as you correctly pointed out. The residents of that area and the nearby businesses are not seeing any kind of imminent danger due to that steel slat fence.”

Ouch! This “oopsie” went viral, as they say, with all manner of folks realizing what Jim Acosta seemed to miss: the wall was working.

Then there was this story about CNN by NewsBusters’s Kristine Marsh: “CNN Scraps Interview With CA News Station Upon Finding It's Pro-Wall.”

“The clearest sign of the liberal media’s bias comes when they purposefully choose to exclude information that doesn’t affirm their agenda. That apparently happened yet again this week, after CNN scrapped an interview with a border city's news station, after they had reported that the wall was effective at deterring illegal immigration. After this story received attention, CNN put out a statement Friday denying that there was any anything nefarious about what they did.

KUSI News in San Diego, California, shared last night on their evening news and on Twitter, that the major network had requested a segment with one of their reporters for a local perspective on the effectiveness of the border wall. However, the network quickly retreated from that request after, the station believes CNN discovered his past reports showing a barrier actually works.

KUSI tweeted out their news report calling out CNN ghosting them as a ‘sign of the times:’”

Sign of the times indeed. God forbid that CNN report a factual story that the wall works —  unless that story is reported by mistake.

But there is another story that CNN is also quiet deliberately ignoring — that would be the media version of the silence on all that protection for Pelosi and Schumer.

The fact of the matter is that when Jim Acosta shows up for work at the DC or New York CNN bureaus — he is met by security. I won’t go into the specifics, but as an ex-CNNer suffice to say both bureaus are well protected from wannabe assailants.

And most assuredly, CNN is not alone as a media outlet in protecting its employees with some form —  concrete, steel or human —  of protection. Why? For the same reason Capitol Hill is protected. Because, as the President said exactly in his address, all these institutions have security of some sort not “because they hate the people on the outside, but because they love the people on the inside.”

But why the willful silence on what is as obvious a story as can be? There is an answer.

The reason for the use of concrete, steel and human security barriers —  whether on Capitol Hill or at CNN or at that now-existing border wall in San Diego or in Texas (as featured by Jim Acosta himself) is as obvious as the nose on your face. It is to protect those inside the barrier from those outside wishing to do willful, deliberate harm. And they work.

But in today’s world for the media to admit the obvious — even to cover the obvious —  would mean admitting that President Trump and all those clamoring for the wall are correct.  And the media can’t have that.

In other words? Walls for them - but not for you.

And right there is one of the biggest uncovered stories of the week.