The Media's Meltdown Over Rush Limbaugh 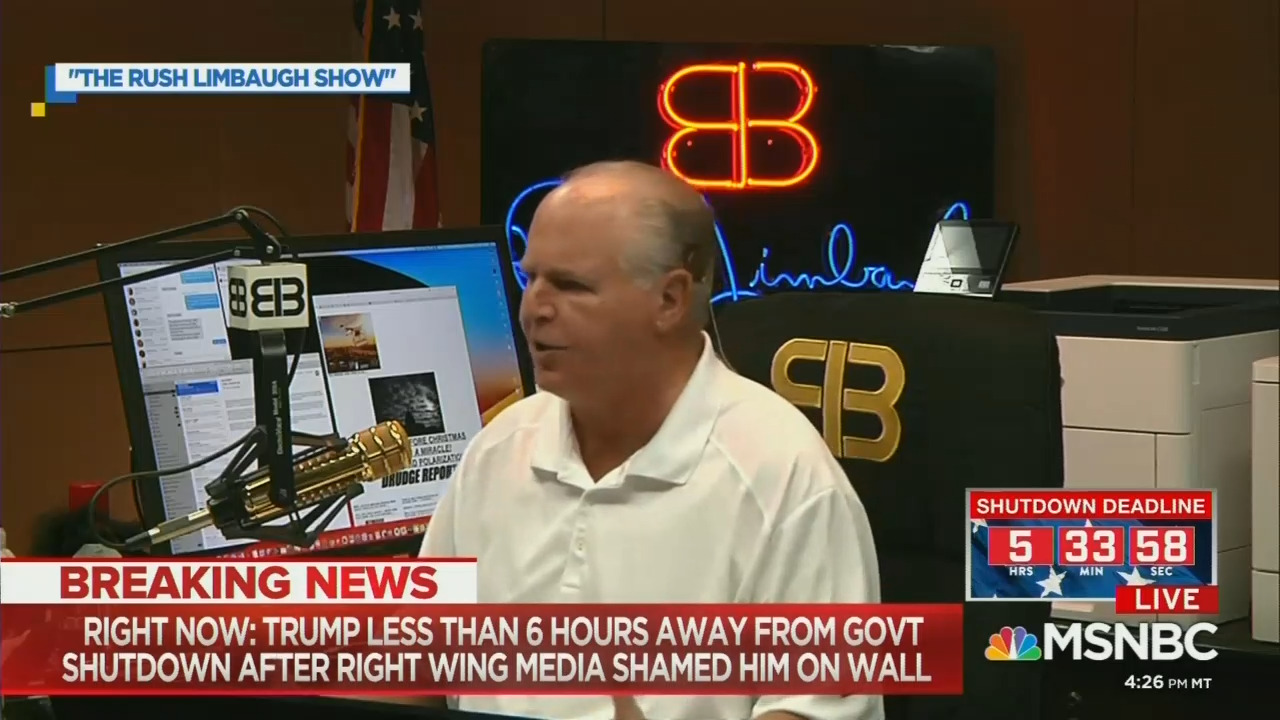 It was the day before Christmas and the media was stirring, targeting Rush.

Yes, while most Americans were bustling around to get the last minute presents or beginning to pour the egg nog, the liberal media was having (again!) a fit. The cause of it all this time was…..Rush Limbaugh.

Yes, you read that right. And Rush, previously scheduled to be out there Christmasing himself made it a point to be back on his show on Christmas Eve to take note of the media circus that had made him the the sudden main attraction.

It all started as the Trump showdown with Chuck Schumer and Nancy Pelosi over funding for the wall was presumed by the media and its legion of liberal leakers to be over. The President, Americans were told, had caved. But in fact, as is frequently the case, the liberal media  - not to mention Chuck and Nancy - had gotten it wrong.

Word reached Rush through the best possible of sources: the President himself. Rush had stood by the President’s decision to let Democrats shut the government down rather than accept no border wall funding. When the President, through a third party, re-affirmed that decision to Rush in a Direct Message that said “The president wants you to know he’s not going to sign it unless there’s proper money in it for the wall,” in total Trumpian style standing by his guns, the media freaked out in serious fashion. Perhaps adding to their frenzy was the knowledge that Rush himself had earlier been a guest at a White House Christmas Party where he had a chance for a one-on-one moment.

For those Americans who looked up from their wrapping duties and took notice, it was hilarious to see the media all heated up because they had been shown to be utterly wrong in their predictions - and Rush (again!) 100% right. So, what else to do but blame the shutdown on Rush? Rush had a fine time playing a montage of all those who tried to pin the shutdown on him. A sampling from Rush’s show included these:

KATY TUR: Rush Limbaugh is in control of the government.

BAKARI SELLERS:  You have a president in Rush Limbaugh.

PHIL RUCKER: Well, this week, with the shutdown I would say Rush Limbaugh.

RINA SHAH: This entire debate has been hijacked by Limbaugh.

MARIA CARDONA: … puppet masters in the likes of Rush Limbaugh.

MICHAEL SMERCONISH: I don’t think we’d be in a partial government shutdown without those voices like Rush’s.

BRIAN STELTER: This is kind of a Rush Limbaugh shutdown.

NORMAN ORNSTEIN: This is a Trump-Limbaugh shutdown.

But, of course, none of this was true. Here’s Rush explaining the facts on his Christmas Eve show:

“I shared with you the message.  “I just got a message from the president that he’s not going to sign this. He will veto it unless there’s money in it for border security and the wall.”  The media took that story and turned it into Trump had his pen ready to go. He’s on the verge of signing it!

And then I start complaining on the air and somebody walks in and says, “Mr. President! Mr. President! Rush Limbaugh… (stammering) Y-y-you’re losing Rush Limbaugh! He’s going nuts,” and Trump stops.  “Oh, really?  I better not sign it.”  That’s not what happened!  What happened was the president got word to me that whatever news stories we all had that said he was gonna sign it were not true.  He wasn’t.  It wasn’t that anybody had changed his mind.

…(The media wants you to think that) He’s there, he’s poised, he’s got that pen in his hand. He may even have the D already written down! Then they run in there and say, “Mr. President! Mr. President! Rush Limbaugh says you shouldn’t sign it,” and Trump stops.  “Oh, really?  Okay. Well, then I won’t.”  That’s not what happened.  But they want you to think that’s what happened because it diminishes Trump.  And it gives them another chance to shoot at me, which they, of course, love doing as well.”

As the year comes to an end and 2019 dawns, this Christmas episode serves as a reminder of just what lies ahead. As if it has not already been crystal clear from the moment Trump came down that Trump Tower escalator in 2015, the media had two takes on the President. The first was not to take him seriously.

Then, when it became apparent millions of Americans were in fact not only taking him seriously but were about to elect him President of the United States - they piled on and piled on. Story after story was written along the lines that he had no chance to win. And…they were wrong again. Now, two years in to the Trump presidency the goal has been to both stop him from doing anything substantive (this is what was behind the Kavanaugh circus) not to mention trying to get him him tossed out of the Oval Office in an American style coup, using the Mueller probe or, if needs be, impeachment to do it.

The media’s Christmas freak out over Rush Limbaugh should serve, in fact, as a warning of what is to come in the New Year. Which is to say when Americans come out of their holiday reverie, they will find the media is going to ramp up its assault on the President, doing its level best to drive a wedge between Trump and his supporters. It will be a 24/7, all day, all night constant media bludgeoning with one purpose and one purpose only: to remove Trump.

What happened with Rush Limbaugh over the Christmas holidays is, one can be certain, only the beginning.

And a Happy New Year to you!