The Gutless Silence of Steve Schmidt

The ex-Bushie turned Never Trumper who foams over there at MSNBC had spewed this jewel of hate the other day:

“Mark Levin, and Rush Limbaugh, and Breitbart, and NewsBusters, and Judicial Watch, and all the rest of them, have blood on their hands for the incitements that they have made that have triggered and radicalized these crazy people.”

This, of course, came following the attack in Pittsburgh by an anti-Semitic, Trump-hating nut and a wacko would-be bomber with a long rap sheet and a seriously troubled background.

It’s precious to hear Schmidt take such outrage at anti-Semitism on MSNBC. I wonder if he can identify the anti-Semite who said the following:

"If the Jews want to get it on, tell them to pin their yarmulkes back and come over to my house."

"We will not stand by and allow them to move this brother so that some white interloper can expand his business.”

The “white interloper” in question was a Jewish businessman. 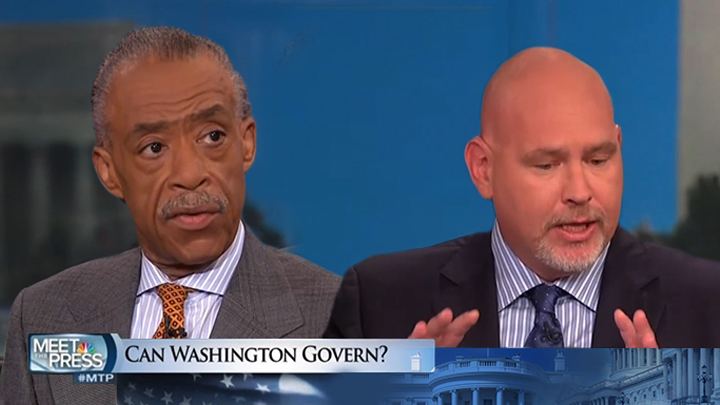 Who said this anti-Semitic garbage? Why, none other than Steve Schmidt’s MSNBC colleague Al Sharpton, the host of MSNBC’s PoliticsNation.

(Schmidt and Sharpton have appeared together on many MSNBC and NBC shows, including the July 14, 2013 Meet the Press.)

The second quote was said in defense of one Leonard Jeffries of City College of New York. And what was Sharpton defending? Jeffries had set off a firestorm in a speech saying that “rich Jews” had financed the slave trade, controlled the film industry and more.

Oh yes, there’s still more. In 1991 a Jewish driver, in an accident in the Crown Heights section of New York, hit and killed a black child. Here’s an excerpt from the New York Times of the day:

“The Rev. Al Sharpton led some 400 shouting, chanting black protesters through the heart of Hasidic Crown Heights on the Jewish Sabbath yesterday as a blue wall of police officers made sure that the march went off without serious incident.

The police vastly outnumbered the marchers. Double columns of officers on each side and motorcycle patrols kept pace as a helicopter circled.

About 40 bearded, black-clad Hasidim watched from the porch of the Lubavitcher headquarters on Eastern Parkway as the marchers passed, chanting "Whose streets? Our streets!" "No justice, no peace" and scattered obscenities.”

Here’s a direct quote from the sworn testimony of one Efraim Lipkind, a witness to the Sharpton-led anti-Semitic riots in Crown Heights.

“Then we had a famous man, Al Sharpton, who came down, and he said Tuesday night, kill the Jews, two times. I heard him, and he started to lead a charge across the street to Utica.”

And what do we hear from Steve Schmidt about the man who did all this - and is now his MSNBC colleague? Total and complete silence. But its okay to smear Mark Levin - who is Jewish - Rush Limbaugh, NewsBusters, Judicial Watch not to mention Breitbart, the latter founded by the Jewish Andrew Breitbart and today run by Larry Solov - who is also Jewish.

It’s not just that this is so much BS, which it is. The responsibility for the attack in Pittsburgh - as with any violent attack anywhere - is solely the responsibility of the perpetrator. The problem with Schmidt is his utter, brazen phoniness. Schmidt goes after people who have zero to do with encouraging violence against anybody, much less Jews, and some of whom are themselves Jewish. But when it comes to dealing with his own MSNBC colleague who has developed over the years a major league reputation for anti-Semitism? Will Schmidt utter a negative peep about the network that employs them both? Suddenly Schmidt loses both his tongue - and his guts.

Take a look at that Schmidt statement again, the section that says this: “….the incitements that they have made that have triggered and radicalized these crazy people.”

As written here at the beginning of the year, there was a guy who wrote this to his local paper in Illinois:

“One of my favorite TV shows is The Rachel Maddow Show on MSNBC.”

That is the self same guy, James Hodgkinson, who shot Congressman Steve Scalise and four others. So by Schmidt’s logic, his fellow Trump-hating colleague Rachel Maddow and his own Trump-hating MSNBC network were responsible for “….the incitements that they have made that have triggered and radicalized” the clearly crazy Scalise shooter. But not a peep from Schmidt on that either. And to be clear, again, the sole person responsible for shooting Congressman Scalise was….the shooter. Not Rachel Maddow and not MSNBC.

Mr. Schmidt is welcome to his views. God bless a free country. But by the same token, it is necessary to point out the unbelievable hypocrisy for which he has become such a staunch advocate.