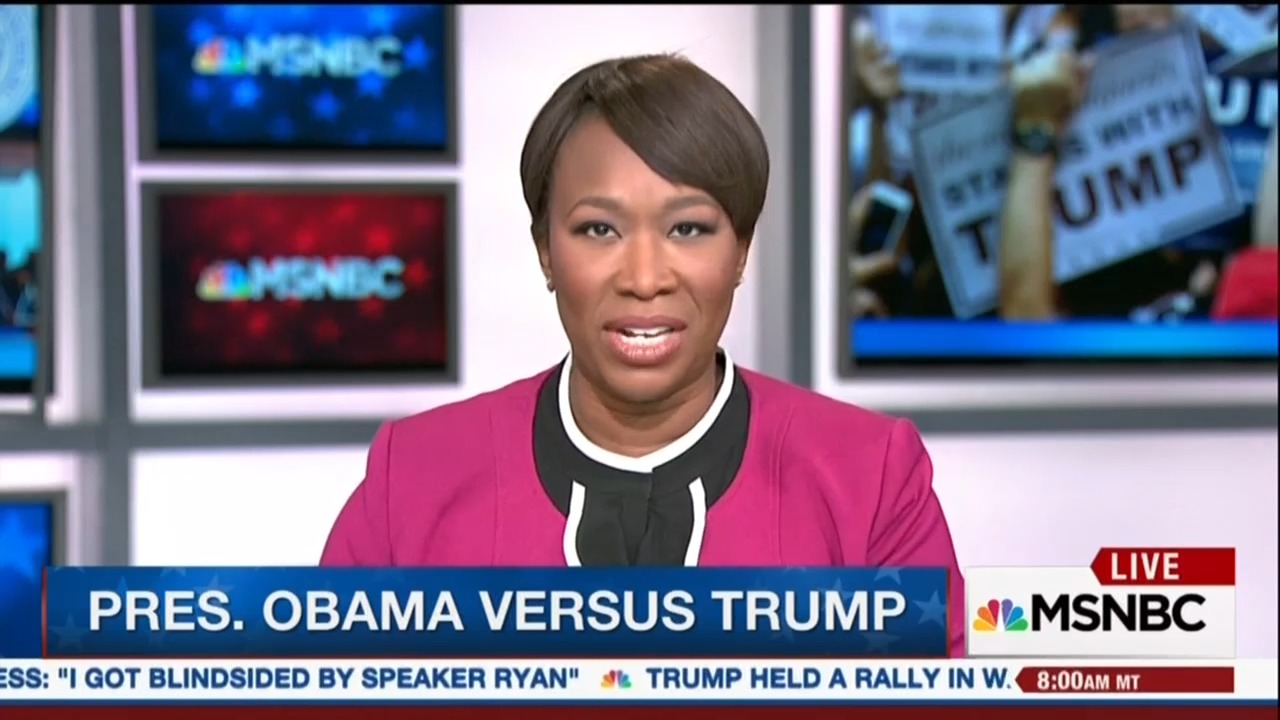 Now that the demand for Laura Ingraham’s show be strangled in its crib has failed? Now that yet another attempt to whack Sean Hannity off the air has gone with the wind?

Now comes the Case of Joy Reid. Suddenly, the liberal “get the host” guns have gone silent.

Let’s start with this Fox headline: “MSNBC's embattled star Joy Reid could be in serious trouble if she lied about hackers planting slurs.”

The story says in part:

“MSNBC star Joy Reid claims hackers are responsible for homophobic slurs that were recently unearthed on her pre-fame blog, but many people don’t believe her story. Now that the FBI is involved, Reid could be in legal trouble if her doubters are proven correct.

Fox News senior judicial analyst Judge Andrew Napolitano said the MSNBC host “could be in very serious trouble” if she made up the story about hackers planting the anti-gay blog posts. Reid could even be charged with obstruction of justice for “diverting the FBI’s attention from real crimefighting to fighting a phantom crime,” Napolitano said.

Despite admitting to making homophobic slurs in the past, Reid blamed hackers on Monday when Mediaite unearthed a new batch of damaging posts on Reid’s now-defunct blog. Her story was met with widespread skepticism and Fox News host Tucker Carlson even called Reid’s version of events “ludicrous fantasies,” while others have pointed to the Library of Congress archives to debunk her claim. While MSNBC has stayed silent, Reid’s attorney issued a statement claiming the FBI is now involved.”

Ahhhh yes. The FBI. As if that troubled bureaucracy doesn’t have enough to do.

Now here’s where it gets interesting. As has been pointed out elsewhere (over at Mediate) there is this from Mediaite’s Joseph Wulfsohn: “The Media Yawns at Homophobic Posts on Joy Reid’s Blog…Now Imagine If It Were Hannity.”

After noting all of the Hannity coverage by the media over Hannity’s relationship with Trump lawyer Michael Cohen, Wulfsohn writes:

“Think about how the media would react if these (Joy Reid) posts existed on Hannity’s old blog and most importantly, if he gave the absurd explanation she and NBC have for the existence of such posts.

It is that simple. And it doesn’t have to be Hannity. If the kind of homophobic posts attributed to Joy Reid were found on old blog posts of Laura Ingraham, Tucker Carlson, Rush Limbaugh or any other conservative media personality of note one can indeed imagine the reaction from the liberal media. There would be a demand for that personality’s head. Their show’s sponsors would be assaulted with demands to leave. On and on would go the drama until conservative personality X was finally A) fired outright or B) rendered so radioactive that the only option was to retreat to the nearest bed, crawl under it and never show their face in public again.

But it isn’t conservative media star X on whose blog posts these anti-gay rants have been discovered. It’s mega-liberal Joy Reid. (And full disclosure, we once were co-panelists on a Bill Maher show. She was, as required, opinionated, very left-of-center and, yes, in fact very nice.)

But whether Joy Reid is nice or not, whether she is far left or even-further-than-that-left, the real question here is the one conservatives are forced to face all the time. Should she lose her television show for any other reason than her ratings?

But as someone who is well on record at various points as having defended conservative radio and TV stars when they are under ferocious assault I would respectfully say - leave Joy alone. Sure, her NBC bosses have the right to give her a thumbs up or thumbs down. If in fact she has lied, as is alleged by some, that too is a decision for the NBC brass.

We are too well into an increasingly very dangerous situation where television and radio personalities are being judged - primarily conservatives by left-wingers - on a scale of “how offensive are they?” With the slightest twitch immediately declared as a firing offense. The Ingraham episode was especially egregious.

Typing out a short tweet that triggered a suddenly, if unwillingly, famous high school student who has complained publicly about being rejected by a few colleges (and who hasn’t been?) supposedly for his liberal activism was not even remotely close to a lose-your-show offense.  But the trigger was instantly pulled and Laura was under assault. It was disgraceful - or, as she herself said - “Stalinist.” Notably, it failed - and her audience rallied, sending her ratings up.

In the Case of Joy Reid there is disagreement here with that wise old New Englander Ralph Waldo Emerson. So allow me to change his famous saying to say that when it comes to the issue of chasing personality X off the airwaves “A foolish consistency is not the hobgoblin of little minds.” There is nothing foolish in speaking up consistently for a free press and free speech, no matter the direction - left or right - from which it comes.

If Joy Reid is to lose her show - let her lose it because her ratings tank. If in fact she lied about her blog posts, honesty and mea culpa is the best policy - leaving the audience to judge.

But in this corner? Where defenses have been made here and elsewhere for Lou Dobbs, Glenn Beck, Rush Limbaugh, Sean Hannity and Laura Ingraham?  Let Joy Reid go be Joy Reid.

And let the God of TV ratings be her judge.