This kind of thing is no longer amusing or simply worth a shrug. It is very, very disturbing.

Here’s the headline from The Washington Times: 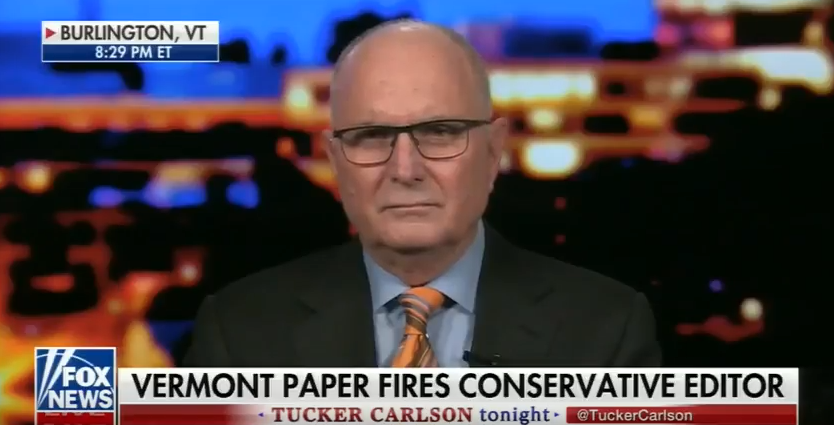 Gannett leaders fired Mr. Finley on Monday after determining that he violated the company’s social media guidelines ‘on a number of occasions,’ the Free Press reported Monday evening.

The tweets that led to his termination started when a Twitter user said the proposal to add a third gender option to Vermont driver’s licenses was ‘awesome.’

‘Awesome! That makes us one step closer to the apocalypse,’ Mr. Finleyresponded Friday, The Washington Post reported.

After catching some heat for the tweet, he attempted to elaborate, writing, ‘The world isn’t coming to an end yet. I think it’s just falling apart, piece by piece.’

‘My issue is simply why is this awesome?’ he asked one user.”

Finley had often spoken his mind on Twitter since becoming the newspaper’s editor in 2016, firing off a mixture of harsh opinions and jokes that many people often found offensive. But his series of tweets this month criticizing a proposal for Vermont to offer a third gender option on driver’s licenses went too far, the company said.

‘We encourage our journalists to engage in a meaningful dialogue on social media, but it’s important that the conversation adhere to our overarching values of fairness, balance and objectivity,’ Randy Lovely, a Gannett executive, told the Burlington Free Press after Finley’s ousting.”

Mind you, this latest example of crossing the leftist speech police comes after we learn that ex-Google employee James Damore is filing suit against his former employer for his audacity in diversity by expressing - gasp! - some conservative thoughts on the way the leftist-group think out there in Silicon Valley really works. Over at The Federalist Rachel Stoltzfoos has made her way through the paperwork and uncovers the distinctly totalitarian flavor of the Google mindset at work. Appropriately enough she adds a warning: “This article quotes communications that contain obscene language.” Here are some examples:

“The lawsuit James Damore filed against Google on Monday provides a fascinating glimpse into the way the company and many of its employees see the workplace in terms of a demographic hierarchy, and what happens to those who diverge from the consensus view.

Details from diversity training sessions, accounts of alleged reverse discrimination, and screenshots of internal communications on company forums and message boards in the lawsuit cast the company culture as extremely hostile to employees with unpopular opinions, especially heterosexuals, men, white people, and those who hold conservative views.

…In screenshots laid out in the lawsuit, “Googlers” as they call themselves, talk openly of blacklisting and purging the company of employees whose views or identities are deemed outside the bounds. Employees were allowed to award those who spoke out against Damore’s memo “peer bonuses” — a company kudos of sorts monitored by the “Google Recognition Team.”

...’We want to be inclusive of people not ideas’ one employee identified as Alon Altman wrote in a message included in the lawsuit. Damore says that sentiment was backed up at an Inclusion and Diversity Summit he attended in June, when he was told by Google employees the company does not value “viewpoint diversity,” but actively strives for ‘demographic diversity.’

…After a coworker leaked his memo to the public, Google’s human resources instructed Damore to work remotely for a while to let emotions cool, after he forwarded them a particularly angry email from another employee. “You’re a misogynist and a terrible person,” read a late-night email from Alex Hidalgo, a Google engineer. ‘I will keep hounding you until one of us is fired. Fuck you.’”

Which is to say, Google is insisting that, as with the old segregationists of the last century, their employees are to be judged by race and their thoughts and speech accordingly.

And yes, I will recall my own experience at CNN, where mocking a leftist media organization for being repeatedly flagged for anti-Semitism and its fascist-style insistence on removing conservative hosts and commentators from television and radio (Hannity in that case) got me fired.

“….it was 10 people using algorithms and bots to make themselves appear to be tens of thousands who hated me. So it took us about six months to track this all down, and we did. And we were able to demonstrate to all of these advertisers that 90% of these complaint emails that they were getting were being sent from people who had never been their customers and didn’t even live in the state. We had to be able to show the advertisers and the sponsors and other associates this was all bogus. ‘Cause people don’t want to put up with this garbage.”

As he also pointed out, “they tried this on Hannity” and others.

There’s more out there, but these examples suffice. Over there at National Review, David French has taken his usual thoughtful look and headlines this:

French gets the larger problem on the spot, writing:

“Let’s ponder a disturbing question: What if the crisis of free speech on college campuses, with their often extreme intolerance for conservative points of view, represents the high point for free expression in a student’s life? In other words, what if the “real world” is more repressive, more ignorant, and more punitive toward dissenting speech? What if entire corporations adopt the ideologies and norms of the most ruthless campus social-justice warriors, ruining careers and depriving employees of their livelihoods when those employees dissent from the dominant ideology?

In other words, what if the rest of corporate America starts acting like Google?”

The cyber ink was barely dry on French’s piece when Gannett fired Denis Finley in precisely the manner French was discussing.

Newsflash? Somewhere this reign of totalitarian terror against free speech has got to stop. This is now way beyond what goes on at Gannett or Google or CNN or anywhere else where this anti-free speech, Stalinist-style behavior manifests itself. This is becoming a serious threat to a free press, free speech and free thought.

On Friday night, Fox’s Tucker Carlson had Denis Finley on his show, not for the first time making both his own show and Fox in general a beacon of support for free speech and a free press. Tucker pointed out that Finley’s sin seemed to be merely asking questions and he wondered why it was “out of bounds.” Finley, a long time journalist, noted that “a lot of media companies” say they believe in objectivity but will not tolerate any questioning of leftist orthodoxy. He was expected to “toe the line” with left wing orthodoxy.

Asked Tucker: “Do you see this as a trend? I’ve begun to notice where big companies have become the heavies for the cultural left. You think of big companies as conservative but all of a sudden they’re the ones enforcing orthodoxies. Is that my imagination?”

To which Finley replied: “No, I don’t think it is. I think big companies, a lot of big media companies are more or less encouraging the left…I don’t think they’re objective. I don’t believe that they want debate. I think that they want us to conform. And conform to the prevailing ideology that’s out there. And the prevailing ideology that’s out there is leftist. And when the leftists take you on, they’re big in numbers and people are afraid to say anything against them. So they often win.”

Exactly. And even if they are not “big in numbers” - as Rush precisely demonstrated - they can frighten others into thinking they are.

Not to put too fine a point on this but this stuff is terrifyingly dangerous. It is at once racist, as the Damore Google lawsuit illustrates, and totalitarian at its core.

The question now is: what to do about it?

And more than conservatives should be charged with finding the answer.