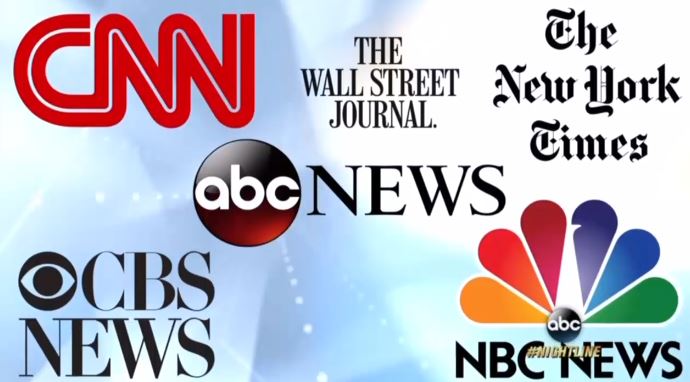 Let’s run through a short list at the end of the year.

CNN - Headlines a breaking news Trump story that turns out to be completely wrong. Staffer fired for sexual misconduct.

NBC - Matt Lauer fired for sexual misconduct. And then there’s the rejection of that Ronan Farrow story on NBC pal Harvey Weinstein.

PBS - Charlie Rose fired from there too.

In other words? In other words across the media landscape one player after another fell with a sudden resounding crash after either reporting what the President calls “fake news” or  having let loose their private sexual demons on unsuspecting colleagues or others.

Which is to say, 2017 has turned out to be what Britain’s Queen Elizabeth said of her experiences in 1992, a year Her Majesty described as follows:

“1992 is not a year on which I shall look back with undiluted pleasure. In the words of one of my more sympathetic correspondents, it has turned out to be an ‘Annus Horribilis.’ I suspect that I am not alone in thinking it so.”

In the Queen’s case in 1992 two of her four children announced they were getting divorced, a book was published revealing that a third, son Prince Charles’s marriage to Princess Diana, was headed in the same direction. And a rash of stories appeared in the British press alleging both Charles and Diana had been having affairs with others. Annus Horribilis - which translates as “horrible year” in Latin - indeed.

But why an Annus Horribilis for the media in 2017?

There are two reasons, one of them easy to understand.

Reason One? Sex is, well, sex. Everybody gets that.  Not hard to understand. Celebrities and media types are not immune. If anything many of them operate in environments where their sense of entitlement to just about anything they desire - beginning with sex! - is fed and encouraged.

Yet the lesson here for all these media institutions in dealing with issues of sexual harassment is to be very, very careful what you wish for. This problem first arose in the 1990s. As noted in this space last fall, the Clarence Thomas-Anita Hill episode was, in retrospect, the first indication the media was going to have a problem of their own creation. Then-New York Times columnist Anna Quindlen started her infuriated column at the time in this fashion:

You will notice there is no please in that sentence. It is difficult to feel polite, watching the white men of the United States Senate and realizing that their first response when confronted with a serious allegation of sexual harassment against a man nominated to the high court was to rush to judgment. It is difficult to feel polite, knowing they were more concerned about how this looked for them, for their party, their procedures and their political prospects than in discovering what really happened.”

All manner of liberal media types and liberal political leaders - feminists preeminently - agreed with Quindlen. And a mere seven years later? When Bill Clinton was the new target? There was a complete 180. Now sexual harassment, groping, and worse even rape were dismissed by many in the liberal media as “only about sex.” Having walked themselves all the way out on that sexual harassment limb in 1991 they quickly walked back in and changed their mind in 1998.

Now? After making this (via the NBC Access Hollywood Trump tape) one of their cries about why Trump should never be president - thanks to Harvey Weinstein the liberal media is suddenly swamped in a crisis of their own making. Trump had the good fortune to have the issue raised before the election - and he won anyway. Not so the case with his media critics as they weren’t running for office. So once the floodgates opened - the only option for networks, movie studios and newspapers was to fire a Charlie Rose or a Matt Lauer or suspend a Glenn Thrush or in essence cut short the entire careers of a Weinstein or Spacey and the rest. Nothing better illustrates the old wisdom of being careful what you wish for. In this case this has collectively done serious damage to liberal media.

But Reason Two? Reason Two is simultaneously both understandable but less so. Reason Two revolves around the liberal media’s severe case of Trump Derangement Syndrome. The normal skepticism of the media to a powerful political figure - the President in this case - is perfectly in the mainstream. The problem occurs when the news media has a serious political and personal hostility to that political figure. Once headed down this path, the governing impulse is to get the President, no matter how, and as soon as possible.

So in this case a negative media narrative has been formed about Trump. The Trump-Russia collusion story, which dominated the media, has to the frustration of far too many journalists, not yet been proven.

Clearly in this environment the ABC story that said then-Trump advisor General Michael Flynn was instructed before the election by the then-candidate Trump to contact the Russians was jumped on - before thoroughly vetting it to find out that it was completely wrong. It was not candidate Trump who had issued the instructions but rather President-elect Trump, a move completely normal for an incoming president. (And for that matter, there is abundant evidence that other candidates, notably Democratic nominee Jimmy Carter in 1976, did exactly what ABC first charged Trump with doing, with Carter, according to then-Soviet US Ambassador Anatoly Dobryin, actually sending campaign advisor Averell Harriman on a secret trip to Moscow to meet with then-Soviet leader Leonid Brezhnev. No one in the media cared when this became public.)

Likewise, the CNN story that was breathlessly reported as the Trump campaign having preliminary knowledge of a Wikileaks posting was false. The campaign in fact saw the posts when everyone else did - after they were posted and were accessible to the public.

What the ABC and CNN stories have in common, of course, is that they came from networks that have made clear in their daily coverage that they are out to get the President. With that mindset, the two stories originally reported were reported, it seems clear, out of a salivating desire not to report facts but rather to assume that what the two networks were told were true. And true for no other reason than that ABC and CNN wanted them to be true because they despise Trump.

If anything should serve as a red flag for a network or newspaper, this should be it. When they reach the point that facts don’t matter but the politics do - and politics drives the reporting, in this case the politics of getting a President they hate - only bad things can come of it.