Think of all those liberal media headlines about Roy Moore.

“Washington Post: In Washington, the Republican dam is breaking against Roy Moore”

“Washington Post: Woman says Roy Moore initiated sexual encounter when she was 14, he was 32”

One could go on, with similar headlines from The New York Times or the Los Angeles Times or Politico or CNN and MSNBC and many, many more.

Now let’s change a name and time. It is anytime after July 18, 1969. On that night, Massachusetts Senator Ted Kennedy drove off a bridge on Chappaquiddick Island in Massachusetts. The car plunged underwater, the Senator escaped. But he left his passenger, 28-year-old Mary Jo Kopechne behind, not seeking help until the next day, by which time Ms. Kopechne, initially surviving in an air bubble, had drowned.

There were headlines aplenty, although in fact the event unfolded at the very moment the United States was about to land the first astronauts on the moon, a triumph that had the entire world watching every minute with little distraction. Kennedy would eventually appear before a local magistrate and plead to, as Wikipedia drily recounts “a charge of leaving the scene of an accident causing bodily injury.” 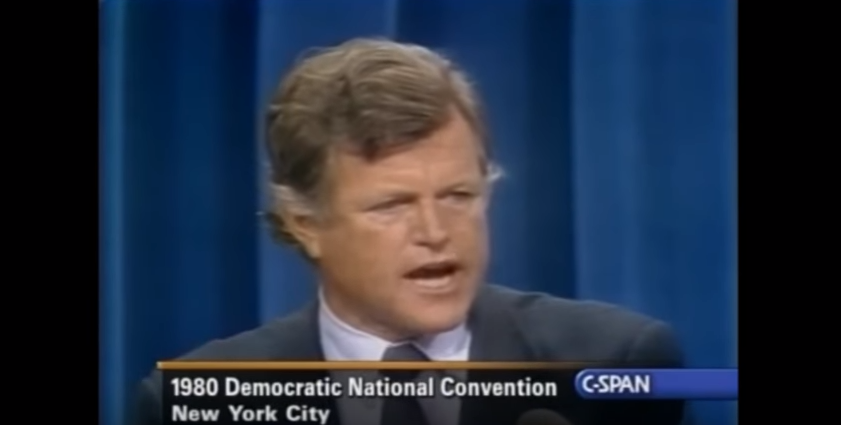 Were there headlines? Yes, of course. But eventually they melted away, recurring only from time to time as when Kennedy challenged President Jimmy Carter for re-nomination in 1980. The main political effect of Chappaquiddick was to kill Kennedy’s once presumed certain chance to be elected president. Instead he would go on to spend the rest of his life in the United States Senate, earning the beloved moniker of  “The Lion of the Senate” or “The Liberal Lion of the Senate.” A man with a serious alcohol problem, little media attention was paid when he got himself into scrapes. It was just Teddy being Teddy.

But there was Michael Kelly, a tenacious, fearless and inquisitive journalist for at various times The New York Times, The Washington Post, and The New Yorker. (Kelly was the first U.S. journalist to be killed while covering the invasion of Iraq, in 2003.)  In February of 1990, Kelly let loose upon the world a startling portrait of Ted Kennedy in GQ Magazine titled “Teddy on the Rocks.”

Amidst the portrait of Teddy the drunk and Teddy the womanizer is -yes- a portrait of a man who tried to pick up underage girls. Here’s Kelly on this in his own words.

“In a downtown office, a former congressional page tells of her surprise meeting with Kennedy three years ago. She was 16 then. It was evening and she and her 16-year-old page, an attractive blonde, were walking down the Capitol steps on their way home from work when Kennedy's limo pulled up and the senator opened the door. In the backseat stood a bottle of wine on ice. Leaning his graying head out the door, the senator popped the question: Would one of the girls care to join him for dinner? No. How about the other? The girls said no thanks and the senator zoomed off. Kennedy, the formal page said, made no overt sexual overtures and was ‘very careful to make it seem like nothing out of the ordinary.’ It is possible that Kennedy did not know that the girls were underage or that they were pages and, as such, were under the protection of Congress, which serves in loco parentis. Nevertheless, the former page said she did find Kennedy's invitation surprising. ‘He didn't even know me,’ she says. ‘I knew this kind of stuff happened, but I didn't expect it to happen to me.’”

Recounting another incident of Kennedy and an allegedly underage girl, this one at a bar in Palm Beach, Kelly writes:

“Kennedy regularly finds himself in unseemly scenes. One East Coast playboy recalls an incident a few years ago in a popular Palm Beach bar when "a definitely drunk" Kennedy shoved him against the bar and spilled his beer as the senator rushed out the door with a blonde so young, the man at first mistook Kennedy for an angry father come to take home an underage daughter.”

Realize these two stories of Kennedy antics were published in February 1990. There are other tales in the story, including the famous “waitress sandwich” story in which a a drunken Kennedy and his pal, then-Connecticut Senator Chris Dodd, make a “sandwich” by push the waitress between them.

But the point here is clear. Just the two stories about Kennedy making an approach to two sixteen year old pages and another episode where a witness alleges Kennedy was with a young girl who could have been mistaken for his own daughter are Roy Moore-ish enough that in today’s world there would have been outraged demands for an investigation by the Senate Ethics Committee - and that’s before one gets to the stories of the waitress sandwich and others.

Why did this not happen?

Because there were no outraged demands from the liberal media of the day that something be done about Kennedy. Oh, there were chastising stories. In 1991, in the aftermath of the Clarence Thomas-Anita Hill episode in which Kennedy was noticeably silent he felt compelled to go to the friendly confines of Harvard’s Kennedy School of Government and give a mea culpa of sorts. Kennedy said in part:

“I am painfully aware that the criticism directed at me in recent months involves far more than honest disagreements with my positions or the usual criticism from the far right. I recognize my own shortcomings -- the faults in the conduct of my private life. I realize that I alone am responsible for them and I am the one who must confront them.”

This received dutiful coverage and - that was it. A year later the media was busy helping the emerging Bill and Hillary Clinton knock down stories of Bill Clinton’s womanizing, something the liberal media has done up until this very year when, decades late, some have turned on the former President and his presidential nominee wife.

The point? The point is quite simple.

In all this coverage of Al Franken and John Conyers, never lose sight of the fact that for the liberal media the only reason to demand someone’s head for this kind of behavior is to advance a liberal political agenda. General Douglas MacArthur’s famous farewell speech to an audience of young West Point cadets closed in which MacArthur intoned:

At the moment the demand is for Roy Moore’s head. Beyond that the target is, of course, President Trump. But always, always, always the real reason for all of this coverage is The Agenda, The Agenda and The Agenda. If in fact Franken and Conyers have to be thrown overboard by the media - then over they go.

And for precisely that exact same reason there was absolutely never any intention of throwing Ted Kennedy overboard in the day. When he got too out of hand, he would be chastised in the media like a rambunctious child. But he would be protected, Chappaquiddick  and invitations to underage girls or waitress sandwiches be damned.

In other words? First, last and always the liberal media will protect the liberal agenda. If that means covering for Ted Kennedy or the Clintons - they will do it. If it means the reverse - as it does this moment with the dispatching of the just re-elected liberal Al Franken they will do that too.

And only now has poor Al Franken figured this out.