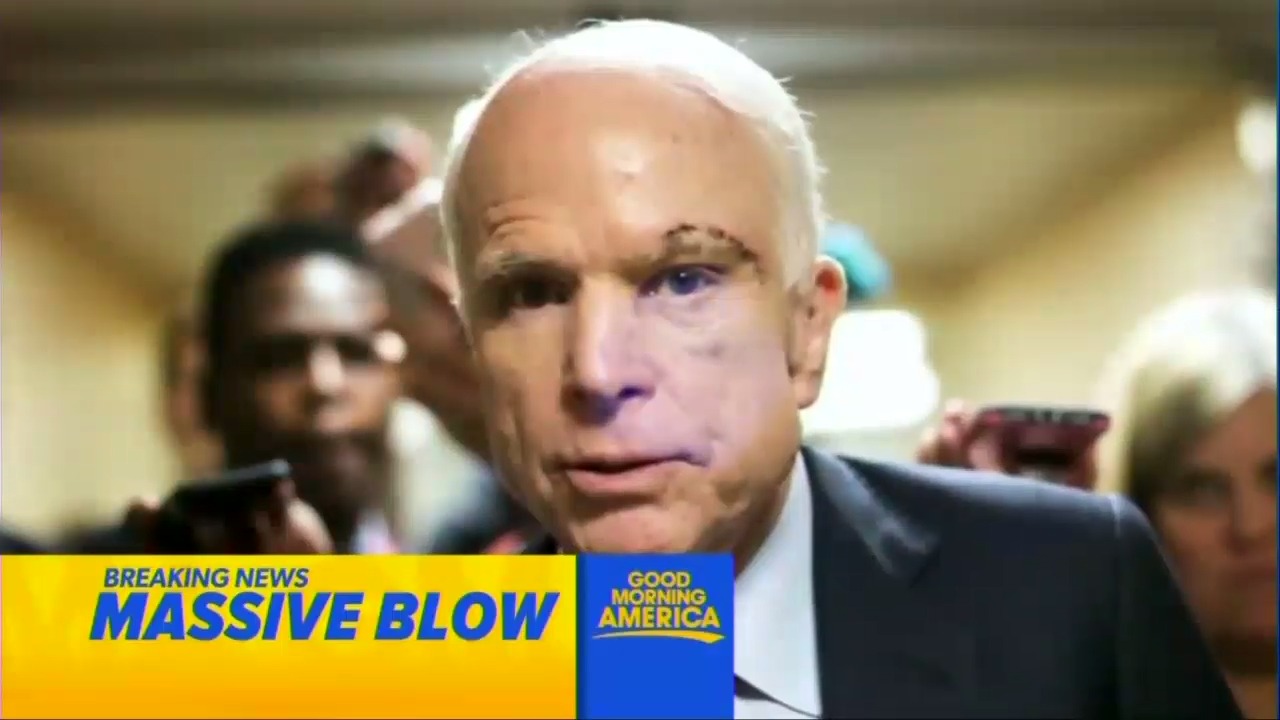 So there is Senator John McCain. Newly returned from Arizona where he learned that he was now battling brain cancer — a battle in which all people of good will wish him well. There is nothing funny to be mocked or chided about with someone beginning a fight against serious disease. God bless.

But the last thing one should do is not have the elementary respect for Senator McCain’s arguments and simply fall silent. They need to be answered. Beginning with his attack on conservative media. Said the Senator in his return speech:

“I hope we can again rely on humility, on our need to cooperate, on our dependence on each other to learn how to trust each other again, and by so doing better, serve the people who elected us. Stop listening to the bombastic loudmouths on the radio and television and the internet. To hell with them.”

With all due respect? There are few people on the political scene who have sought out conservative media to make his case over the years then John McCain. This very minute his own daughter Meghan McCain is not only employed by the “bombastic loudmouths” who run Fox News, she has her own talk radio show. I’ve listened. I may disagree — but she’s great! Sean Hannity took note of this as well, saying:

"I got a say this, I mean his own daughter works with both of my places in radio and TV. Who is he talking about because our incapacity is their livelihood?"

Exactly. And one presumes the Senator is not urging his daughter to quit either Fox or her radio show in protest. By definition, in fact, Ms. McCain’s role at Fox and on her own radio show is to be exactly a “bombastic loudmouth” - along with every other television and radio commentator at Fox, CNN, MSNBC and wherever else in the television and talk radio universe they may be.

Needless to say the reason Fox and talk radio and also the Internet and its various conservative sites like this one here at NewsBusters have drawn the wrath of the “mainstream media” is for a reason no more complex than that the old media’s monopoly has been not just disrupted but completely destroyed. The nation no longer listens to the stand-alone views of the New York Times or the Washington Post and the old alphabet threesome of broadcast networks ABC, CBS and NBC and simply nods its head. Indeed, the Senator’s own recent vote to kill the so-called “skinny” ObamaCare repeal bill is a case in point. Winning praise from the usual liberal media outlets, McCain is being scorched in the world of conservative media. Samples?

John McCain: Traitor to the conservative cause

The story ends with this:

“For American voters expecting their Republican-dominated House, Senate and White House to honor their years of repeal promises and actually, well, repeal Obamacare, McCain’s thumbs-down was a face-slap moment that will be remembered in history as a textbook classic case of political betrayal. McCain may feel liberated. But his name will go down in conservative history books as a traitor to the cause.”

Over at National Review, the inimitable Jim Geraghty headlines:

McCain’s Odd Definition of ‘Leading the Fight to Stop Obamacare’

Geraghty opens with these words from a McCain re-election campaign ad:

Next comes this quote from an Arizona media site reporting on what McCain finally did this week when he had the chance to be “leading the fight to stop ObamaCare.”

And of course, over at The American Spectator  Melissa Mackenzie headlines:

“Here’s why this is a problem for Republicans: Republican voters believe Republicans are weak and pathetic. This vote proved them right. McConnell couldn’t get the necessary votes. John Spite-filled McCain pranced around like a Cheshire cat.”

And this is before one gets to conservative talk radio - where among other Sean Hannity has been lacerating McCain. Which is to say, Senator McCain has every reason to prefer the mainstream media to conservative media precisely because conservative media is more than willing and capable of holding him - and other Republican ObamaCare supporters - to task for their bold and deliberate hypocrisy. Recall as well that this is the same Senator McCain who also said in that return-to-the-Senate speech that:

Once said, McCain promptly proceeded to vote to make certain that nothing gets done on his campaign promise to “stop ObamaCare.”

While there are hundreds example of just why the conservative media is important, this saga revolving around ObamaCare repeal is a perfect example. And understanding it there is no wonder McCain and others in the Establishment say “to hell” with conservative media.

While we’re at it? Let’s close with perhaps the week’s most amusing moment in the media. It seems that the new White House Communications Director Anthony Scarmucci sought out The New Yorker’s Ryan Lizza (full disclosure: Ryan is a CNN colleague) and delivered an on-the-record profanity-laced scorcher about internal White House politics. Like a mouse to cheese the media lasered in on Scaramucci’s profanity, professing astonished horror because, you know, this kind of thing just doesn’t happen. Cue my research instincts to this CNN story from April of 2011. The title?

And who, pray tell, did CNN select as number one and number two in this Scaramucci-like category?  Number One was…drum roll please - President Barack Obama. And Number Two? That would be Vice President Joe Biden. The list, it must be said, is admirably bi-partisan. Number Three was ex-Vice President Dick Cheney and Number Four was…oh noooooo…somebody named Donald Trump! The list sails on with names present and past deemed as having foul mouths worthy of note. They included George W. Bush, John Kerry, Bill and Hillary Clinton, Rahm Emanuel and more.

The point? While Mr. Scaramucci has doubtless learned a lesson about on-the-record versus off-the-record, the notion that his obscenity laden chat was somehow something an aghast Washington has never heard before? Um….no. Laughably no.

Meanwhile? North Korea launches another ballistic missile, this one landing in Japanese waters. That, most assuredly, is no laughing matter. As well as being a reminder, along with the news that Republicans have failed on ObamaCare repeal, that there are in fact serious things afoot in this world. And that while Senator McCain - who, by the way, made Number Twelve on CNN’s Foul-Mouthed Politician list - may not like the existence of conservative media, there are reasons for it.

All of them good.