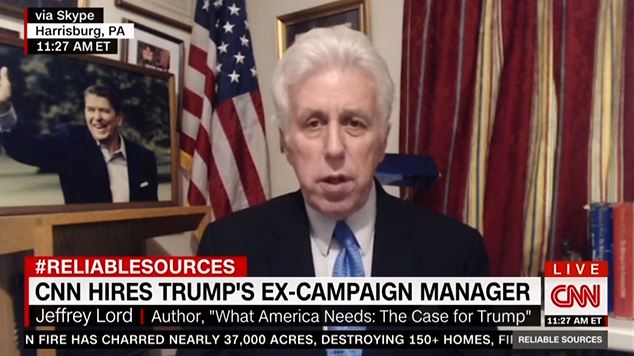 So. Over at The Washington Post this week, I see that columnist Callum Borchers is upset with me.

The reason, it seems, is that in an appearance on CNN’s Reliable Sources with Brian Stelter I had the audacity to say the following in a discussion about the current fashion of “fact checking” in the media. I made bold to say this, as quoted by Mr. Borchers:

I think the best fact-checkers in a presidential campaign are the opponents, in this case Hillary and Donald Trump. I think they do a better job of countering the assumptions of the other candidate than fact-checkers.

I mean, I hate to be the dissenter here, and I'm not saying this because of Donald Trump, but I honestly don't think this fact-checking business — as we're all into this — is anything more than, you know, one more sort of out-of-touch, elitist, media-type thing. I don't think people out here in America care. What they care about are what the candidates say.

Borchers was not pleased. Thus he launched, headlining: “Jeffrey Lord’s absurd claim that media fact-checking is ‘elitist’.” A few graphs in, he sniffs:

Let's just note right off the bat that Merriam-Webster's definition of "journalism" reads, in part, "writing characterized by a direct presentation of facts." Reporting facts is literally the definition of journalism.

The first principle of the Society of Professional Journalists' code of ethics is "seek truth and report it." Again, seeking the truth — the facts — is Job No. 1 for journalists. Lord says doing this job is "elitist" and seems to suggest (or at least imply) that reporters ought to be nothing more than stenographers, relaying "what the candidates say," since that's what voters care about.

Well. Alrighty then. I’m very pleased - make that very, very pleased - that Borchers understands the definition of journalism. The question? When will he explain this to The Washington Post? Or his brethren in the larger mainstream media?

My NewsBusters colleagues Brent Bozell and Tim Graham took note of my Reliable Sources appearance here in which they absolutely shred the clear liberal bias over there at PolitiFact. After listing one example after another of how liberals at PolitiFact play the “fact checking” game, Bozell and Graham note:

In fact (that word again) the entire NewsBusters site is filled 24/7 with examples of how the liberal media — yes The Washington Post included — has a mystifyingly non-existent relationship with “the facts,” manipulating them as needed when not ignoring them altogether.

I myself took note a couple years of a particularly flagrant example at Mr. Borcher’s Washington Post, as seen here. To briefly recount, the example at hand arose with the Post’s obituary for its late executive editor Ben Bradlee. I must confess I was always something of a Bradlee fan, his rascally charm and blunt spoken ways impossible to resist. Yet in his very blunt spoken fashion, Bradlee himself was unafraid to admit that yes, when he was the Washington Bureau chief for Newsweek, he quite deliberately concealed the facts of an explosive story.

The long and short of the story is that in the fall of 1964 when his own sister-in-law, Mary Pinchot Meyer, was found murdered on the C&O canal path in Washington, Bradlee and his wife discovered her journal — a journal that revealed Mary Meyer had been having an affair with one of Ben Bradlee’s recently deceased best friends — President John F. Kennedy. Bradlee, writing of this in his 1995 memoirs, admits to being “stunned” and feeling “betrayed” that his buddy JFK was having an affair with his then-sister-in-law.

Bradlee goes on to admit that he said not a peep about this, and was outraged in 1976,  a dozen years after the murder, to find that the National Enquirer had obtained the journal, with the paper explosively stating that not only had the two lovers been carrying on an affair in the White House but marijuana was involved on three occasions. Oh yes, there was the involvement of a well-known CIA official in all of this. Writing about the Enquirer’s story a full 31 years later — Bradlee says he knew where they got the diary from, was angry that it had been turned over, and added this:

It is important to say that I never for a minute considered reporting that it had been learned that the slain president had in fact had a lover, who had herself been murdered while walking on the C&O Canal. Mary Meyer’s murder was news, not her past love affair, I thought then, and part of me would like to think so now.

My point?  Not a word of this non-reporting of a major news story made Bradlee’s obituary in the Post…in 2014. That being fifty full years after the original events transpired in the middle that years presidential campaign and the New York campaign of Robert Kennedy to win a seat in the US Senate. Which is to say, the facts of a major news story that was deliberately suppressed for decades still didn’t make the wrap of Bradlee’s colorful career.

Ahh but that was so long ago, right? Yet what are we to make of another story - a major story filled with facts - that the Post-owned (at the time) Newsweek magazine spiked…in 1998? Surely Borchers recalls that Newsweek had the goods on President Clinton and his dalliance with Monica Lewinsky — but refused to publish the “facts.” This time around the New Media — specifically the Drudge Report — came to the rescue and broke the story — with the additional story that Newsweek had the facts but wouldn’t report them.

Yes, 1998 too is a while back, although not as long ago as 1964. But the organizing principle - withhold the facts to protect liberal media favorites is exactly the same. Come to think of it? Doesn’t The Washington Post have a reporter who covers the Justice Department? (Answer: yes.) So why in the world does the current story about Attorney General Loretta Lynch having a secret meeting with former President Clinton --- he the husband of the subject an FBI investigation and a potential target himself for his role with the Clinton Foundation - get discovered by a morning TV anchor in Phoenix? Does the Post not cover the AG’s travel? Schedule? Take note of whom she meets with and doesn’t meet with? Those are all facts - yet they didn’t show up in the Post (to their credit on the front page) until a local guy had stumbled into the story.

One could go on in chapter and verse about the liberal media and their relationship - or non-relationship -to the “facts” that Mr. Borchers insists they are so devoted to reporting. The times when they withhold the facts, spin the facts, massage and manipulate the facts or just plain dismiss the facts. Where is the network coverage of Secret Service officer Gary Byrne’s new tell-all about the Clintons?

Borchers himself asked the question --- using the occasion, predictably, to diss the book. But of course. As with the non-reporting from Bradlee on JFK and Bradlee’s own sister-in-law or Newsweek’s spiking of the Clinton-Lewinsky story, these kind of facts are unwelcome and therefore must be dissed when not missed.

Been reading the intense coverage of the June 26th mass shooting at a South Carolina night club — where the shooter was taken down by another customer who had a concealed weapons permit?

No, huh? That’s why NewsBusters exists, because stories like this one are ignored by the Post and other media because it has inconvenient facts that don’t fit the Post’s or the liberal agenda on gun control. Kudos, by the way, to The Federalist for covering this story out of Spartanburg as originally reported here.

If you were a viewer of  ABC and NBC? As of June 30 both networks had skipped the aforementioned Bill Clinton/Loretta Lynch story. Naturally, they have since dawdled their way to the facts by now.

How about the news that Hillary Clinton’s top aide Huma Abedin had testified in a deposition to Judicial watch over Hillary’s e-mail scandal? Silence on this interesting fact from CBS and NBC.

One could on. And on and on. In fact, happily, NewsBusters and the Media Research Center does go on and on daily revealing exactly how the liberal media deals with the “facts” Callum Borchers is so insistent are the true object of the media’s quest (see above for Borchers's references to the dictionary definition of journalism and their code of ethics).

Later, he concedes that:

Lord is right about this much: Americans hold a pretty dim view of the press. Trust in the media is at a historic low — just 40 percent, according to Gallup. Based on that sorry statistic, we can conclude that many voters doubt whether fact checks really contain facts.

Here Borchers finally gets it right. The media — The Washington Post prominently at the top of that list of media — are not trusted because millions of Americans have long since realized they are simply refusing to do the job they say they are supposed to do.

Seek truth and report it? Maybe fifty years after the truth is first known - as in the Bradlee/JFK/Meyer case.  Or maybe not until the Drudge Report makes it known, as was the case with Clinton/Lewinsky.  Or maybe, as in the case of the Clinton-Lynch secret meeting or that Spartanburg night club shooting? Then maybe not until somebody embarrasses you into reporting the fact. Or maybe not at all because to cover the story doesn’t aid a certain paper’s gun control agenda.

But don’t worry. When it comes to reporting on Hillary and The Donald? The Post and its fellow fact checkers at various outlets are on the job.  Honest. Really. Callum Borchers says so. If I may borrow from the Borchers headline? Absurd, elitist - and decidedly biased.