It started Monday as a simple suggestion by former NFL quarterback Michael Vick that free agent Colin Kaepernick might rehabilitate his image with the league by cutting his afro. Now it's erupted into a war of words between ESPN and Fox Sports 1's Jason Whitlock, who called his former employer the "PC, Safe Space Network."

Vick, whose NFL career was interrupted by prison time, before returning to the league, was asked Monday by Whitlock about how Kaepernick might improve his image in hopes of a return to the NFL. Vick responded that Kaepernick should cut his afro and create a more presentable image.

This is the most preposterous thing I've ever heard Michael Vick say. You know, I feel like Vick feels like he’s indebted to the National Football League for the opportunity that he got. … So, to him, it’s a familiar playbook that he sees that Colin Kaepernick needs to follow in order to get another opportunity.

But here’s the difference: Colin Kaepernick was just exercising his First Amendment right. Michael Vick committed a felony dog fighting. So the fact that he’s trying to compare, trying to make this situation seem apples to apples, to me is just preposterous.

Whitlock, a former ESPN employee, called out Woody for hypocrisy: “ESPN’s Damien Woody, while wearing a suit, tie and short haircut, called Vick’s advice ‘preposterous.' And then Woody and former NFL running back Thomas Jones had the nerve to come at the King over Twitter, with Jones calling me a ‘coward.’ My name was on the Twitter streets. Big mistake. Woody, Jones, you ain’t ready for these journalism corners. I’ve been out on these streets since 1990."

Jason Lisk, of The Big Lead, a news blog that is owned by the Gannett Company and is a sister property of its flagship newspaper, the Left-stream USA Today, reported on the Twitter feud.

Over a 15-minute span Wednesday, Whitlock referred to the "PC culture at ESPN" and ESPN talkers whining about "microaggressions." He tweeted that Woody is "on the Safe Space Network. Product of his environment." And that Woody is 11 years younger than he is and is from a "baby soft," whiny generation. 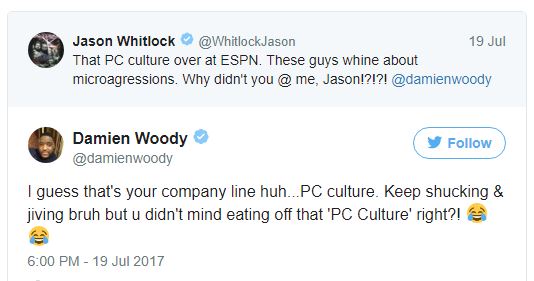 Whitlock answered that he has 20 years "on the block" and that boxer Floyd Mayweather "wishes he had my record."

Woody's final response was: "Dawg you've been put in the pasture....go ahead & graze gracefully over there collecting that check"

This looks like a battle that will continue between the rival sports media. Whitlock and many others have come up with some nicknames that don't flatter ESPN, but certainly describe it truthfully. The leftward-maching network is definitely PC and Safe Space, and it can also be described as the Kaepernick Apology Network.