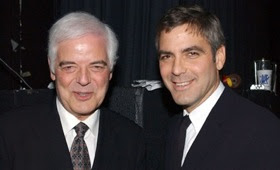 Democrats love their celebrities, and academia, well, they'll settle for celebrities' fathers. Cinncinatti.com's John Kiesewetter reports that Nick Clooney, George's dad, will be the "distinguished journalist in residence" at the American University in Washington D.C.

Unlike his son, Northern Kentucky University’s most famous dropout, Nick Clooney has practically no formal education since graduating from St. Patrick High School in Maysville in 1952.

Although he frequently lectured at area campuses, nobody asked him to join a faculty until American University proposed he spend the 2008-09 academic year as the “distinguished journalist in residence” beginning Monday. It’s part of the partnership between the school and Newseum, a 250,000-square-foot museum in Washington dedicated to news.

“It never occurred to me to teach, so I’m not at all surprised that it never occurred to anybody else,” he says from his home about 50 miles southeast of Cincinnati. He’ll teach opinion writing this fall and a spring course based on his 2002 book, “Movies That Changed Us.”

"Movies That Changed Us." Doesn't that sound like just the title you'd expect for a book written by the father of a movie star?