On Thursday's At This Hour With Kate Bolduan, Virginia Representative Dave Brat called out CNN and the rest of the media. In an interview about last Friday's failure to repeal and replace ObamaCare in the House, the Republican congressman and House Freedom Caucus (HFC) member ruled that "It's always the mainstream media, et cetera, likes to hit conservatives."

Brat's remarks came hours after President Donald Trump posted on Twitter and attacked the HFC: "The Freedom Caucus will hurt the entire Republican agenda if they don't get on the team, & fast. We must fight them, & Dems, in 2018!"

Brat was not deterred by the President's tweet. "I don't take it as a threat. All the conservative commentators know this bill is polling at 17%," he responded.

He touted that his fellow HFC members were close to supporting the bill to repeal and replace ObamaCare. "We all ran on exactly the themes the President ran on," he said. "We're with him, but someone's gotten into his ear. And yesterday, right, two days ago, the Senate also -- I can't believe this wasn't covered by the news -- Republican leadership in the Senate said they're not going to repeal ObamaCare in this process."

He added, "We were that close on the insurance regs. A few things tied together will lower prices," he said. "That was an offer of goodwill that was made in good faith to get to a yes. That package was not accepted because moderates were peeling off in the droves, right?"

"And that is the underreported part of the story here. It's always the mainstream media, et cetera, likes to hit conservatives," Brat continued. Bolduan replied that moderates objecting to the bill was covered by her employer.

Nonetheless, Brat and Bolduan shared a good laugh at the end.

Here is the transcript of the March 30th exchange:

At This Hour With Kate Bolduan

KATE BOLDUAN: Let's get some reaction to this. Joining me now is Republican congressman from Virginia, Dave Brat, a member of the House Freedom Caucus. Congressman, thank you so much for joining me.

DAVE BRAT: You bet, Kate. Great to be on.

BOLDUAN: Thank you so much. You've seen the tweet. You heard Phil Mattingly's reporting. Are you spooked by the President?

BRAT:  No, I think whoever's advising him, has his ear right now -- we all ran in the Freedom Caucus on exactly what president trump ran on, right? Cleaning the swamp, repealing ObamaCare. The bill in front of us doesn't fully repeal, so we can have that debate, but the polling for the bill right now is at 17% of the American people, right? We can do better than that, and we are all getting to yes for President Trump on this bill, but we have to make it better. You have to lower prices. Prices under our bill go up 15% to 20% through 2020. That's not good for the forgotten man back home. And when you have the federal government in charge of one-fifth of the economy, that's not draining the swamp. So, we all ran on exactly the themes the President ran on. We're with him, but someone's gotten into his ear. And yesterday, right, two days ago, the Senate also -- I can't believe this wasn't covered by the news -- Republican leadership in the Senate said they're not going to repeal ObamaCare in this process.

BOLDUAN: Let me ask you this -- all of this is huge, all of you are with him, you're with the President?

BOLDUAN: You read this tweet, congressman, it doesn’t look like he’s with you. He says, "The Freedom Caucus is going to hurt the entire Republican agenda if they don't get on the team and fast. We must fight them and Democrats in 2018." Do you take that as a threat?

BRAT: No, I don't take it as a threat. All the conservative commentators know this bill is polling at 17%. All of the public policy think tanks, et cetera.

BOLDUAN: Right, but the President did not mince any words. He didn't say -- 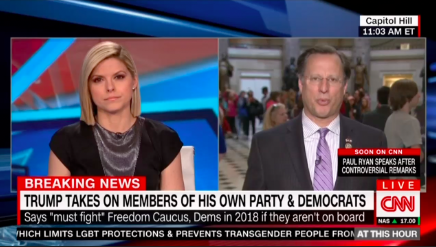 BRAT: No, I'm getting with you. And Newt Gingrich a couple days ago, everybody is saying we saved the Republican conference. When you put a bill on the floor that's at 17% favorable with the American people, we can do better than that, right? We'd better -- that's what will botch it for the Republican Party. We're trying to help the Republican Party and the president by getting it right. The process was artificially short, right? Three weeks to manage one-fifth of the economy. It's too short.

BOLDUAN: You say you're working with the President. What is he missing here? Because this does not look like a tweet written by anyone other than the President himself.

BRAT: Right. He is not being told that our group is working with all of the other groups who, by the way, was a jailbreak, right? It's all that we were against the bill. They were more moderates breaking from the bill than the House Freedom Caucus. None of that's been covered, right? The good reporting has those numbers out there. And so, what he's missing is, if we bring the price down by negotiating between our groups, we can get him a great bill, and I don't think he's being told that's the case.

BOLDUAN: So, fellow member of the Freedom Caucus, Justin Amash, he had something to say in direct response to the president this morning. I want to lead you the tweet he put out. He wrote this -- "It didn't take long for the swamp to drain, Donald Trump. No shame, Mr. President. Almost everyone succumbs to D.C. Establishment." Do you agree with Justin Amash?

BRAT: I never get into the personal stuff. I just stick to policy. We can make the policy better here. It is true that it is very hard to drain the swamp, and when you start managing one-fifth of the economy and all that goes with it up here, right, it's very hard to drain the swamp when you take on one-fifth of the economy. And we're all okay, right, pre-existing conditions, the safety net piece, the $100 billion for high risk pools back home. The House Freedom Caucus is fine. There's been misinformation on that that I don't think has reached the President's ear.

BRAT: We're being constructive, but the one thing we have to have is free markets in the insurance space, or you end up like with the financial crisis ten years ago. We let the federal government-run housing. That resulted in a financial crisis, and we're still dealing with the repercussions.

BOLDUAN: So, congressman, Paul Ryan said in an interview, which is pretty linked to what the President's tweeting, that he's worried if you guys don't get on board, that the President is just going to strike a deal with Democrats to change ObamaCare. Are you afraid of that?

BRAT: No, I'm not afraid of that. Paul's got it right, but he can get us on board like this, right? We were within two points on insurance regs. If the Speaker says yes to those couple things, we're a yes, right? But you have to have --

BOLDUAN: Look, if you were that close, congressman, what happened Friday never would have happened. Let's be honest.

BOLDUAN: If you were that close to striking a deal, what happened Friday when you guys had been running on repealing and replacing ObamaCare for seven years, letting it fail like that as it did Friday, if it was as close as you're saying right now, that never would have happened. Let's be honest.

BRAT: Logically speaking, you would be correct, but that is what happened. We were that close on the insurance regs. A few things tied together will lower prices. That was an offer of goodwill that was made in good faith to get to a yes. That package was not accepted because moderates were peeling off in the droves, right? And that is the underreported part of the story here. It's always the mainstream media, et cetera, likes to hit conservatives. I'm --

BOLDUAN: I promise you --

BRAT: With James Madison and --

BOLDUAN: I promise you, I'm talking to moderates as well. I've got to run, and I know you do, too.

BOLDUAN: How does it feel -- and I know you said you're not going to get into the personal, but let's talk personal, congressman. How does it feel to be lumped in with the Democrats in an attack coming directly from a Republican President of the United States?

BRAT: I don't care who I'm lumped in with. I love everybody, everybody knows that. We get along, it's just a matter of getting good policy. So, the personal stuff just confuses and gets in the way of good policy, which is what we've got to get to.

BOLDUAN: Congressman, thank you so much for your time.

BOLDUAN: Thanks for your time. I appreciate it.

BRAT: You bet. Thanks, Kate.